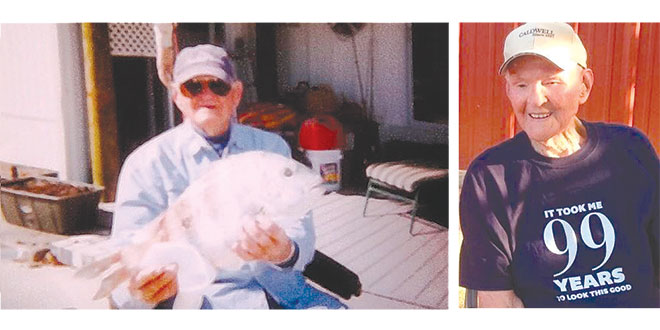 Life has been good in Goodland for J.W. “Dub” Abbott, who will turn 100 years old this month.

The Drop Anchor resident was born May 2, 1914, in Checotah, Oklahoma, to Wayne and Beulah Abbott, who had five other boys and one girl; his youngest brother is only 93 years young.

He says his mother gave him his initials because her other sons had all been given nicknames, and she didn’t like that. She thought that her method would prevent him from being nicknamed; he’s been known as “Dub” all his life.

Growing up with in a family of six boys, there was always something going on. They lived on a farm three miles from Checotah. Their father was a county commissioner and very active in the community. Two of his brothers and his sister were teachers in a country school. In fact, one of Dub’s brothers taught his algebra class; he failed and had to repeat it.

As a teenager, Dub and his older brother would hop on freight trains and take trips, and they never got caught. Having only traveled short distances, in 1932, they decided to go see an aunt in Texas. He attributes these trips for showing him so much of the country he would otherwise not have seen.

Dub went to Oklahoma State for three semesters, before deciding that college wasn’t for him. He joined the Marines in 1934 while at the World’s Fair in Chicago, and attended boot camp in Paris Island, South Carolina, later being sent to Virginia. He requested a sea assignment, and in 1935, he toured the Caribbean as he headed to California. It was there he boarded the aircraft carrier, USS Lexington. He spent a good part of 13 months anchored off Long Beach, California, and didn’t see any combat.

After returning home from the Marines, he married Mary Buckmaster in 1939. They farmed near his childhood home for several years before purchasing it after his father passed away. Dub’s four children: JoAnn, Tom, Jim and Bill, were born while living on the farm near Checotah. He now has 12 grandchildren and 12 great-grandchildren.

Each winter, the family would visit Florida and rent a cottage so Dub could fish with friends. In 1985, they stayed for two months in a rented cottage on Henderson Creek until friends of theirs — living in Drop Anchor — told them of a unit for sale. When they left in the spring of 1985, they were proud owners of a trailer in Drop Anchor here in Goodland.

Dub absolutely loved Drop Anchor. His fishing boat was only a few yards from his front door, and he could be out into the Gulf and on way to his favorite fishing hole in about 15 minutes. His favorite fish to catch was the Sheepshead.

“Twenty-nine years ago, we could catch all the Sheepshead we wanted; no size limit and you could keep them all. Sometimes four or five boats of fisherman would go out 15 to 20 miles grouper fishing, and there was no limit on them. We would sell our catch at the Fish Market, and that money paid for the gas for our next day of fishing,” said Dub.

He recalls that every morning, the Drop Anchor docks were crowded with fishermen getting ready to go out for the day, but says fishing has changed the past few years. Now a fishing license is required, and there are regulations on the size and number of fish you can catch; plus, the fish just aren’t as plentifully.

Dub was living in Drop Anchor when it was purchased by the residence and given the name Drop Anchor Mobil Home Association.

Not only has fishing changed in Dub’s 29 years living in Drop Anchor; Dub has changed, too. He cannot see or hear as well as he once could. He’s lost a hip, and lost so many good friends. Dubs wife passed away in 2004. Still, he loves to fish, and he’s able to, thanks to his son-in-law, Don Methner, who has helped him fish these past eight years.

In 1992, Dub and his first mate were part of the cast in the movie, “Gone Fishing.” He was paid $100 each day for his boat, and the men were paid $60 each. They only worked about a week filming the movie.

Hurricane Wilma hit several homes in Drop Anchor in 2005, and Dub’s daughter, JoAnn, and her husband traveled to Goodland to help repair the damage done to his home. Wilma was responsible for damage to many other trailers, and Dub remembers how everyone joined together; neighbors helped neighbors.

The following year, Don and JoAnn purchased Dub’s trailer, but he continues to visit as much as he possibly can. In 2008, an infection in his left hip left Dub unable to walk, but he still gets all around Goodland in his power chair.