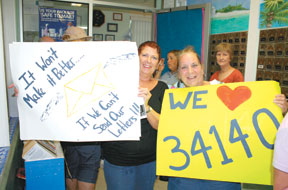 Goodlanders came out to support the Post Office. SUBMITTED PHOTOS

Goodland is buzzing with activity as more and more residents travel back to our fishing village for the winter months. With so much going on and only a small section of the Coastal Breeze to utilize, this will be the first edition of what I like to call “The Goodland Gazette.” Utilized only when necessary, “The Goodland Gazette” is a newspaper inside a newspaper, created to give readers the scoop on all things good in Goodland. Enjoy!

The first Goodland Civic Association Meeting was held on October 16 at the Community Center at 417 E. Mango Avenue. A potluck dinner was held at 6:00 pm and the meeting began at 7:00 pm. Special Guest, Collier County Commissioner Donna Fiala was in attendance. There was an excellent turnout and all in attendance agreed that the upcoming season in Goodland will be an exciting one. New members, new ideas and new friendships were formed. The next meeting will be at 7:00 pm on November 20, with a 6:00 pm potluck dinner to precede.

The Goodland Christmas Bazaar will be the first GCA-sponsored event of the season. The two-day event will be held on December 7 and 8, Friday and Saturday, from 10:00 am to 4:00 pm. Featuring artisans, crafters, collectibles, baked goods, plants, specialty spices and foods and live music, the bazaar is the perfect place to find unique and hand-crafted items for your loved ones this holiday season. The fun-for-all-ages event will be held at the Goodland Boat Park.

For those interested in a booth at the bazaar, vendor space is available but is limited. The cost per vendor is 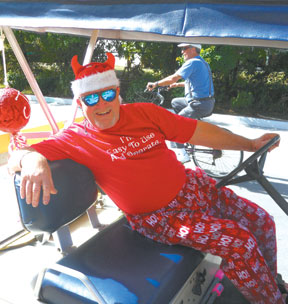 $60 for both days with a special discount to Goodland residents. To register as a vendor, to volunteer or for more information, contact Connie at 239-734-5523 or at goodlandfl@aol.com or Noreen at 262-203-2423 or at noreenseegers@hotmail.com.

Over 60 Goodlanders gathered in and around the Goodland Post Office on October 17, braving torrential downpours to hear the results of the 350 mail-delivered surveys sent to P.O. Boxes in Goodland by the USPS.

According to Postmaster Richard Barber of Naples and Golden Gate, 96 percent of the surveys that came back requested a realignment of Post Office hours rather than alternatives such as mail boxes or closing the Post Office altogether. “Listen to me and listen to me good. We are not closing this Post Office. We are going to put in a request to adjust the hours,” stated Barber. “The big change will be the administrative hours that we spend here. If we do a little tweak in the 28,000 Post Offices nation-wide, we can cut enough costs to keep from closing these places, and that’s what we’re out to do.” The 28,000 Post Offices referred to are those similar in size to the Goodland Post Office that are also being considered for changes and possible closures.

Barber suggested that these changes may not be known until January but good news was delivered early. On October 22, a letter was handed down from the USPS Facilities Coordinator stating that the review of the Goodland Post Office has been concluded.

The letter states, “It has been determined that effective 01/12/2013, the GOODLAND PO will provide 6 hours of window service each weekday. The facility retail hours 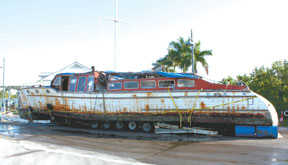 The Red Baron rests at the Goodland Boat Ramp.

will be from 9:00 am to 4:00 pm with lunch from 12:00 pm to 1:00 pm on Monday through Friday. Current Saturday window service hours will not be reduced and access to delivery receptacles will not change… Customers will have access to their mail receptacles 24 hours a day and Post Office Box mail will be available daily for pick-up by 9:00 am Monday – Friday, and at 9:00 am on Saturday.”

Many Goodlanders have been following the story of the Red Baron boat that owner, Craig Jones of Marco Island, is trying to salvage. The historic 63-foot yacht was built in 1935 for a West Coast Sears executive named Stanley Donough. It was a vacation destination for President Franklin Delano Roosevelt and it even crossed through the Panama Canal to make its way to Florida.

In desperate need of repairs, Jones attempted to pull the boat out of the water using the help of a crane at the Goodland Boat Ramp. The Red Baron put up a fight and nearly broke in half as she was pulled to dry land. With damages worse than originally thought, it wasn’t safe to move the boat any farther and she now sits at the Goodland Boat Ramp as plans to approach her next big move are under way.

Stay tuned for the next edition of “The Goodland Gazette.” When exactly that will be is really anyone’s guess.