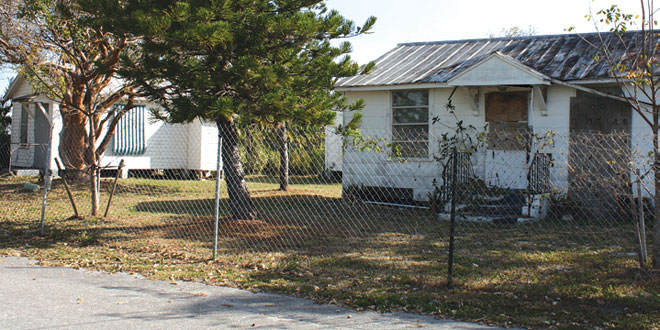 Save the historic cottages! Join the GAA (email me for details) and let’s get this restoration under way!

This is issue three or four of what I like to call the “Goodland Gazette,” a newspaper inside a newspaper. When there are myriad topics to be covered pertaining to Goodland, I like to break it down, dissect it, examine it and share the you-know-what out of it with our readers.

Holiday Bazaar not so Bizarre

November 16 and 17 are/were (depending on when you read this) the dates for the annual Goodland Civic Association Holiday Bazaar. Over 60 vendors, 10 musicians and food of all varieties will be/were featured at the event which is/took place at MarGood Harbor Park.

A grand STAYCATION raffle is being/was held, featuring a two-night, three day stay at the Marriott, a sunset cruise by Dreamlander Tours, dinner for two at the Snook Inn and two tickets to the performance of your choice from the Marco Players. The drawing will be/was held on Tuesday, November 19. Check the next Goodland Life for the name of the lucky winner! If YOU are the winner, you will be notified – you won’t have to check the paper – just for clarification purposes.

We’re glad you came or sorry you missed it, but either way, you can rest assured, knowing the fifth annual Holiday Bazaar will be just as spectacular, if not even better.

Is Anyone Hungry Yet?

I know I am! Buzzard Punches, creamy garlic salad dressing, stone crab claws, chowders of all varieties, lobster, grouper, soft shell crab, salad bars, seafood pastas and so much more await at Goodland’s fine establishments. With four eateries to choose from featuring varied menus, atmospheres and musical entertainment, there is nothing left to be desired after dining in this village. I know because I’m lazy and don’t like to cook or travel far. So, as Goodland is my home, it is pretty much where I eat. While I may not have the palate of a French chef, I am a foodie at heart. My ever-changing waistline being the evidence.

So, in order of appearance as you enter the island, these are your delightful dining options: 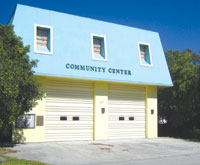 The GCA and GAA meetings are held at the Community Center. PHOTOS BY NATALIE STROM

every day of the week just yet. But you already know that Saturdays and Sundays are in full swing!

• The Old Marco Lodge, 401 Papaya Street, (239) 642-7227: Again, call ahead to be sure the Lodge is open for lunch and dinner all seven days a week right now. After a long summer break, we all need to ease ourselves back into these things, you know? Great salad bar, great bar, great view.

• Marker 8.5, 123 Bayshore Way, (239) 394-8818: The newest establishment to hit Goodland is owned by Chef Michael Duncan and his wife Laura. They’ve spruced up the menu, the restaurant, outside dining area and docks. It is now the official un-official “Goodland Yacht Club.”

Real Estate on the Upswing

I’m no realtor, nor do I play one on TV, but it seems to me that real estate is once again moving in Goodland. By sheer observation during my daily dog walks, I have noticed two houses currently being built. I also have heard through the grapevine, as well as noticed a lack of For Sale signs in certain yards, that about four homes have been purchased.

For more information, contact your local realtor. But before purchasing, remember, not everyone belongs in Goodland, nor could they. After all, the village only fits about 300 people.

I Call this Meeting to Order!

The Goodland Civic Association has also “re-opened” after a summer break for some. As a member of the board, I am excited to announce that public meetings are held at 6 PM on the third Tuesday of every month. A pot-luck supper takes place first and the meeting begins at 6:30. Personally, I go for the food. Like I said, I’m a foodie. Just kidding, I really go out of obligation as a board member. Just kidding again. I go because the food IS good, the people are great and it’s exciting to be a part of a team that has the best of intentions in mind for Goodland. The meetings are open to 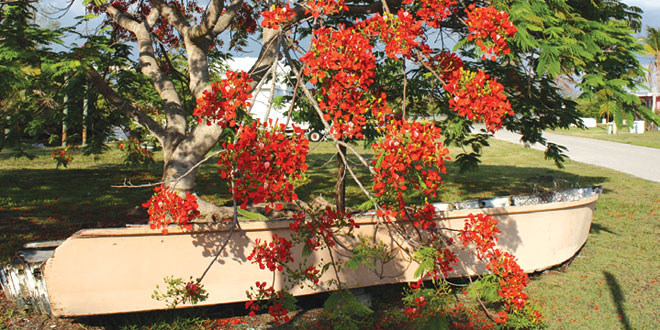 The boat on the corner of Pear Tree and Goodland Drive East lived a long and mysterious life. It will be missed by all.

the public and held at the Community Center building at 417 Mango Avenue.

The Goodland Arts Alliance also holds its meetings at the Community Center on the third Thursday of every month, beginning at 7 PM. This is also a public meeting. Anyone can become a member of the GAA, whether living in Goodland or not. Our aim (I’m also on the board – talk about over-extending) is to one day have an artist colony of sorts at MarGood Harbor Park, utilizing the historic cottages currently not in use for art, music, history and more. The organization recently celebrated its first birthday, and we couldn’t be more proud. Starting up a non-profit isn’t easy, but the reward is greater than the occasional grief – especially when seeing artists selling out their entire stock of inventory at a GAA show. Coincidentally, this happened at last year’s GAA Harbor Arts Festival.

It is with deep sadness that I pass along the word that the old peach boat on the corner of Pear Tree Avenue and Goodland Drive East has gone to a better place… Well, maybe. Failing health led to the boat’s demise. A quick demolition job followed by a bonfire sent the beloved boat right up to the heavens. (It actually really ended up in the dumpster.)

The boat, which once garnered the words “Pink House Motel,” as the hotel is just down the street, has had quite a history according to some.

It has been said that Russian spies came over on the boat, attempting to learn the secret of netting for mullet fish in the early days. Some say it simply appeared on the corner one day, as if it chose a home for itself. Others believe it chose to live a life of solitude after losing it’s first love – a dinghy of a gal who drowned after an over-zealous fisherman attempted to pull an eight-foot bull shark onto her petite frame. The arrival of the boat may be a mystery, but its presence will carry on through its one son, Junior, a teal-toned healthy young boat which resides on the property next door.

One thing is for sure, that grumpy, old, falling-apart boat will be missed but not forgotten.