The Goodland Civic Association – Controversy and Accomplishment 1995 to the Present 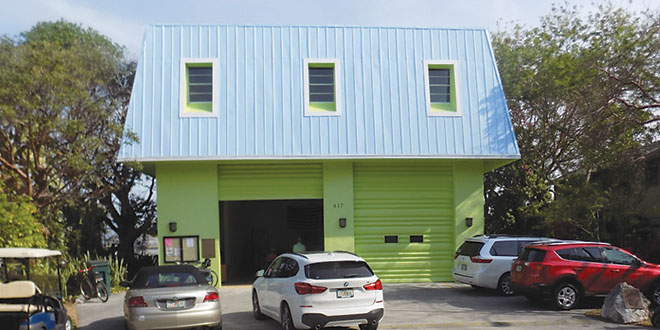 In 1992, having finally moved into a building it could call its own, the Goodland Civic Association (GCA) found itself embroiled in another situation. The results of this would later inure to the benefit of Goodland, but not without some bumps along the way. Since 1957, all of Marco Island had been governed by Collier County. (It had previously been incorporated as Collier City.) By 1990, the population had grown to such an extent, that a group was attempting to form their own government as the City of Marco Island. Goodland at this time was still a sleepy village on the margins of the island. The Goodlanders were happy with the county’s administration and for whatever reason, were suspicious of being ruled by a Marco Island city government, with a population dwarfing their own. In 1990 and again in 1993, incorporation was put up to all island voters. It failed badly both times with over 58% of voters opposed to incorporation. It was found that Goodland voters were solidly against it. This was confirmed when the sponsoring group appeared before the GCA. “They came down and asked us if we wanted to be a part of the city,” Vicki Wood recalls, “We told them in no uncertain terms that we didn’t.” Thereafter, as part of a concerted campaign to get incorporation passed on a third try, the group figured out a way to exclude Goodland from the vote. As Ed Fullmer, a past president of the GCA put it “They gerrymandered us

Goodlanders enjoy a potluck supper before every Town Meeting. Richard Welsh and Jan Bergantz serve them up.

right out of the [proposed] city.” In an August 1997 vote, over 51% supported incorporation, winning by a margin of only 181 votes. Goodland happily remained unincorporated and under the auspices of the county. This stance by the GCA was to have lasting effects, for good and for ill on the village of Goodland.

During the 90s, the GCA grew and prospered. As the members began to meet in the new Community Center, good will and camaraderie were in evidence. By 2000, the membership had grown to over 300. The community center was bursting at the seams on meeting nights. The GCA became galvanized when a new threat arose. “A Canadian corporation wanted to build multiple high rise condominiums (Dolphin Cove at Goodland) at Palm Point (where Goodland Boat Park is now),” recalled Connie Fullmer, then secretary, “We opposed it on the grounds that it was congestive and out of character for our village. It ended up in the Florida Supreme Court which ruled in our favor.” In the face of corporate money and opposed by the best property lawyer in Collier County, the GCA launched a massive campaign involving the whole community. Much of the GCA’s legal work was done by members. GCA board officers, Connie Fullmer and Pam Stop, did most of the heavy lifting. After many meetings and impassioned presentations, the county was won over and refused to issue building permits. In a related concurrent campaign, the GCA also won unanimous county approval of the Goodland Overlay, which among other things prohibited buildings 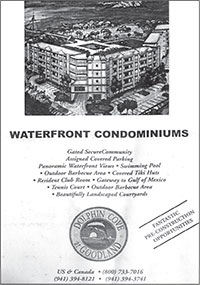 Proposed high rise condominiums were fought by the GCA tooth and nail, until killed by the Florida Supreme Court.

more than 35 feet in height. A lasting result of this campaign was the county’s purchase of the Palm Point property (for $4.5M) and the building of a boat park there. The GCA later secured the right to hold three annual events there. Building on this success, the GCA persuaded the developer of the Calusa Island Village Condominiums (where I live) to replace the planned large box-like structures with the attractive two-unit Key West designed town houses of today. A proposed 10-story condominium at Moran’s Marina (western foot of Goodland Bridge) was also nipped in the bud. Somehow, the GCA also found time to successfully lobby the City of Marco to construct a bike path along Goodland Road. Archives do exist for this period. The high energy and commitment of the board members is hard to believe. There is no doubt in my mind that their efforts saved Goodland from turning into just another Florida resort destination.

During this time of unity, the GCA hosted numerous well-attended social events and fundraisers. Linda Van Meter fondly remembers the spaghetti dinners put on for the membership. Potluck suppers became a regular feature and the hall was gradually fixed up with a downstairs restroom and kitchen plumbing to accommodate all this. Then, in July 2002, the bottom fell out.

Just days before it happened, the GCA learned that the city and county were about to sign another interlocal agreement which would turn Goodland Road completely over to the city. Frantic efforts to avert this were unsuccessful – due in no 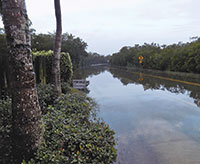 Goodland Road at an early morning spring tide, January 2016. The GCA is battling to get the county to take back ownership and raise the road to prevent frequent flooding.

small part to a divided GCA board. In September 2002, the entire board resigned and a new board was formed. A rival group, The Goodland Preservation Coalition was formed to carry on the fight regarding control of Goodland Road and the preservation of Goodland as a fishing village. In the years that followed, each faction sought to control or regain control of the GCA. The members’ meetings grew so acrimonious that deputy sheriffs had to be called in. Shouting matches threatened to escalate, and sometimes did, into shoving matches. Walkouts became the order of the day. Many members never returned. Each side accused the other of lies and election irregularities. Lawsuits were instituted. An audit was undertaken in an unsuccessful attempt to prove embezzlement of funds by the opposing faction. Board meetings were also contentious. Accomplishing anything was difficult. Not surprisingly, members became disgusted with the situation and started staying away in droves. Membership fell from about 325 in 2000 to 112 in 2008. To this day, there are still some residents who want nothing to do with the GCA because of what happened then.

In March 2008, I became secretary of the GCA. Thereafter I had a front row seat and the privilege of chronicling the amazing turn around and reversal of fortunes for the GCA. The GCA began its phoenix-like rise from the ashes in February 2009, when a trio of visionary and active presidents began leading the GCA, helping to restore it to prominence and popularity in Goodland. Mike Barbush was elected president

Past GCA President Mike Barbush shows some love for Commissioner Fiala as Nancy Simmons looks on.

for the third time in 2009, Joanie Fuller, a long time board member, in 2011, and Greg Bello, another long time board member, in 2013. Bello is still going strong. From 2009 to the present the GCA’s membership more than doubled, from 112 to 250. Our relations with Collier County have grown closer than ever. Commissioner Donna Fiala began turning up at our town meetings and pancake breakfasts on a regular basis. Joanie Fuller was appointed to Commissioner Fiala’s Island Advisory Board, where she still sits. With Fiala’s backing, the county was persuaded to take over the Goodland Water District, resulting in a 30% to 40% lowering of our water rates, instead of a 69% increase as originally predicted. The immensely popular town picnic known as the Spring Fling was initiated and is now in its 4th year. The county, again with Commissioner Fiala’s backing, was persuaded to install two automatic external defibrillators in Goodland, one of which was used, shortly thereafter, to save a life. Lastly, (and in my view, the most important) the GCA’s constant pressure on the City of Marco Island and the increasingly close relations with Collier County are getting near to resulting in the county’s taking back Goodland Road and raising it above the level of the frequent floods which are impeding traffic and undermining the road.

It takes money, a lot of money, to keep the Community Center up and running. Our members work hard at it. Our funds mostly come from annual membership dues, our two pancake breakfasts, raffles, 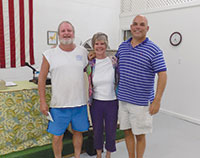 Most recent GCA presidents (from left) Mike Barbush, Joanie Fuller and Greg Bello led the GCA back to prominence and popularity.

and merchandise sales. At our popular pancake breakfasts, people ask us what we do with all the money coming in. The answer is – a lot. There is little if any left over at the end of the year. For the period, February 2016 through March 2016, the GCA had over $32,000 in expenses, with income of just over $20,000. We would have broken about even were it not for the over $13,000 in building maintenance. Luckily we had been gradually building our bank account and were able meet the extra expense. Insurance alone is about $5,076 per year; utilities $1,350. It is a struggle every year to keep things humming.

The Goodland Civic Association and Goodland Preservation Coalition, staffed by ex-GCA officers, have been instrumental in safeguarding our way of life and the character of our town. The GCA has been a constant focal point for the town and the site of many battles on Goodland’s behalf. From interviews of those who were here and a review of archives (Only archives from the year 2000 are extant) it is obvious to me that the GCA was influential in bringing about all of the accomplishments listed above. It has been my privilege to join the ranks of those who have gone before, who have labored to make Goodland a better place.