The Ghosts of Christmases Past… 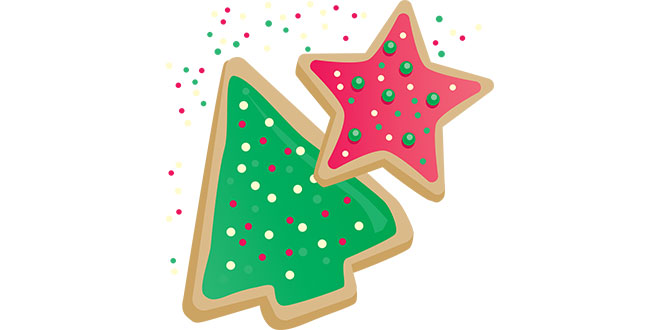 How does the song go? “It’s the most wonderful time of the year?” Really? My recollections beg to differ.

My childhood Christmases were filled with red velvet dresses, school extravaganzas, manger scenes and cookies shot out of an aluminum cookie “gun,” as it was referred to by my holiday-glazed mom. We had the traditional needle-dropping tree, large colored bulbs hanging off the gutters and plenty of family drama. It wasn’t until I became the MOM (Madwoman of the Moment) and had to execute the exacting duties of the Christmas holidays that I realized how ultimately dysfunctional our celebrations had been.

Think old-school New Jersey Christmas. Extended family was all within an hour’s driving distance of home, which required personal visitation starting at 7 AM. Whom you visited and when depended on your rank in the family hierarchy. Geographical location be damned.

If you attended Midnight Mass, you might postpone the initial visit until 9 AM. In our family, the grandparents were first on the list. Lucky for us, both sets lived on the same street. We usually hit Dad’s parents first. The “Merry Christmas” visit was brief. I could expect a hug, choking-hazard hard candy, and an envelope containing a crisp $5 bill. Bye-bye.

Up Allen Street to my Mom’s parents, who were like Santa and Mrs. Claus personified. There were gifts-galore, Entennman’s stollen and lots of Jameson Irish Whiskey. We stayed until the lunch hour when it was time to head north to Aunt Joan and Uncle Bill’s Italian Christmas extravaganza. OMG. By now, we were skidding up the icy highway to a two-story house packed with dozens of kids — many of whom we didn’t know by name — a conglomerate of back-slapping relatives who called each other “paesano,” and a carbohydrate laden-feast that could kill at first glance.

Typically, my WASP dad would disappear with a pocket-flask. My Mom would pitch-in by separating screaming, slap-happy children up since 5 AM, and my aunt and hostess-in-charge plied everyone with Pepsi and Italian cookies. The Pepsi was provided by the bottling mogul brother-in-law and pastries by the mother-in-law baker extraordinaire. Presents were exchanged, and it was off to the next stop on the holiday itinerary.

Time to drive to Union City and pay respects to Aunt Lillian. Widowed since I had known her, Aunt Lillian always gifted me with a year’s subscription to National Geographic. Next door to her apartment, which notably faced the Empire State Building, was a couple supposedly related to us known as the Freitags. One year, they gave me electric scissors.

After another dinner with the Freitags and Aunt Lillian, complete with pork and crab apples, we were headed back home and the final stop of the day, my godmother’s Christmas cocktail party. Like, who needed another beverage? Apparently, every adult who had endured the Christmas Day marathon. There was lots of laughter, a show of “what I got for Christmas” ( one year that included a demonstration of a new appliance called a “microwave”), and a plate of rock-hard frozen shrimp.

It was approximately 10 PM when my parents pulled into our driveway. My patent-leather pumps were somewhere under the seat, presents were spilling out of the trunk, and we had celebrated yet another memorable holiday.

“The best Christmas ever!”