The Frog and the Scorpion 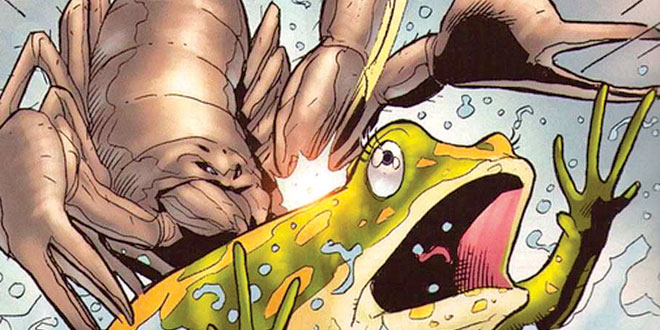 The story may be an old one; but it is effective and meaningful today as it ever was. And it goes like this: The scorpion approaches the frog that was resting on the banks of the river. “Please take me to the other side” he begs. “I will not” responds the frog, “you will probably sting me along the way and we will both sink and drown.” The scorpion pleads with the frog “I promise I will not sting you; please, please take me across.” The frog decides to give the scorpion the benefit of the doubt and allows it to jump on his back for the ride across the river. Halfway through the journey, the scorpion stings the frog; severely poisoned, dying and sinking to the bottom of the river the frog asks the scorpion “why, why did you sting me after you promised you would not?” The scorpion also sinking and drowning responds “I just can’t help myself, it is in my nature.”

My readers who followed my columns over the years and practice the fine art of “situational awareness” will figure out why I felt it was important to write the story of the frog and the scorpion at this point in time. On the other hand those who read my columns but still have their heads buried in the beautiful white sands of Marco Beach may not!

A few days ago, when I was asked if I was not “inspired” to turn in a column for the next issue of the Coastal Breeze, I had to resort to the infamous concept of “plausible deniability” in my response. My response was yes and no; it depends.

Truth be known, I am always inspired to write for the Coastal Breeze. I happen to think that this newspaper is by far the best on Marco Island and Collier County, bar none! Once in a while, I think I over-analyze events; look deeper into things than I should and somehow get myself into a state of mind my wife calls “in a funk!”

I think that is where I am now, in the land of funk. As I listen to the world news, read the local and national newspapers and talk to my friends around the Island, I get myself into the over-analyzing, deeper than necessary thinking mood and feel “depressed.” How else can one feel when one sees men with meat cleavers in their bloody hands talking about God and equality while their beheaded victim lies in a pool of his own blood in the middle of the street in London? How else can one be expected to feel when bands of youth burn and destroy hundreds of cars and attack one another in the streets of Stockholm? How else can one feel when people who came to this country claiming asylum from tyranny use bombs to kill fellow Americans in the streets of Boston? It is at moments like this, I want to remove myself from reality; get on my knees and thank the founding fathers, the authors of the Constitution who made sure we lived in a free country for as long as the Republic lasted. We as Americans cherish our rights and our Constitution which has stood the test of time many times over. We as Americans believe we can say what we want, when we want, wherever we want without fear of retribution or punishment. We as Americans sincerely believe that we may possess certain outlandish ideas which many may not agree with; yet we know we are protected by our constitutional rights to possess these ideas.

In short, we as Americans feel safe and protected because our forefathers wrote a Constitution with unbelievable foresight, precision and intelligence. No other country around the world can claim to possess a better roadmap than the Constitution of the United States of America. And we naturally assume that those whom we elected to run the daily affairs of our country understand the meaning of the Constitution and think and believe like we do.

Then, I think of the scorpion and the frog… I take a quick look around me and notice we are in the middle of the river… And I get a sinking feeling…