The Fourteenth Day: JFK and the Aftermath of the Cuban Missile Crisis 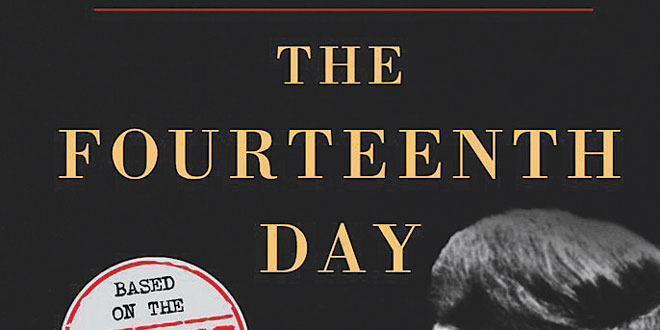 Oh, to be a fly on the wall! Almost everyone has uttered that phrase at least once in their lifetime, yearning to be an inconspicuous observer taking in details of conversations to which they are not privy. In other words, the good, juicy, unadulterated, unadorned nitty gritty. The Fourteenth Day is a chance to be the fly and witness real-time history during a very crucial event. Filtered through the author, of course.  Because last October was the 50th anniversary of the Cuban Missile Crisis, there was a plethora of books published on the subject last fall. I chose to read The Fourteenth Day because it was written by a history professor who had access to JFK’s latest secret tapes that were just released last year. I didn’t really expect to learn anything new, just wanted to eavesdrop on the thought process of Kennedy’s advisers and policymakers.

I thought I knew what happened during the missile crisis. I was a sophomore in high school and during the crisis, we were allowed to carry our transistor radios with us at school – we just had to turn them off during class. The instant the bell rang, 40 girls turned on their transistors, slapped them to our ears and silently moved on to the next class. I had two brothers in the military, and everyone had someone in the military – it was the days of the draft, so most males served at least two years. Plus, there was the real possibility that many of us civilians would be wiped out by as well, so everyone was glued to a news source throughout the day. There were services every night at the churches, which the priests and ministers said had not been that packed since World War II. Little kids were planning Halloween and the rest of us wondered if the world would still be here or how damaged it would be. Obviously, most of my memories involve the psychological impact of that event, not the political or strategic aspect.

Because Robert Kennedy’s memoir of the crisis was named Thirteen Days, it is imprinted in our minds that the crisis lasted 13 days. Hence, the title, The Fourteenth Day was chosen by Coleman to cover the events that occurred from the formal end of the crisis – October 28, 1962 – to the time the administration considered it cooled, approximately February 1963. Yes, they knew Cuba was a tinderbox and there was a high likelihood they would have to revisit the topic at some time, but it was controlled.

That JFK was secretly taping some conversations, phone calls, and dictations was known only to a handful of people in his White House. He intended to use the recordings for his memoir which he would write at the end of his second term as the youngest elected President of the United States. Although his most prolific taping was during the October 1962 Cuban Missile Crisis, he did not stop taping at the official end of the 13-day crisis, October 28. The taping continued well beyond that. Those are the tapes, less than five percent of which were redacted, Coleman draws from the most.

As I mentioned, I lived through the missile crisis, thought I knew it, and have read other books and articles about it (mostly written by people involved in it, so objectivity questionable). But, The Fourteenth Day offers the 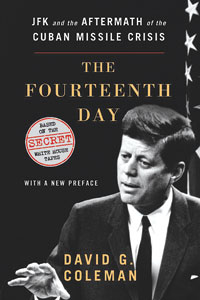 kind of nuances and perspective that can only come from time, removal from the event, and of course, the straight from the horses’ mouths information provided by the tapes. I doubt Coleman was alive when the crisis occurred, and as far as I know, none of the major players in the event are still around. With these secret tapes, along with his own expertise in nuclear and defense policy at his disposal, the author offers an interesting perspective.

According to Coleman, Khrushchev backed down in Cuba, removing the nuclear warheads, not because of JFK per se, but because he never intended to go to war with the United States, just to hold the threat of war over our heads. After the Bay of Pigs, Castro aligned with the Soviet bloc and asked for protection against another possible US invasion attempt. Khrushchev could not deny help to an ally without losing face, plus, according to Coleman, he was using the buildup in Cuba to force the US out of West Berlin. He thought the West was “too liberal to fight,” and that JFK was soft, a weak leader. Khrushchev withdrew the warheads because of the combative rhetoric from Fidel Castro and Che Guevara. He feared Castro would start a war with the US, which he did not want. Castro declared that Cuba would be destroyed before it was invaded again. In real time, both leaders, Kennedy and Khrushchev, were dealing with a multitude of unknowns. The biggest unknown was how reliable their sources of intelligence were. Here in the US, Kennedy was dealing with an adversarial press, monstrous leaks of information, and facing midterm elections in a matter of days, Khrushchev was dealing with his own adversaries in the Politburo who wanted him out.

Kennedy’s relationship with the press, “on the pebbles if not the rocks” (Fletcher Knebel in Look, August 1962), did not improve much during the crisis. There was a brief rally-round-the-flag effect, but after October 28, 1962, the press were in full attack mode. Kennedy actually had the FBI investigating some journalists to the extent that at least one journalist was wiretapped and had late night visits at his home by FBI agents. Once Edgar J. Hoover objected to his agents being used that way, the task of keeping tabs on the press was handed off to the CIA. Kennedy was looking for leaks, not intending to gag the press as they claimed, according to Coleman. I realized anew the mammoth problem JFK faced with the press and their demands for openness guaranteed by the First Amendment. How much was the press exercising their constitutional rights and how much were they pursuing the “business” of the press, that is being the first to break the story, for their own aggrandizement? Certainly Khrushchev was not facing the problem of having the Soviet press publish articles revealing his top-secret intelligence to Kennedy. That pesky constitution has been making politicians’ lives difficult for quite some time.

The Fourteenth Day is solid scholarship but also easy to read. It is not written in chronological order, but each chapter addresses an aspect of the crisis. In my opinion, that organization makes it much easier to follow and allows a more thorough examination of the role of the bombers, the press, the spy planes, the GOP hawks, etc. If you enjoy history, want your memory of October 1962 refreshed, or you know a young person who wonders why the Cuban Missile Crisis was such a big deal, this book is a great resource.