The Family Approach is the Right Approach for the DeHanas Group 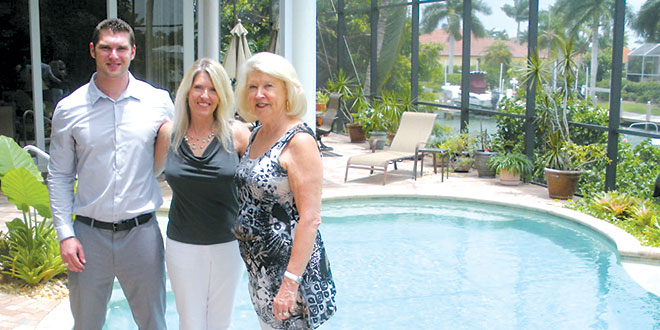 An “All for one and one for all” approach to the real estate business has worked well for the DeHanases of Marco Island for nearly two decades.

The DeHanas Group – comprised of Rachel, A.J. and Chris DeHanas – recently joined the island’s branch of Keller Williams Realty, moving from Re/Max Affinity Plus’ Marco office. Rachel DeHanas, mother-in-law to A.J. and grandmother to Chris, has been a realtor on the island since 2007.

Rachel DeHanas said the arrangement offers a number of advantages.

“You can give better service to people because you have two or three agents for one,” she said. “When they hire one of us, you’re getting all of us. That’s of great benefit because if I’m out showing a property, A.J. can answer a question, and vice-versa. We can get to our clients much faster and we get to see each other a lot more. We also get to travel together,” Rachel DeHanas added, noting that she and A.J. DeHanas will attend a conference in Austin, Texas, later this month.

Their family-style approach began in 1998, in their home state of Maryland, when David DeHanas joined his mother Rachel and his father Jack in their real estate business as the IT and Web guru. The following year, A.J. DeHanas, David’s wife, made it a foursome after obtaining her real estate license. A third generation, Jack and Rachel DeHanas’ grandchildren, were included in the fun by being featured in the business’ advertisements.

After earning her license in 1983, Rachel DeHanas became a top performing agent for two firms in Maryland, before shifting to the Marco Island market in 2007, after earning her Florida real estate license. Her success in the field was recognized by Gary W. Keller, co-founder of Keller Williams Realty, who featured her in his 2003 book, The Millionaire Real Estate Agent.

A.J. DeHanas joined her mother-in-law as an agent at Re/Max Affinity’s Marco office in 2010.

“Keller Williams has great support and training, which is really important for Chris,” she said. “And they sell more real estate on the island. To be successful, you have to be with successful people and we see Keller Williams as being very successful.”

Entering the family business was a natural for Chris DeHanas, 26, a former personal trainer who earned his real estate license in October. He grew up around the business, hanging around the office as a teen, and even posting real estate signs and taking photos of homes.

“I knew, probably from the age of 16, that I wanted real estate to be my career,” he said. “I see it as a life-long career. It’s a great opportunity. I know it’s not something that happens overnight, but if I can build relationships over the next 10 to 20 years and help people throughout their lifetimes and mine, it will mean a lot.”

Being in such close proximity to the business provided him with the opportunity to observe Rachel DeHanas’ enjoyment of the profession and her success.

“I think he sees me after 30 years and that I’m still involved and still enjoying it,” she said. “This is something that’s in your blood. You either like it or you don’t. You’re either good at it or you’re not.”

Chris DeHanas described being able to get started in the real estate business with his mother and grandmother as mentors as a huge plus.

“It’s great to work with family because there’s 100 percent trust, 100 percent accountability and everyone looks out for everyone,” he said. “You have motivation there, also, to do well for each other. I’ve never seen anyone work harder than these two ladies, in my life. It’s great to have that example with me to motivate me while I see how it’s done.”

Rachel DeHanas said her grandson brings a wealth of knowledge about the Naples market to the team, which meshes well with the background she and her daughter-in-law share in Marco-area real estate.

To learn more about or contact the DeHanas Group of Keller Williams Realty’s Marco Island office visit marcosunshine.com or call 239-970-6000.