I have to tell you up front that, after reading various reviews about this book, there were varying feelings as to its worth. A good many people liked it a great deal. Almost as many readers were less enthusiastic. Those who were less enthusiastic seemed to dwell on details about the writing itself, which I found perfectly acceptable. There are a number of books on the best seller list right now that, in my opinion, do not have as good a story and are written in the style of some third class romance novelist. If you decide to take my word for it, you should have no trouble finding this book.

There are a number of copies available in the library. It is also available in both hardback and paperback, Kindle, Nook and Audiobooks. Obviously, the publishers thought it would be a book that would be enjoyed by many or they wouldn’t have made it available to the public in so many different ways. There is even talk of making it into a movie.

In case you didn’t know, an expat is someone who is living in a country other than his native country. In this case, a young American couple, Kate and Dexter Moore, have moved to Luxembourg, the private-banking capital of the world, with their two young boys to set up housekeeping. He is in the business of account security for banks, both physical and cyber. Or at least that is what his wife has been told. Kate is dismayed to find that he refuses to tell her who he works for, the names of any of his clients or even where his office is. He has told her that this secrecy is needed in order to make sure the various banks’ security are not accidentally compromised by an innocent slip on her part to one of her friends.

But Dexter is not the only one with secrets unshared. Though they have been married for a number of years she has never told him that she was a former member of the CIA. 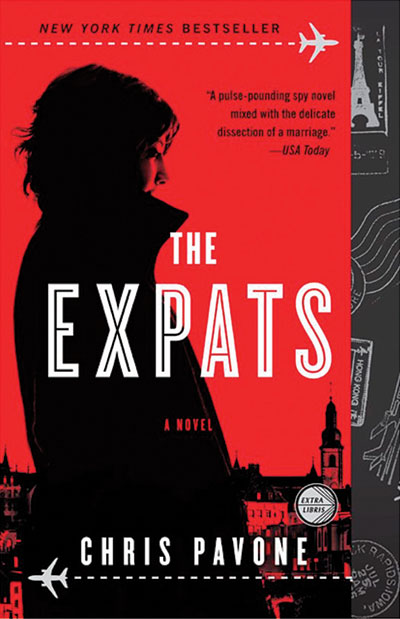 This secret haunts her, both because she feels guilty for not telling her husband that fact in general, but also because of some of the acts she had to perform while working at that job, including murder.

Dexter’s job requires him to travel a great deal and work long hours so Kate is left to settle into their new home with rented furniture and everything else they need for their daily living, until theirs arrives from the states. Her two sons are attending a private school, thus leaving her with a great deal of time on her own. She must make her way around town, with her limited language skills, and do her best to make new friends. Because they are, by far, not the only expats living in the area, this seeking of new friends is easier than it might be elsewhere as there are many others trying to do the same thing. And each of them is quick to notice when someone new has come to town and approach them to check them out.

She fairly quickly becomes acquainted with another American couple but it is not long before she suspects that they are not who or what they claim to be. The wife seems to be going out of her way to encourage their friendship, but seems constantly evasive when asked questions about her own past, even to the question of where they lived before coming to Luxembourg. Because of her own past life, Kate fairly soon becomes paranoid and suspects that the new couple is there to spy on her.

Kate’s suspicions lead her to get in touch with one of her former contacts in the CIA and to ask him to investigate what might be going on. She becomes more and more suspicious of who her new friends might be as they mysteriously turn up in the most unexpected places. At the same time she becomes more curious as to what her husband’s job actually is. And she makes it her business to find the answers to both of these questions.

This book has more layers than an onion and as each layer is peeled away we become more aware of what is really happening.

Or at least we think we do. But each layer produces another twist and lives intersect in most unusual and mystifying ways until the final chapter when everything is wrapped up in yet another most unexpected manner.