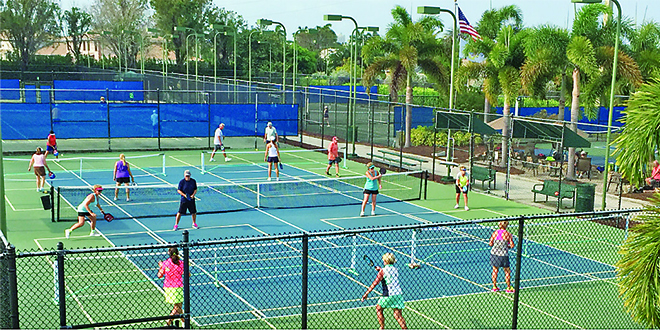 After reading my fellow Coastal Breeze News contributing columnist Todd Elliott’s recent columns, titled “Golf Etiquette” and “What Makes Golfers Compatible?” it got me thinking about proper etiquette and players being compatible, in tennis and pickleball.

Golf and tennis are traditionally very old school, proper games. However, these two sports are experiencing a transition, on both the professional and recreational level.

While I am a huge fan of the traditions which are still held at events like Wimbledon, with its all-white attire by the players and how the ladies wear proper dresses and the gentlemen wear a suit and tie; or at The Masters, where the caddies wear the traditional white overalls, and of course, the passing of the green jacket to the champion at Butler Cabin.

But, times and trends are changing! I feel we are all looking for a more casual, less time-consuming approach to everything we do. Heck, here in Florida wearing khaki shorts, a Tommie Bahama shirt and topsiders is considered dressed up!

For example, nowadays at most professional tennis tournaments, the doubles matches are played in a modified scoring system. The matches are two out of three sets, using no-ad scoring, and the third set, is often played as a 10-point tiebreaker! And, they are now also scheduling the doubles matches before the singles matches. The whole concept of this format is to make the game more entertaining and presentable to the fans.

The NFL is discussing changing the time clock in between plays and eliminating the stopping of the clock on out of bounds plays, except for in the last two minutes of the game. They are also considering changing the time frame of commercials. All to speed up the game and make it more user-friendly for the fans.

This now brings me to the sport of pickleball.

I personally feel that one of the things that makes pickleball such a fun and popular sport to play is the fact that you are constantly changing courts, playing with a new partner and competing against different opponents.

In addition to the variety of play associated with the sport of pickleball, the difference in golf and tennis is that, traditionally, they have always been sports where you are supposed to remain quiet during play.

However, in pickleball, you frequently hear players talking, laughing and screaming in celebration during the points! This all kind of lightens up the whole game.

With that said, I still believe we need to apply proper manners and good sportsmanship in any activity we participate in that involves competition.

One of the issues involved with all sports is making sure that equal level players are competing against one another. I feel there is an etiquette that should be followed in regards to making sure that everyone (win or lose), especially in recreational competition, is having fun.

Golfers utilize a handicap system to balance scores between beginner, intermediate and advanced level players. They also have different locations for the tee boxes for men, women, seniors and professionals. This allows different levels of golfers to be able to comfortably play a round of golf together.

As a casual/recreational golfer, when I play with golfers who are better players than I am (which is most of the time I play) I appreciate that the players who are more experienced than I am take the time to advise me on what club to choose and what kind of shot I should try to hit.

As tennis and pickleball players, if we are the more advanced player in a group, and if we have a less experienced/beginner player who is playing up with our group, I feel it is our responsibility (if we are really that good of a player) to be able to have the patience and courtesy to play on a different level and control our shots, in an attempt to make the game competitive and fun for the lower level player.

As I stated in my previous article, “Tournament Tough,” the reason it is called recreational play, is because it is supposed to be recreational!

Even though the sport of pickleball has been around for some fifty years, it is virtually a new sport for all of us.

I feel that no matter what level of pickleball player we have become, we need to remember back to when we were just discovering the game, and as I said before, (if we are really that good of a player), have the patience and courtesy to play on a different level and control our shots to make the game competitive and fun for the lower level player.

As an instructor and coach, I feel it is the responsibility of the staff at the facility at which you are playing to do everything possible to keep beginner, intermediate and advanced level players competing at different time schedules. However, the simple fact remains that most lower level players often want to play up to improve their game. It is a scenario that presents itself in all sports.

I feel it is up to all players to comprehend and be aware of their abilities.

Lower level players, while challenging themselves to improve need to know where to draw the line, in regards to trying to compete on a level which is beyond their shot making abilities.

Higher level players need to have the patience and courtesy to allow new players of a lower level, (who can hold their own), to feed into the more advanced level of competition.

So whatever level competitor you may be, a beginner, intermediate or a championship player, you should always maintain an attitude of respect for other players, and remember, no matter how good you may (think) you are, there is always somebody out there that is better than you.

Be a good sport, be a good winner, be a good loser and always take away something positive from any win or loss.

Wayne Clark is a certified professional tennis instructor with over 25 years experience coaching players on all levels of the game. Wayne is also qualified in pickleball instruction. He has been the head instructor at the Marco Island Racquet Center since 2001. The Racquet Center offers clinics, private and group lessons for both tennis and pickleball. Coach Wayne’s Island Kids Tennis juniors program runs year round with classes for players from kindergarten through high school. Contact Coach Wayne by email at coachwayneclark@aol.com, by phone or text at 239-450-6161.

Learn to TurnA Question of BalanceDo Not Enter