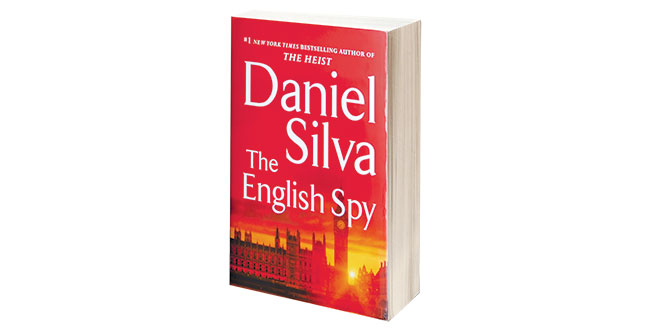 “No more tears now; I will think upon revenge.” – Mary, Queen of Scots

The above quotation from the epigraph page of The English Spy states exactly what this book is – the story of a manhunt. The fourth in a series about Israeli spy and assassin Gabriel Allon who sometimes dabbles in art restoration as a sideline, this book is bound to please any lover of thrillers and spy stories. You do not need to have read any of the previous Allon novels to savor this latest installment from Daniel Silva.

His description of the murder by bomb of a Diana-like former English princess entices the reader into the story immediately. A rapid pace is established from the first few paragraphs, and it does not let up until the final pages when Allon slips back into domestic life for a respite before the resolution.

Silva treks his characters to multiple locations including Corsica, London, Northern Ireland, Germany, and Jerusalem. The author’s portrayals of many of these regions are strikingly realistic because he himself has visited or lived in some of them at one time. The Northern Ireland car bombing described in the book actually happened the year Silva visited Omagh, where he witnessed the aftermath of a different 500-lb car bomb.

Although Allon and his “associates” know from the beginning who is responsible for the murder of the former English princess, their pursuit of him is not linear. The murderer has many disguises and many connections in the international spy/security community. Catching and killing him will require literally every trick in the book, and then some.

Like any thriller worthy of the name, The English Spy goes at a clip, the story line is serpentine with plot twists and turns paced to keep the reader enthralled. My advice is do not try to figure out what will happen next. After guessing at Colin Hernandez’s true identity, I just sat back and enjoyed the ride.

My rating for this book is 4.0/5.0 because I found the writing to be somewhat uneven. Some sections of the book were literary quality while others were not. However, lovers of thrillers and/or a plain old good story will be delighted with Gabriel Allon’s most recent adventure. This is excellent story telling. Available just about everywhere including our local library and other Collier County public libraries.