The End Of Your Life Book Club 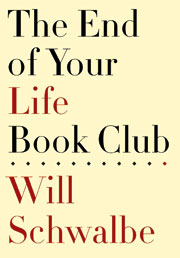 The End Of Your Life Book Club by Will Schwalbe is not morbid or maudlin. It is a celebration of life. Do not be deterred by the title or you will miss one fantastic book as well as the opportunity to meet one of the kindest and most generous people who ever lived. And boy, did she live!

The book club consists of the author and his mother, Mary Anne Schwalbe. It is formed when Will accompanies his mother to Memorial Sloan-Kettering Cancer Center for treatment of her suspected hepatitis, and asks her the simple ice-breaker, “What are you reading?” Basically, his mother guilts the too-busy-to-read-much Will (who is a book editor at a publishing company) into reading Crossing to Safety by Wallace Stegner. A novel about two couples in a long-term friendship, one of the female characters has terminal cancer – an ominous choice for this mother-son book club because at this time, Mary Anne’s cancer had not yet to be diagnosed.

There is so much to admire about this book, it is hard to cull the elements that might entice you to read it. There is Mary Anne Goldsmith Schwalbe herself, a woman who spent her youth seeking adventure and travel, pursuing an acting career, falling deeply in love with a “confirmed bachelor” (she didn’t know) and through him meeting her future husband and father of their three children. After her marriage she worked as an educator at the high school and college levels, managed admissions at Harvard and Radcliffe, served on the boards of many foundations, and still managed to be room mother and bake cookies for her three kids.

She took a sabbatical from her job and went to work in a refugee camp in Thailand, accompanied by her only daughter Nina who was one semester away from college graduation. The experience profoundly changed both women. Nina went into public health and Mary Ann eventually worked full time in refugee causes, helping found the Women’s Refugee Commission, and working with the International Red Cross. She did not just sit behind a desk in NYC while serving these causes – she traveled the world many times, including multiple trips to Pakistan and Afghanistan, lived in the dire camp conditions and was even shot at.

There is Mary Anne the mother who as a woman of deep religious convictions insisted that her children attend church regularly. Her generosity and tolerance for diversity extended even to her children, as she allowed young Will to choose Christian Science as his religion, which he did because it required the least effort on his part. The matter of religion and belief system is revisited in their book club.

There is also the Mary Anne who even in the midst of her terminal cancer diagnosis is acutely aware of how “lucky” she is to be able to afford the treatment for her condition, lucky that she is not alone in her fight and has family and friends around, lucky that she lives in NYC where the best treatments are located, lucky that she loves reading because when all else fails, she will have that. This woman knew the names and life situations of all her caregivers at Sloan-Kettering and never failed to ask her oncologist at every visit how she, the oncologist, was doing. A woman of more than comfortable means, she took the bus home after her treatments.

In addition to Mary Anne’s well-lived life, there is the story of the Schwalbe family, an incredibly loving and supportive unit whose devotion to their remarkable matriarch almost equals her love for them.

Of course this book is written against the backdrop of Mary Anne’s illness. The symptoms, diagnosis, treatment, and other aspects of modern medicine are familiar to most of us who have experienced this either in our own lives or through that of a loved one. Will describes them accurately and objectively, I think, but they do not take over the story. It is clear throughout this entire wonderful book that Mary Ann has cancer, it does not have her.

Finally, there are two things I found striking about this book, other than Mary Anne herself. The first was seeing Will come to recognize this woman as Mary Anne, not just “mom,” to the point where he can say near the end, “I’m proud of you.” The second is the mega booklist that comes as a bonus. All the books that the Schwalbes read and authors they discussed are in an alphabetical appendix. It will keep you in reading material for years to come.

Maggie Gust is a life-long avid reader whose career path has included working as a teacher and in various positions in the health care field. A native of Illinois, she has lived in Florida since 1993 and presently works from her home here on Marco Island.