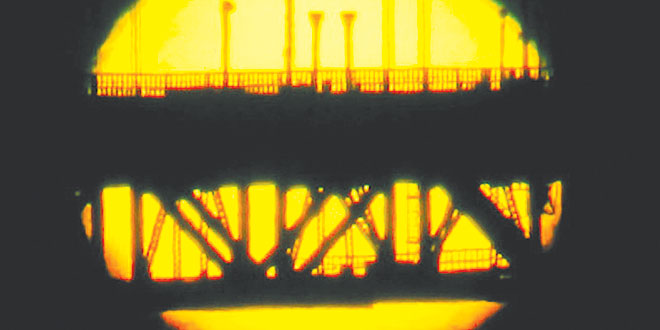 The Sun photographed behind the Golden Gate bridge. Notice the red rim on the bottom and a green rim on top. SUBMITTED PHOTO

Have you ever seen a green flash? A green flash will sometimes happen at the moment of sunset; it usually requires an unobstructed horizon like the Gulf of Mexico. Essentially, they are a mirage effect that happens under certain atmospheric conditions.

Light from the Sun is refracted (bent) as it passes through the atmosphere. Blue light is refracted more than green light, and red light is refracted the least. In addition, blue light is heavily scattered by the atmosphere, which is why the sky is blue. Essentially, this refraction gives us three images of the Sun (red, green and blue) that are almost, but not quite, on top of each other. With a slight magnification, we can observe the Sun with a thin green upper limb and a red lower limb. DON’T TRY THIS YOURSELF! The blue limb is usually scattered away.

A dramatic ray of green light is very rare; generally, one gets a small green glow. A green flash is best seen when your eye is above the inversion level — airline pilots see green flashes frequently — but even just a little altitude helps. This explains why people on the beach rarely see a green flash; it’s not the best spot! Instead, raise your eye up higher above the water by getting off the beach. All the green flashes I have seen were from the beach parking lot. Even better would be a view from a beachfront condo.

Halloween is coming! If you have a small telescope set it up outside on the sidewalk and give the trick-or-treaters a different kind a treat, a view of the fine first quarter Moon we have on October 31. For many, it will be the most memorable event of the evening. It will collect quite a crowd too; Sometimes, I have had as many as 100 children (plus their parents) stop by for a visit over the course of a couple of hours. They won’t forget about the candy, though, so have plenty on hand!