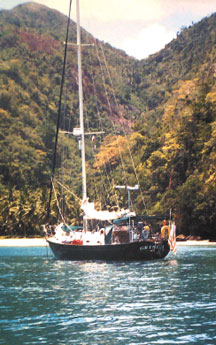 As much as we wanted to explore more of the Dominican Republic, it was time to move on from the DR and make our way to Puerto Rico. Every morning the trade winds pipe up between 8AM and10AM and subside in the evening from the effects of the land. While in Luperon, the winds blew harder than usual in the harbor with 18-24 knot winds in the harbor for over a week.

Finally, the Offshore Weather Report and our weather fax began to show a downward trend and we decided to make our move and sail directly to Boqueron, Puerto Rico, about a 48 hour sail to windward around the capes that we must pass along the northern Dominican Republic coast through the “dreaded” Mona Passage to get to Puerto Rico.

At first we had a rather pleasant sail tacking our way up the coast. We flew our staysail as we can sail closer to windward in these conditions rather than our big genny. By afternoon we were off Cape Maricos with wind and sea continuing to build and becoming diffused. This is caused by all the water and wind coming undisturbed directly from Africa and crashing head on to these huge capes in order to wash around them. This made for a very uncomfortable ride. We slugged it out hoping by nightfall the conditions would moderate. One cape down, three more to go.

We pressed onward. By night we had to round Cape Frances Viejo. There was a bit of a moderating trend with wind about 18k-19 and smaller seas. We could motorsail now. We could just not make any headway with a big head sea. You take one step forward and are pushed two steps back. This is affectionately known as “The Caribbean Two Step.”

We were doing okay now as night wore on. Once past Cape Frances, we had a quiet time crossing a bay whose name escapes me now. It may have been Escondido Bay. Any way, we 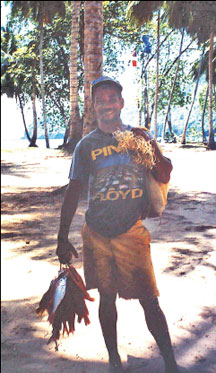 were both very tired from a very busy sail, so my husband went below to rest for a few minutes. He slept for two hours. I didn’t sleep at all as I was at the wheel.

Once you are knowledgeable about your instruments and learn to trust them, being the helmsman is not difficult. Soon after the radar was activated, two squalls popped up as green blobs. I woke him up and we were both now making course changes as we watched the radar looking for information about which way to steer to avoid the storm. This works most of the time. However, there are times when a squall is moving too fast for a sailboat to get out of its way.

We continued on to make weigh before daybreak. We finally reached Escondido, a fjord like bay between magnificent mountains. We were tired and decided to pull into Escondido, aka El Valle, which is still a part of Dominican Republic. We had enough for 24 hours. A lay day and some exploring were in order. First we had to get permission from the Comandante as this is not a port of entry and we had officially cleared out of the Dominican Republic bound for Puerto Rico.

The view inside the bay was unlike anything we’ve ever seen. Huge lush mountains, caves with fresh water falling and a crescent shaped beach ringed by a stand of palm trees. Brightly painted dugout canoes rested on the shore. We saw no one, but I knew that somewhere there were many eyes watching us. I expected to hear the beating of some jungle tom-toms. If a cauldron with a fire under it was lit, we were out of there. Pronto! There was no way we wanted to be somebody’s dinner!

We were here alone. Don and Marge on HOBO had not yet arrived. Soon the expected boarding party of three arrived with the Comandante in uniform wearing a sidearm and his assistant wearing an official 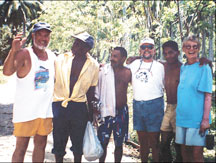 Herman with our friends Marge and Don with DR Officials.

M of G shirt and an oarsman. By now I mastered a few useful expressions such as “Habla mas depacio” and “Muy bonita.” After proper introductions and a quick look at our papers, the men sat down and made themselves quite comfortable.

We knew that the Comandante wanted a gift. We offered him a bottle of rum. He rejected that! He wanted American whiskey. We had none. Instead they accepted Heineken beer, Granny Smith apples, a package of chocolate covered cookies, some Snack-well fat free fruit pies and a new baseball cap we won in George Town at the Heineken booth.

They just did not want to leave. Finally I said, “No siesta since Luperon.” They got the message and left.

After a good night’s sleep, we went ashore. The Comandante wanted to speak to the woman that spoke Spanish. Ha, that was me! The DR men in general like American women, not because I spoke a few words in Spanish, it was because American women possess the “3 B’s”: blond hair, big boobs, blue passport. Lucky me I had all three!

The Comandante presented us with some freshly picked mangos which we had to eat right away lest we insult him. We also walked along the dirt roads of the village as he proudly told us about his home and country. The only way that I can accurately describe it is: remote, rural, and primitive. A place where time stood still. We were no longer in the Twentieth Century.

One man walked by holding his catch of the day, a bunch of fish caught on homemade hooks and a stick for a pole. He then went to the side of a stream, crouched down on his haunches and began to clean the fish. He looked to me just as the Taino Indians would have looked when Columbus arrived. What an experience!