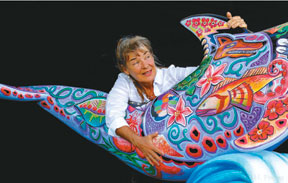 Denise Santos and the new Pierre

Where have all the dolphins gone? Ten years ago, the Marco Island YMCA and The Art League of Marco Island introduced 36 dolphin sculptures displayed throughout the city which were designed by local artists. The “Dolphin Debut,” as it was dubbed, raised $123,000 for the two organizations through an auction held on April 13, 2003. Ten years later, a number are still visible around the island, but many have barely been seen since. Artist Denise Santos is searching for those dolphins, hoping to perform a “Dolphin Redux” on those in need of a touch up or, in what is now needed in many cases, a complete makeover.

Known for her professional sign work around Marco Island and Goodland, Santos has already completed one dolphin and has a second in her possession. Commissioned by Bill and Catherine Cook of Marco Island to “redux” the dolphin that sits in her front yard, Santos created a stunning new piece of art.

The Cook’s dolphin was originally named “Pierre” by Geoffrey Stephenson, a ten-year old Tommie Barfield student who painted the sculpture. Pierre “wore” a beret and scarf of brightly painted squares. The 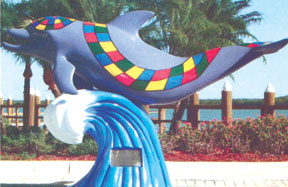 hot summer sun eventually faded Pierre’s colors and he was painted with a plain grey primer. This is the condition in which he first came to Santos. Garnering inspiration from a dolphin-shaped puzzle provided by Catherine Cook, Santos recreated it using an oil-based outdoor paint. Ernie’s Automotive provided a professional clear coat and “Pierre” now sits proudly back in front of the Cook’s home.

Acquiring the second dolphin wasn’t quite as simple for Santos. This one she had to seek out on her own.

“All Purpose Porpoise” was created by Chris Lombardo of Woodward, Pires and Lombardo, P.A. The sculpture was made to look like a Swiss Army Knife, outfitted with a knife, corkscrew, scissors and more adorned along its back. “All Purpose Porpoise” sat in front of Marco Island Office Supply on Bald Eagle Drive for many years after the company purchased it through the auction initiative. “It was artwork for the island,” explained Phillip Penzo, owner of Marco Island Office Supply since 1981. “We purchased it to support the community but over the years it fell apart.” 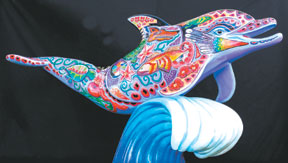 Storms and vandals robbed the dolphin of its Swiss Army Knife fittings and the fiberglass frame was badly damaged.

Santos saw this as an opportunity for a “redux” and sought ought Penzo. “I told him I wanted it. I said, you have four choices. You can give it to me, sell it to me for very little, pay me to fix it or pay the dump to take it away. And he said I could have it.”

Armed with a photo of her “Pierre redux” for porpoise persuasion purposes, Penzo was glad to give her his dolphin, stating that her work was beautiful. Ironically, Marco Island Office Supply was also the sponsor for “Pierre” in 2003.

Santos is currently repairing “All Purpose Porpoise’s” frame damage and hopes to find a commission and a new home for the sculpture. She hopes to find and “redux” as many of the “Dolphin Debut” sculptures as possible. Santos urges those who know of a porpoise in need of a face lift to come forward and contact her at 239-450-0824 or at premieregraphicdesigns@gmail.com

To learn more about Denise Santos and her 40 years of professional art experience, visit her website, www.signsanddesignsbydenise.com