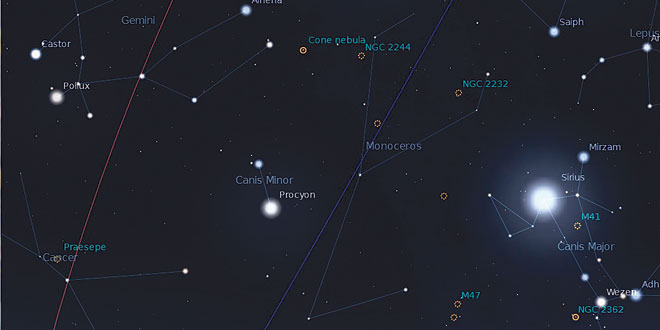 Stargazers can look at this section of the sky for hours. Monoceros, the unicorn in the center, is not much to look at of course, but the Milky Way does run through it and there are some fine clusters awaiting inspection by binocular users. In particular, try to find M47 near the border with Canis Major.

Sirius the Dog star is the brightest star in the sky, only the Moon and several planets are brighter. Not that anyone ever needs help finding it, but the belt stars in Orion point right towards Sirius. Strangely, in absolute brightness terms, Sirius is the dimmest naked eye star in Canis Major. The other stars in Canis Major, the big dog, are huge bright suns, perhaps a hundred times brighter than Sirius, but are hundreds of light years off and the distance dims their splendor. Sirius is one of the Sun’s close neighbors in space, only 8.6 light years away.

During the summer Sirius shares the sky with the Sun; the ancients believed (wrongly) that the heat of Sirius added to heat provided by the Sun made the season so hot. Even 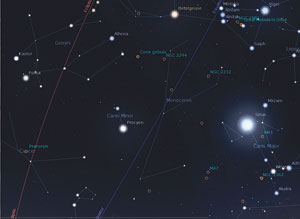 today we refer to the Dog Days of Summer.

While looking at Canis Major, use your binoculars to locate M41, a star cluster, which hangs like a dog tag on the constellation. In dark sky areas like those near Copeland, M41 is visible to the naked eye and has the possible distinction of being the dimmest object ever described in ancient text.

Another close neighbor of the Sun is Procyon, the brightest star in Canis Minor, the little dog; at 11.4 light years it is only slightly farther away than Sirius. Canis Minor is perhaps the easiest constellation of all to memorize – it contains only two stars!

Not far from Canis Minor lies the constellation Gemini, the twins, with two almost equally bright stars, Castor and Pollux. For those that have trouble distinguishing which star is which, Castor lies just slightly closer to the Pole star than Pollux. Binocular users should try to pick out the Cone Nebula near the foot of Gemini, it’s a fairly bright cluster with some associated nebulosity.