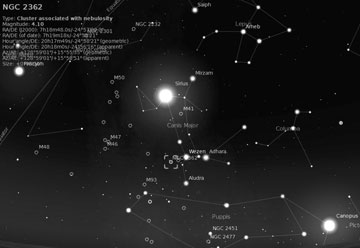 Sirius has been known as the “Dog Star” for many centuries, presumably because it is the brightest star in Canis Major, the big dog – indeed Sirius is by far the brightest star in the night sky. Long ago it was thought (wrongly) that in the summertime when the Sun and Sirius were in the sky simultaneously, the extra heat Sirius provided caused the season to be hot. Thus the old phrase the “dog days of summer” was born!

Sirius is a good example of a star that is bright because it is close to us, only 8.6 light years away. If three other stars in the hind end of Canis Major, Aludra, Adhara or Wezen modestly bright stars on their own, were the same distance away from us as Sirius they would be bright enough to cast shadows. Indeed, Aludra would challenge the Moon as ruler of the night for most of the month.

Also in Canis Major is the cluster M41, probably the faintest object visible to the naked eye that was described in ancient times. You can see it, also, if you are in the dark skies near Copeland on state road 29; otherwise it is an easy binocular object that shines like a tiny tag hanging from the dog’s neck.

Near Canis Major is the rather nondescript constellation of Monoceros, the unicorn. Although the constellation has no bright stars in it, the Milky Way does run through it and so there are a fair number of binocular targets available. The brightest are M47 and M46, the former being rather brighter. They are rather difficult to locate as there are no bright stars nearby to use as a guide, but if you find one it’s easy to find the other as they are so close to one another – possibly even in the same field of view. Scan the whole area slowly with your binoculars and your patience will be rewarded with the discovery of several other clusters.

The area of rich clusters continues in the far southern constellation of Puppis, but you need to wait a couple of hours for the clusters to rise a little higher in the sky; alternatively you can wait a few weeks. Don’t neglect the area to the left of Wezen, there are two modestly bright clusters waiting there, one brighter than M47.