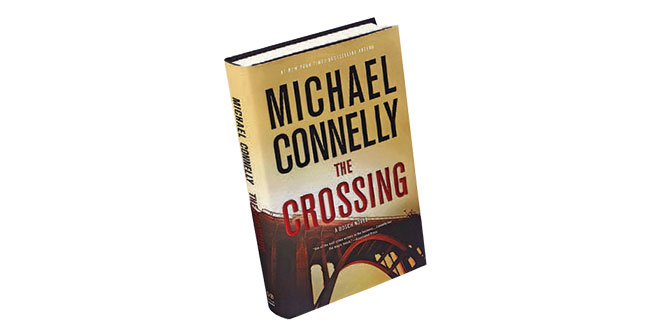 In his 20th Harry Bosch novel, Michael Connelly reunites Harry with his half-brother Mickey Haller, the defense attorney from “Lincoln Lawyer.” Connelly first matched them up in “The Brass Verdict” (2008). But make no mistake, this is Harry Bosch’s story.

Maddie, Harry’s daughter, is now 18 years old, within days of high school graduation and already has plans to attend Chapman College, the same school that Mickey’s daughter will be attending. The girls will room together. If you have followed Harry’s story through the years, you know that Maddie has not had it easy, and her friendship with Mickey’s daughter seems to be a sign of emotional good health. Likely, it is also a set-up for one or more future Haller and Bosch novels, where the girls encounter murder on campus or domestic terrorism, and the dads come to the rescue. Connelly stays current with the backdrop of his stories.

In “The Crossing,” Harry is now retired from the LAPD and suing the department for forcing him into early retirement. When Mickey’s PI, Cisco, is sidelined with an injury after his Harley-Davidson is deliberately sideswiped by a burnt orange Camaro, Mickey asks Harry to step in for Cisco. He needs his help on a case involving a young black male artist with a wife and two sons who was arrested for the brutal beating death of the wife of a sheriff’s deputy. Haller is sure Da’Quan Foster is innocent of the murder of Lexi Parks, killed in her own bed. Harry turns him down, reluctant to commit to the crossing from cop to PI for the defense, thereby spitting in the eye of every law enforcement officer in LA and the county, and earning their eternal hatred.

He goes home to rebuild the 1950 Harley gathering rust in his garage, a project that will occupy his attention for quite some time. With the carburetor dismantled, all the parts cleaned and drying on newspaper, John Handy’s sax playing on the stereo, Harry studies the Clymer manual detailing step-by-step restoration of his vintage Harley. While reaching for a part, Harry realizes the newspaper was one he intended as a keepsake. It showed the former governor with one of his pals, a state assemblyman whose son’s prison term for murder was reduced to seven years by the governor on his last day in office. Harry liked to look it occasionally to remind himself of the strange bedfellows of politics and justice. After some internet research of Lexi’s murder, Harry agrees to read Haller’s case file on Foster, then to be Cisco’s temporary replacement.

It is joy for any mystery lover or police drama lover to read a Connelly novel. He is one of, if not the best at making police procedure exciting to read. Bosch’s mind is a well-oiled machine and he is tireless in following every loose thread and fitting it into the whole story. He revisits crime scenes, re-interviews witnesses, and immerses himself in the feel of those places, using not only his instincts but also his very disciplined mind.

Mercifully, Connelly reviews all the pertinent data Bosch gathers by having him compose a timeline of all the known and unknown events, loose threads, and things that do not “fit.” He brings the clues altogether for the reader, to organize the story before the climax. There are a lot of characters and a lot of events in this fast-moving story.

The term “the crossing” has at least two meanings, as illustrated in the following passage:

“Bosch walked back to his car. He had gathered no reliable information inside the jewelry store but felt he had rattled a cage and gathered something possibly more important. Suspicion. He felt he was getting closer to the crossing, the place where Lexi Parks had tripped a wire that resulted in her death. He sat behind the wheel without turning the ignition and thought about next moves…For the first time he realized how free he was to follow his instincts and cast his net in whatever direction he wanted. With the department he had certainly employed his instincts. But there was always a lieutenant and sometimes a captain to be briefed and an approval needed…Bosch didn’t carry those burdens now and for the first time he understood and felt the change.”

Bosch’s dogged investigation coupled with Mickey Haller’s formidable lawyering make “The Crossing” a splendid read for any mystery or suspense fan. This is another home run from Michael Connelly. Harry Bosch, PI – can’t wait for the next one.

Rating: 4.5/5.0. Available just about everywhere in all formats.