The Contradiction in My Yard 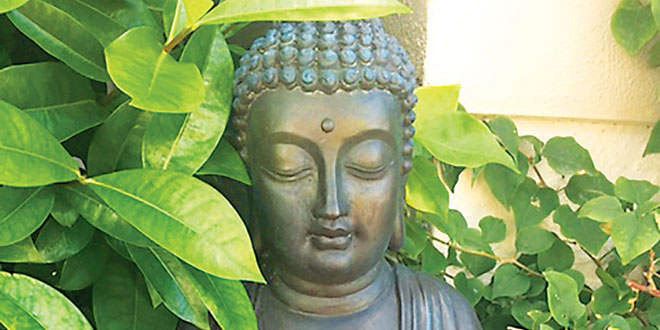 I’m not sure when I heard a quote from Buddha for the first time, but for as long as I can remember, the image of Buddha has been associated with peace in my mind. This association gained solidity when I did my 200-hour yoga teacher training. Of course, the ancient sage, Gautama Buddha was not the only person to promote peaceful living and encourage an end to suffering. Contemporary world leaders like Nelson Mandela, Mahatma Gandhi, Mother Teresa and Martin Luther King also led the march toward unity and coexistence. But the words of Buddha stick with me, and when I see the various interpretations of his image, I spontaneously smile and release a calming breath. So, a couple of years ago, I asked my husband if he would mind if I got a small statue of Buddha to place in our yard. With a shrug, he said “fine,” and I brought my plaster, Peace Master home.

A couple of months ago, a package arrived at the post office addressed to my husband. It was pretty big, and flat, and square-ish. He was really excited when he saw the box, still wrapped in its packing material, waiting for him to open. “I’m not sure what you’re going to think of this,” he said as he tore it open. But I figured, anything that made him that happy had to be good for both of us. And since it wasn’t shaped like a 5-wood, or a new 9-iron, I was pretty curious about what could get him this animated. It turns out it was a cardboard sign. Mostly blue in color, with a little traditional red and white accent, promoting a presidential candidate. The name on the sign rhymes with “Rump.”

Our “Rump” placard is plugged into the grass, prominently between two royal palms in the front yard. For me, it is a daily reminder of a couple of things:

And it wouldn’t matter if the sign out front rhymed with “Distillery.” Because both “Rump” and “Distillery” are words that have a rather unpleasant connotation to me. Neither speak of peace or an end to suffering. Take Rump for instance. It’s the backside of an animal. And it generally holds a disproportionate share of attention from those who like rumps. And anything that escapes from a rump is more than likely unpleasant to the senses. 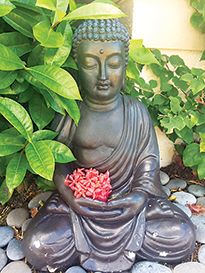 Photo by Laurie Kasperbauer“Peace comes from within. Do not seek it without.” ~ Buddha

on the other hand, could be equally offensive. Near my hometown in Iowa there’s a tiny town with a big, decades-old reputation for bootleg whisky. People from all over paid big bucks to a guy, who knew a guy, who knew the guy who could get you a pint of the illegal brew. Until a guy came forward with the recipe and started selling it “legit.” Then it turned out the “legit” Templeton Rye was really just a generic version of the same old whisky you’ve been able to buy off the shelf at the liquor store for the last eight years.

So, my dilemma continues. I can choose Rump. It’s generally offensive and emits unpleasantness a couple times every day. However, Rump is located at the base of the backbone and it does hold up its end of the body as a whole. And while Rump might shake us to the core, perhaps something new and dynamic will emerge from Rump.

Distillery, on the other hand, uses the same ingredients that have been thrown together since the days of bootlegging. The equipment might have changed but we are still left with a product that tastes bitter on the tongue and leaves us dull and glassy-eyed. But I might be inclined to choose Distillery. After all, I know I can sustain on a nip of fermented familiarity, and what Distillery produces is comfortable.

Sigh. As inclined as I am to not vote at all this fall, I realize that no matter which box I check, I will feel better than if I don’t check a box at all. So I sent away for a “mail-in” ballot. And I will exercise my constitutional right to vote in the comfort of my home. Maybe I’ll sit next to my friend Buddha in the front yard and hope for a bit of inspiration from my peaceful décor. The good news is that after November 8th the cardboard support of “Rump” will be pulled from the yard, but Buddha will remain. And no matter if it’s Rump or Distillery who leads the country for the next four years, I’ll have peace in my yard.