The Clemmons family takes a holiday 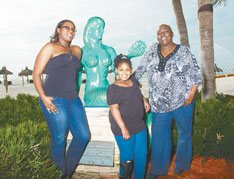 The Marco Island Marriott Resort hosted a very special lady and her two daughters for a long week-end of relaxation and star treatment from January 12- 15. Their names will not be found on a list of celebrities, or among a roster of CEO’s from Fortune 500 companies. However, Chiquita Clemmons and her daughters, Lateria and Kayci, were certainly treated like stars and received celebrity service at Marco Island’s beautiful Marriott Resort.

Chiquita and her family live near Atlanta, Georgia in the small town of Lithia Springs. Chiquita has been battling fourth stage colon cancer for more than two years. She had worsening symptoms for some time before she was able to consult a physician about her health.

Her 8 year old daughter, Kayci, was suffering from a rare disorder, Rasmussen’s Syndrome, which caused relentless seizures not controlled by medication. Surgery was performed to remove the left frontal and temporal lobes of Kayci’s brain.

The seizures stopped but the drastic nature of the surgery left impairments to her right arm and hand, loss of peripheral vision and developmental delays. Kayci requires a number of ongoing interventions including physical, speech, occupational and vision therapies.

Chiquita’s husband was unable to handle his daughter’s illness and prolonged recovery and left the family. Lateria, away at college, returned home and filled the challenging role of standing by and sustaining her mother and sister throughout the crisis.

In December, 2009, Chiquita finally sought help for her own health concerns. Tests revealed a tumor in the colon confirmed by more extensive tests. Lateria, then 21 and a senior in college, accompanied her mother to her first appointments and was hopeful that a solution would be found. Chiquita’s best friend took her to meet with the oncologist on December 22 while Lateria and Kayci shopped for a card and flowers for their mother in anticipation of a promising outcome.

The oncologist’s diagnosis was fourth stage colon cancer and his advice to Chiquita was to put her affairs in order. Chiquita declined and asked for aggressive treatment. She had two beautiful daughters to live for and was determined to remain in their lives as long as possible.

The family celebrated Christmas more quietly than usual. Lateria commented. “At first my mother’s illness was very difficult for me to process. My little sister still needed a lot of care and had to get to many therapy sessions. I did not return to school putting it beside me until decisions were made about my mother.”

Chemotherapy started as soon as the holidays were over. On January 4, 2010, Chiquita received a port and on January 6, she began chemotherapy treatments. She continues weekly treatments to this day.

Chiquita worked for The Westminster School, a job she loved but, because of the effects of chemotherapy, eventually she had to resign. Westminster, a private, Christian school, helped Chiquita navigate the unfamiliar world of entitlement programs and has maintained the family on their health care plan until they are eligible for a federal program. The family commented on the wonderful support they have received from both the school and Chiquita’s co-workers.

The family belongs to Destiny World Church and Chiquita’s deep faith and acceptance of her illness is humbling. There is no “why me” in her vocabulary, just “yes, Lord, I accept your will.” She remains independent but was so grateful in November, when a group from their church community moved the family “in an hour’s time!”

Before the Christmas holidays her oncologist asked her if there was a special wish or dream she had. Chiquita responded. “I would like to see the beach and show it to my daughters.” Her doctor sent a request to Jack & Jill Late Stage Cancer Foundation and Chiquita’s wish was granted.

The family was met at the airport and whisked to Marco Island. Chiquita and her daughters were welcomed by Susan Ryziw and Cathy Nelson, Executive Assistants to the General Manager of the Marco Island Marriott and escorted to a spacious suite where they discovered a welcome basket overflowing with amenities and gifts. They enjoyed sumptuous breakfasts at the Tropiks Café where Miss Judy saw to their every comfort. She was observed taking Kayci back to the buffet table to fill a generous tote bag with treats for snacking! All other meals were provided in the Marriott restaurants.

Jewelry by Laura at the Marriott provided certificates for the family to select lovely jewelry to remember their stay. On Friday evening, the Marriott arranged a chauffeur to take the ladies about the island to do some shopping for friends and family. Chiquita only wanted a gift for her oncologist who set the plan in motion that brought her family to Marco Island.

The highlight of their stay, of course, was the beautiful beach and the Gulf of Mexico. The cool temperatures caused high waves and the Gulf did not disappoint. Chiquita and Lateria commented on the courtesy and attention they received from the Marriott staff. Kayci was treated like a little princess and even wore a tiara for part of her stay!

The family faces the future with amazing faith and courage. Lateria plans to complete her education at Brenau University, Gainesville, Georgia next fall or in 2013. She is interested in broadcasting and mass communication.

Kayci will return to school and her many therapies to help her retrieve and maintain physical and developmental skills wherever possible. She is happy to be free of seizures and is a friendly, charming little girl.

Chiquita views the future with calm dignity. She said. “I have been strengthened by Kayci’s illness. My goal for the future? Just living. Every day is brand new, expect something new to happen and stay strong. Try to act the way you want to feel.”

The Marco Island Marriott was proud to participate in fulfilling Chiquita Clemmons’ wish. Through Spirit to Serve, the Marriott Corporation responds to local and worldwide organizations involved in service to their communities. Jack & Jill Late Stage Cancer Foundation was founded by Jon & Jill Albert and, as its name indicates, helps fulfill dreams for patients who have been diagnosed with late stage cancer. The foundation is located in Atlanta, Georgia.