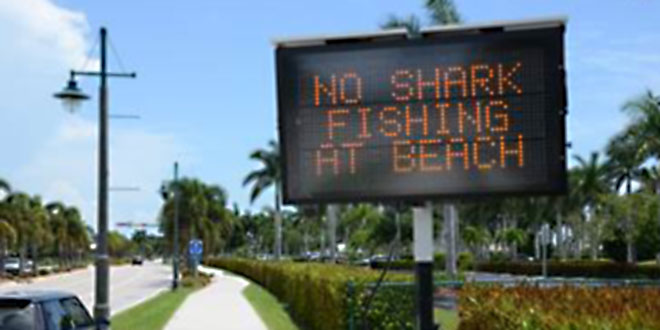 The City of Marco Island’s Beach Ordinance #08-14, under Section 54-36. Regulation of Use and Conduct on the Beach, Item (g) states: It shall be unlawful for any person while on the Beach or within 1,000 feet from shore to fish for sharks or to fish by those methods commonly known as chumming or blood baiting. Nothing herein shall be construed to create a duty of any sort on the part of any law enforcement officer or city employee to prevent fishing or to warn of the presence of sharks in the Gulf of Mexico.

To address the increase in reports of shark fishing along the Marco Island beach at night, the City of Marco Island Police Department have posted a sign to remind beach goers of the beach ordinance and specifically the prohibition of shark fishing on the beaches. Shark species, such as lemon, black tip, nurse, hammerhead and others are very common in the nearshore areas of the Gulf of Mexico waters particularly in the warm summer months when bait fish are plentiful. There has been a trend noted by Florida Fish and Wildlife up and down the Gulf coast of night fishing for sharks using kayaks. Cut bait is put on a large hook; the baited hook is paddled by kayak out past the first sand bar of the beach and let go in hopes to catch large sharks beachside for the “fun” or “thrill”. In past few months, several very large sharks have been found dead on the Marco Island beaches. More than typically seen that could be the result of natural causes. Due to the sharks found and the fisherman seen at night on the beaches, the MIPD has reminded beachgoers of the City Ordinance.