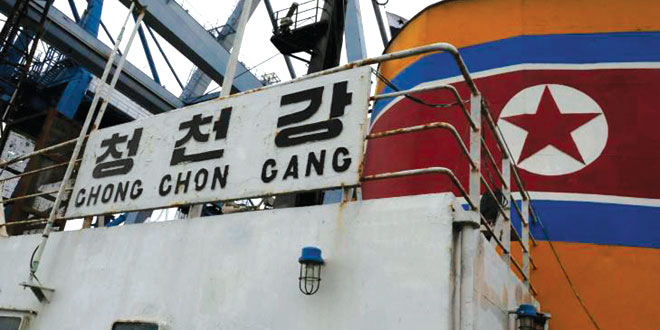 The Chong Chon Gang is a 450 foot, non-descript aging tramp steamer carrying the Democratic Republic of North Korea flag. When it was stopped by Panamanian authorities on the Atlantic side of the Panama Canal last week, it was quite obvious that the cargo manifest she was carrying was as phony as the word “Democratic” in the name of her country of origin. The “Gang” was officially carrying 10,000 tons of Cuban sugar packed in 200,000 white sacks from Cuba to North Korea. She was stopped by swift Panamanian patrol boats who were responding to an allegation of drugs on board this ship which was built in 1977 and was ill prepared to make the long ocean passage. The conditions within the ship were beyond horrible and despicable. The crew quarters were not air conditioned; they were moldy, filthy, smelled of urine and black tobacco and bug infested according to the reports. Her crew of 32 first resisted the take-over by the Panamanian authorities and according to local sources “put up a fight” not to let go of control. However, they were convinced that this was for local consumption back home where families of all seamen in the North Korean fleet are held hostage and could be subjected to torture and worse if

the leadership determines they did not resist. The ship’s captain actually tried to kill himself by slashing his own throat during the take-over and said to have suffered a non-fatal heart attack. The Captain and the crew are now enjoying air-conditioned, clean rooms at the Panamanian base where they are being held.

This was not the first time the “Gang” was in trouble with international authorities. The Stockholm Peace Research Institute reported that she was stopped on suspicion of carrying drugs and ammunition. She was also stopped in Ukraine back in 2010 for unspecified reasons. The “Gang” was attacked by pirates in the Arabian Sea in 2009 and two of her sailors were injured according to the Lloyds List’s vessel report. That year, she had made an unscheduled stop at the Syrian port of Tartus on the Mediterranean coast which is home to the only Russian military naval base outside of Russia. “Gang’s” registered owner is North Korean State run Chongchongang Shipping Co. Ltd. Records indicate that during the last few years she made stops at Kenya, United Arab Emirates, Brazil, Turkey, Iran and Jordanian port of Aqaba.

In short, this vessel has been going around the world for a long time and making stops at some of the world’s most intriguing hot spots. Her last voyage before being stopped in Panama, started on April 12, 2013 when she

departed the Russian port of Vostochnyy. Her whereabouts immediately after departure are not clear. Her crew switched off the ship’s signaling apparatus which notifies the international Automatic Identification System (AIS) that allows global maritime authorities to know the locations of ocean-going vessels. It is widely reported that while it is mandatory for all large vessels to keep the signaling system on at all time; many do not for various reasons and are not prosecuted for lack of prosecutorial authority. “Gang” next appeared on the AIS tracking on May 31 in Balboa, Panama, 7,500 nautical miles away. On June 1, 2013 “Gang” made her passage through the Panama Canal with a stated destination of Havana. As soon as she passed through the Canal however, she disappeared from the tracking system once again. The vessel arrived at the Atlantic Coast entrance to the Panama Canal at the port of Manzanillo on July 11 with a stated destination of North Korea.

The ship was seized by the Panamanian authorities immediately upon arrival and her cargo hold was opened. Under 200,000 sacks of Cuban sugar 4 or 5 shipping containers (40) were discovered which were not on the ship’s official manifest. Upon unloading and opening these containers, Panamanian authorities were surprised to find two anti-aircraft missile systems, nine missiles in parts and spares, two MiG-21 jets and 15 engines for MiG-21’s. There

may be more containers in the other holds of the ship since only one was opened and examined at this writing. It is now indicated that sophisticated equipment is being shipped in from the USA which will allow the authorities to search the entire ship for weapons, drugs and other items not appearing on the official manifest.

In order to complete the story and examine what this means to us here in America, we must also add that another ship from N. Korea, 390 foot Oun Chong Nyon Ho, made a similar trip to Cuba from North Korea last year. International agencies have reported unidentified North Korean flights to Cuba traveling through central African air space earlier this year.

Cuban authorities did not deny the existence of the weapons on the “Gang” indicating these were being sent to N Korea for refurbishing and updating since they were of 1950’s vintage. However, they were not too clear as to why the cargo was not on the manifest and why it was hidden under 200,000 sacks of Cuban sugar with an estimated market value of $ 3.2 million dollars.

This probably is only the tip of a much larger iceberg. North Korea is desperately in need of currency to purchase goods to keep her populations fed; Cuban government is cash-strapped and may be paying for North Korean’s service in sugar. Despite all

efforts by the United Nations, United States and some European allies weapons transfers between rogue regimes take place on a daily basis. Some analysts declared that the weapons found on the “Gang” were obsolete! Don’t believe a word of this. Weapons are weapons and they can always be upgraded to meet today’s needs and may be used in threatening neighbors as well as the rogue state’s own populations. Cuba is only 90 miles south of us and the infamous missile crisis (the most dangerous moment in human history) is only about 50 years old. We should see the “Gang” incident as a warning to all who care that North Korea could be supplying weapons to Cuba!

This is not a far-fetched idea since Russia is no longer interested in upgrading the aging weapons systems and armaments in Cuba coupled with the strained relations between China and North Korea. Despite all the wonderful messages being sent around the world by elite sympathizers of these two last official Communist regimes, they are both falling apart.

They are out of cash and can’t afford new weapons in the case of Cuba and enough food to feed their own population in the case of North Korea. Desperate nations do desperate things. The readers should keep their eyes and ears open to the events taking place in Panama to determine if the “Gang” incident was a “one-off” or “one of many.”