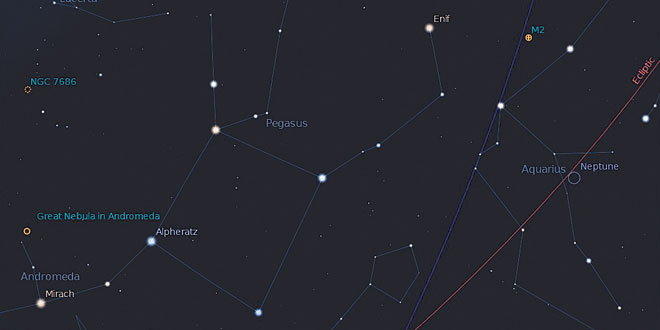 Tonight Pegasus has risen in the east. Pegasus, the winged horse, is really just half of a horse with only his head and forequarters in the sky. The constellation is famous for the great square of four nearly equally bright stars. A note for beginning stargazers, the square is big – around 15 degrees across, your outstretched hand can’t cover it.

The star in Pegasus’ nose is Enif, a fairly unremarkable star that comes with an interesting warning flag for first time telescope buyers. Some years ago a beginner in the hobby purchased a “go to” telescope. This kind of telescope is computerized to go directly to any object in its database – no hunting! But there is a trick to calibrating it which they don’t bother to advertise. The user must, each and every time he uses it, locate three widely separated stars in the sky in less than a minute or two, centering each in the field of view. The trick is the computer selects the stars. The beginner in question was asked to find Enif. He had absolutely no idea where it was which rendered his telescope pretty much useless. He asked me for help, I had heard the name before but I had no idea of the location either as the name was rather obscure. If the computer had called it Eta Pegasi, (that is standard nomenclature) I could have found it on a chart I had, but that was not an option the computer offered.The telescope remained unused all night.

While you are looking at Pegasus check out M15 with your binoculars. M15 is a modestly bright globular cluster at magnitude 6.4 and dead easy to find as Pegasus’ nose is pointing right at it. Also in the area is M2, another globular cluster just a tiny bit fainter than M15, and not much more difficult to find because it is near an imaginary line connecting Enif and another 3rd magnitude star in Aquarius. These two examples are simple illustrations of the technique called “star hopping,” a way to locate otherwise invisible objects.