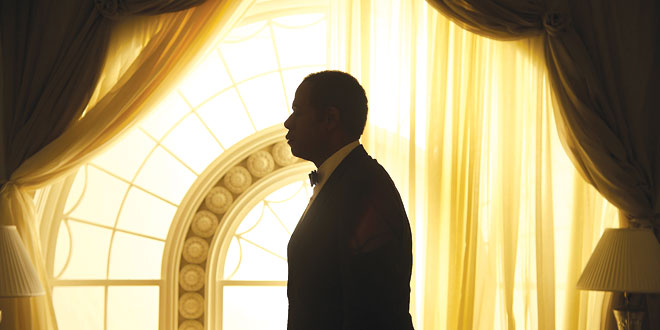 By trying to do too much, “the Butler” ends up doing too little. It intersperses the life of White House butler named Cecil Gaines (modeled on real life butler Eugene Allen) with episodes of the Civil Rights Movement. In a huge cast, including Robin Williams (who is supposed to be Dwight Eisenhower, but looks more like Mr. Truman), Alan Rickman as a very soft toned Ronald Reagan, Liev Schrieber who plays Lyndon Johnson, even down to dictating while on the John, Vanessa Redgrave, Mariah Carey, and others in small roles.

The two characters supplying the thread holding the movie together are Forest Whitaker as the consistently silent butler, serving in the White House for 34 years, and Oprah Winfrey, as his wife Gloria, who boozes away her days and even has a dalliance with a lazy neighbor. Both performances are first rate and sustain the long movie.

There’s a lot of fiction at work. The real butler was not a cotton picker in Georgia. He was born and raised on a plantation in Virginia. Apparently he was not abused as portrayed in the movie, and he did not break into a store. He only had one son, not two as depicted. His only son survived the Vietnam War. There’s more “poetic license” but the cinematic, didactic version serves to trace the events of the Civil Rights Movement by having the fictional son participate in many stages from lunch counter sit-ins, to school integration, to the Black Panther Movement, to the Civil Rights Acts, to Martin Luther King and the riots after his assassination to the election of a black president.

It’s a long road condensed by brief episodes and highlights, including the invitation from Nancy Reagan (Jane Fonda) to Cecil to attend a White House dinner as a guest.

By being so choppy and episodic the movie misses the mark as an epic of the tumultuous times. Forest Whitaker and Oprah Winfrey save it from being nothing more than bits and pieces. They both are splendid.