The Business of Bocce 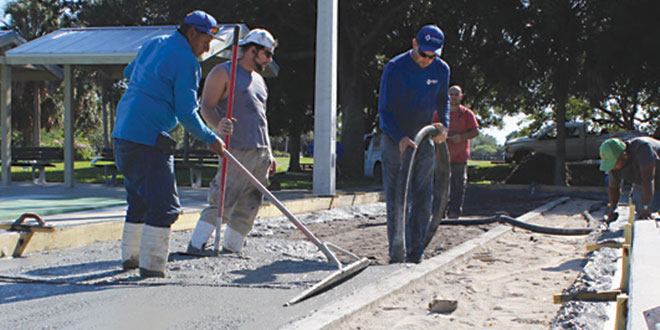 There are many residents and visitors to Marco Island who love the game of bocce. From organizations like the Italian American Society, who host a team, to condominium associations who have their own leagues, to many individuals passionate about the game, there is an ample supply of bocce players. Enough so that it was determined three bocce courts at Mackle Park was not enough. An idea Peter Pareene and his friends firmly believed in.

Pat throws the bocce ball after assessing the court.

Madonia, Lauren DeLisa, Pat Mazzucco and Dale Johnson, decided to approach Mackle Park with the idea of adding a fourth bocce court. They spoke with Alex Galiana, Recreation Administrative and Facilities Manager for the City of Marco Island. The idea was passed by the Parks and Recreation Advisory Committee onto the City Council after the Italian American Society had proven their interest with a financial donation as seed money. That donation, along with their persistent efforts, brought approval from the City Council and the idea to fruition! A

Peter takes aim, showing the ball does not curve.

fourth court has been developed.

“All in all, design, cement, carpet, etc., is expensive. The bid for this court came in at a little over $18,000. We started speaking with others and before long, we had 350 signatures on a petition to put forth to council to build a fourth court. That turned a lot of heads and the court has been built,” said Peter.

to cross the playing fields and had to enter on a side street and back down the pathway. The company prepares the area, builds the framing, pours the cement, uses a laser to level the court and then the grass was put in. The turf is no longer glued, it is held in place with sand.

The three older courts get plenty of use, but they could use repair work, too. “Low spots collect water. It’s obvious when the ball curves this way or that. The ball moves straight 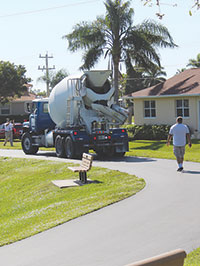 The cement truck was guided, going in reverse, halfway around the lake.

down the new court,” said Peter. “Repairing the old courts should be considered in the near future.”

“The new court was finished just in time, too. We begin league play Monday afternoons on January 11th. We play Friday nights as well,” Peter added. One can sign up for a few time slots or an entire season.

For further information on leagues or to schedule court time, contact Mindy Gordon at Mackle Park at 239-642-0575.