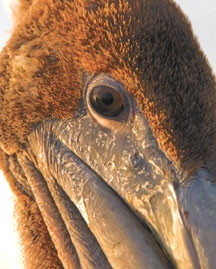 As fellow coastal and island residents, there aren’t many places one can go along the Florida coast without seeing a Brown Pelican (Pelecanus occidentalis). There are seven species of pelicans in the world. Two inhabit North America – the White Pelican and the Brown Pelican. Standing two to four feet tall, with wingspans up to six to seven feet, tip to tip, the Brown Pelicans make their presence known on docks, at marinas and the beach in the Gulf of Mexico from Texas to Florida; along the Atlantic Ocean from Virginia to the mouth of the Amazon River and along the Pacific Ocean coast from central California to south Chile out to the Galapagos Islands. They are the only species of pelican that is dark in color and dives for its food. Like fishermen, all they like to do is catch and eat fish!

Seeing a pelican at just about every marina was not always the case. In the mid 1970’s, this species range was not so vast. In fact, Brown Pelicans almost became extinct. The decrease in population was directly related to the pesticide DDT. When the pelicans ate fish contaminated by DDT, which was used on crops and washed away to the oceans and Gulf, the pelicans laid eggs with shells so thin, they would break during incubation. It was so dire, that Louisiana had no Brown Pelicans left. Florida, Texas and California all listed the pelican as “endangered’. By 1975, DDT was banned and the first Brown Pelican egg to hatch successfully in captivity was the Suncoast Seabird Sanctuary in Indian Shores, Florida. Since then, the overall population rebounded, peaking in the mid 1990’s but decreasing in number of breeding pairs since 1995 until now. There are issues in southwest Florida for this species from habitat loss, food sources and environmental as well as human impacts to the population. The graph depicts data gathered over the past 35 years by Ted Below, noted ornithologist. The population of Brown Pelicans in and around Marco Island, known as the Marco Island Complex, has decreased by approximately half in this period of time.

In Florida, Brown Pelicans roost and nest in mangroves, preferably in large groups, or colonies, on small, isolated mangrove islands. Crossing the Jolly Bridge, looking to the south, one can see three mangrove islands or rookeries, known as the ABC Islands that Brown Pelicans have used for decades to roost and nest. The ABC Islands are designated and posted as a Critical Wildlife Area and can not be approached by any boat, including non-motorized boats, such as canoes or kayaks. This ensures no disturbance of the important roosting and nesting site not only for the pelicans but other water birds that use the ABC Islands such as Great White Egrets, Snowy Egrets, Magnificent Frigates, Blue Herons and White Ibis. The pelican nests are built by the female using sticks and grasses. Breeding begins in the late fall or early winter resulting in two to four eggs that are incubated by both the male and female for 30 days. The chicks will be fed fish by both the male and female and by 12 weeks are able to fly and leave the nest. But the “family” will stick together, with the adults teaching the young how to fly and catch the fish. Young pelicans are often seen being fed by the parents even after they can fly on their own. Learning to fish is hard work!

The hatched chicks are featherless, but soon covered with white, downy feathers. Bird guano is used on the fair chick to prevent sun burn and heat impacts. By eleven or twelve weeks, the young are ready to fly on their own, but are not sexually mature until they are two and a half to three years in age. At any age, the male and female pelicans are extraordinarily hard to tell apart; the only difference is that the beak of the male is slightly longer. The immature, or 3 years or younger, Brown Pelicans, will be brown with a white belly. In their first year, their neck will be brown with a white belly. In their second year, their neck and upper body will be gray and the belly feathers are still light but will begin to darken. By their third year, the adult plumage will finally show a very dark belly. When you see a group of pelicans flying over – check the bellies! The lighter colored bellies will be the young pelicans. 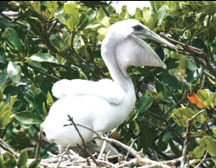 complicate plumage identification further, in different locations throughout the Brown Pelicans’ range, plumage changes occur in the adults at different times of the year. Around here, in fall, the neck and head will start to turn white in the pre-breeding season with the head and neck turning dark brown in early winter as the breeding plumage slowly wears through for the rest of the year until it changes white again in the next early fall. If breeding and nesting, both male and female Brown Pelicans will have yellow head feathers. In contrast, just nearby in the Keys, Brown Pelicans breed all year; therefore any kind of plumage can be seen at all times in different birds!

With its wingspread of six or seven feet and light body, weighing between five to eight pounds, Brown Pelicans are built to soar and search wide areas of the Gulf of Mexico for fish. They can fly up to 35 miles per hour if the winds are cooperating. The Brown Pelican is the only species of pelican that dives for its food; other species, such as the White Pelican, will swim and “herd” fish, scooping them out of the water. The Brown Pelican, soaring and looking for schools of small fish, will turn downwind and fold its wings, causing the bird to fall straight down to the water’s surface. As it reaches the water, it will fold the wings back further and extend the beak. Once it hits the water, the beak will be open and its pouch will automatically stretch to capacity, filling with water and the small fish it was aiming for – some fish will be in its pouch and others will be stunned, which the pelican quickly scoops up with its long beak and pouch, just like a net. The throat pouch can hold up to three gallons of water and fish, about twice the capacity of its stomach. Water is drained from its bill at the sides of the mouth. If the fish are not eaten on the spot, the fish are never carried in the pouch, rather in the gullet. There is special padding around the head and chest to prevent injury in this repetitive “controlled crash landing”. And contrary to tales of blinded pelicans, the Brown Pelicans’ eyes also have special clear eyelids which protect them like goggles.

Current issues and what can you do?

The decline of the local Brown Pelican population documented from 1974 through today by Ted Below, tells the tale of environmental impacts such as storms and global warming to direct human impacts such as habitat loss, food supply decline, oil spills, feeding pelicans and fishing line and trash in the environment. When roosting and nesting habitats are destroyed or removed by storms, development or pollution, impacts to population are negative. Removing or over trimming mangroves is a double edged sword to a Brown Pelican – roosting and nesting sites disappear as well as the habitat that is needed to produce its diet – fish. Mangroves are vital for south Florida for storm protection, water quality, and habitat for all the wildlife we enjoy and millions of others come to see.

Please don’t kill pelicans with kindness. Pelicans will gather while you fish; please do not give into their persistent begging for bait or small fish that are caught. Pelicans, especially the immature ones, need to hunt and feed by themselves. When cleaning fish, don’t throw the scrap of tail and back bone to a waiting pelican. The fish bones will get caught in the pelican’s throat, scratching or ripping the throat pouch which in turn can get infected and kill the bird. Place fish carcass down a tube so it goes to the bottom for decomposition. It there is no fish deposit tube at the dock, please bag up the fish remains and dispose in the garbage. Please dispose all fishing line properly. Fishing line lost or tossed into the waters end up entangling all marine life and resulting in death. Fishing line, many times with hooks still attached, is found in roosting areas and nests. There are fishing line collection stations located at many marinas and boat launches. If there is not a collection station, please dispose of the line in a garbage receptacle that wildlife can not enter.

If an injured pelican is found, please contact The Conservancy of Southwest Florida’s Wildlife Rehab Center at 239-262-2273. For more information on pelicans and other shorebirds, go to www.MyFWC.com. To report all wildlife issues please call 1-888-404-3922 (FWCC).