The Bald Eagles are back! 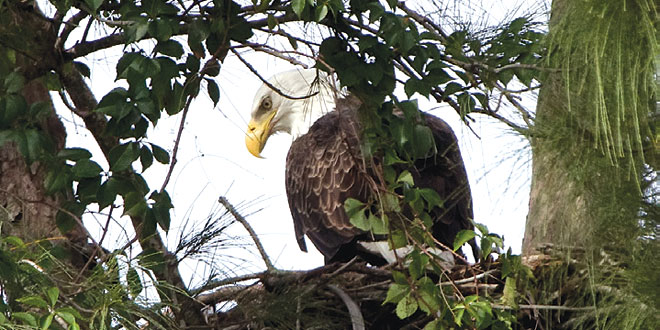 “Actually, thse Eagles don’t leave the property. For the entire year they’re here, they just leave the nest tree,” explains Linda Turner, Director of Operations for MESF. “They’re here, but they’re just not very visible until they come back to the nest tree. Typical nesting season is October 1 through May 1, or even into the middle of May. But we typically see these two eagles in September flying up and around the tree; they start poking at the nest and can both be up there at the same time.”

Although not a native tree, Paleo and Calusa have chosen a specific Austrailian Pine to birth and raise their young year after year. According to Linda, locals say the pair have been nesting in the area since around 1987. Located at 665 Tigertail Court, the 11.6 acre property that is the Marco Eagle Sanctuary has been maintained for the eagles by the MESF since 2010. The not-for-profit 501(c)3 organization is 100 percent volunteer based. These volunteers host two annual fundraisers and maintain the site and protect it.

Space is important for the eagles, especially during nesting season. The only nesting pair currently on Marco Island, Paleo and Calusa failed to produce successful eaglets due to fireworks being lit off on New Year’s Eve at a resident’s home in the area. The birds of prey were frightened, flew away from their nest and eggs, and by the time they returned, it was too late.

“Once one is sitting on the nest full-time, eggs are there,” says Linda. “They actually share the nest responsibility because the clutch (or eggs) will fail if left uncovered for only one and a half to two hours.” Sadly, this was the case in 2012. “The Foundation sent letters around the neighborhood near the Fourth of July and we had no problems,” Linda adds. “We will remind them again during 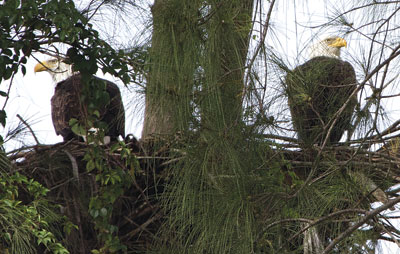 these times of year as a courtesy request.”

As the eagles begin to build their new nest, Linda, MESF Founder Carl Way and the rest of the MESF volunteers look forward to the upcoming season and future eaglets.

“It’s entertaining to watch them at this point as they start building their nest. Some of the neighbors will cut their branches in uniform size, and they’ll leave them in piles out in the field nearby their home. They watch the eagles come in and pick up the mango branches or pine branches. They pick them up with their beak and then they fly up, and then they let go and they catch them with their talons. Then they take them up to the nest and we watch them start poking these branches in.”

Linda adds that it’s comical to see how humans and nature mimic each other, stating that the male will add a piece, and as soon as he flies away the female will remove it or fix it. When the nest is fixed – obviously to the female’s liking – the courting begins, and soon after come the eggs. Once hatched, they are referred to as eaglets, and once able to fly, they are referred to as fledglings.

By the end of the season, the fledglings will have moved on to find a nesting site of their own. Their heads will remain brown until they reach sexual maturity, at around four or five years old. They then grow their full head of white feathers – a trademark of the Bald Eagle.

The Marco Eagle Sanctuary Foundation has high hopes for a successful hatching season this year. To celebrate the start of nesting season, the Foundation will hold it’s annual Welcome Back to the Nest party on November 11. MESF will celebrate our National Symbol, the Bald Eagle, on Veteran’s Day this year at the Snook Inn. Tickets are $25 and include food, soda and iced tea. Cocktails will be available at Happy Hour prices and there will be door prizes, a 50/50 raffle and live entertainment. The party starts at 4:30 and ends at 7:30 PM. To purchase tickets, visit MarcoEagleSanctuaryFoundation.org, send a check payable to MESF at P.O. Box 983, Marco Island, FL 34146, or pick them up at the Marco Chamber of Commerce or Shear Play Hair Salon. Tickets will also be available the night of the event. For additional information, call 239-394-9285.