The Astronomical Station at Cape Romano and the Caximba route 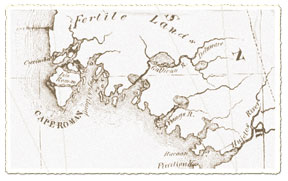 The last few issues of this newspaper have contained excellent articles about Cape Romano, regarding the history of the dome house and the former pyramid house built in the early 1980s. This large point of land is one of Florida’s earliest recognized geographic features similar to Florida’s other large cape, Cape Canaveral. So, let’s investigate the early history of Cape Romano.

Our story started 500 years ago when, in 1513, Juan Ponce de Leon sailed up the Southwest Coast of Florida on his first discovery trip of Florida. A few years later in 1521, he returned to our area only to be wounded in a battle with the Calusa Indians and was taken to Havana where he died as a result of his injuries. Either because of his discovery of this area, or perhaps to acknowledge his death, the Spanish named the large bay stretching from Cape Sable north to Cape Romano as “Juan Ponce de Leon Bay”; it retained that name for centuries. By 1762 the English had invaded and taken control over Spain’s principal colonial city Havana, the hub for its holdings in the Caribbean. They almost immediately traded Havana back to Spain in 1763 in return for what the English would call East Florida (now known as the peninsula) and West Florida (now known as the panhandle). The British sent out surveyors to chart their newly acquired coasts and, in 1765, surveyor William G. De Brahm, started working his way around the Florida coast routinely changing Spanish names to proper English ones. The old “Juan Ponce de Leon Bay” became the new large Chatham Bay with Gullivan’s River (now Blackwater River) in the bay’s northeast corner.

“Our story starts 500 years ago with Ponce de Leon.”

The next surveyor appointed by the English, Bernard Romans, who despised De Brahm- probably because Romans was owed money for surveying work he had done when De Brahm was his employer- said this about De Brahm’s work:“I have carefully avoided the change of well-known names of places; but preserved the old ones, except only in two or three places where the name was not well known, or where there was none at all. Nothing can be more absurd, or productive of confusion, than the assuming new and fantastical names in places of so much danger; yet the author of a certain pamphlet, published two years ago, has done this at no small rate.”

This statement, however, did not stop Romans in 1771 from seeing an opportunity to change the old Spanish name of “Punta Larga” (Large Point) to a new, and in his mind, more fashionable name of Cape Romans! Shortly after the end of the American Revolution in 1783, Spain once again acquired all of Florida back from the English. Apparently it was not worth their trouble to re-establish the old Spanish names for rivers, places and islands and, for the most part, Spain simply left the English names intact, but in some cases those names evolved to sound more Spanish – Cape Romans eventually became Cape Romano. 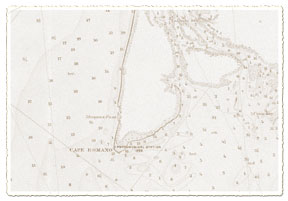 1821, the United States obtained Florida from Spain for $5 million (a way to repay debts Spain owed us). As the U.S. developed nautical charts of the area, they showed the heavy shoaling south of Cape Romano with numerous ever shifting sandbars, and before long American guidebooks were suggesting that this dangerous area could be avoided by using the “Caximba,” a channel or route that would have taken one up and around the shoals via the current Marco River entering at Coon Key, passing the current Goodland, and exiting out to the north through Marco Pass. By 1837 John Lee Williams, who traveled around the exterior of Florida, wrote, “Punta Longa, or Cape Roman, is situated in latitude 26° and longitude 6° 46’ W. It is the south point of a large island, and projects fifteen miles from the main land, and from a S. W. point a succession of sandy shoals extend fifteen miles farther, in a S. S. W. direction. Vessels drawing six feet water may avoid this cape, by passing through the Caximba and by a passage of nine miles, shun a dangerous voyage of sixty miles.”

Florida evolved from a territory to becoming a U.S. State in 1845 and one of its first obligations was to survey land and divide the state into “government lots” for sale. Cape Romano was surveyed by John Henderson in 1878 and was subdivided into parcels for future government sale. However, again recognizing the historic shoaling to the south of Cape Romano, the official government surveyor noted on the survey that the U.S. Secretary of Treasury had ordered that Cape Romano be set aside for a future lighthouse.

Our story picks up in 1886 when charts of the area show the “Cape Romano Astronomical Station” in the area of the current dome house, leading one to wonder what is an Astronomical Station? A 1913 government book entitled “Triangulation along the West coast of Florida” describes the station: “On Cape Romano 6 meters back of high-water line and 315 meters north of the most southern point of the cape. The station is marked by a hole in the top of a marble post. A tile is buried 16.04 meters due north of the station and another 15.50 meters east by north. A large buttonwood tree marked with a blazed cross is at the edge of the woods about 125 meters north-northeast from the station and a large red mangrove tree similarly marked is at the edge of the woods about 160 meters east by north.” So what was this station? It was not a building and no one lived there, it was simply a government marker – a small round brass disk with a hole in the center and a legend that said “U.S. Coast and Geodetic Survey Triangulation Station. For information write to Superintendent, Washington, D.C. $250 fine or imprisonment for disturbing this mark.”

“Our story picks up in 1886 when charts of the area show the “Cape Romano Astronomical Station.”

The station had been established in 1885 and later was revisited 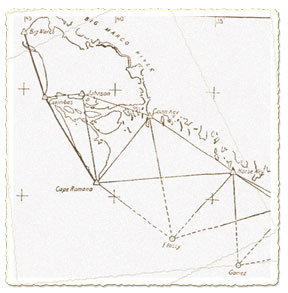 A portion of the Triangulation Map of the Astronomical Stations printed in 1913. SUBMITTED PHOTO

in 1887. It was one of 1,150 different stations around the Gulf Coast of Florida, others nearby included one at Pavilion Key, Horse Key, Coon Key, Johnson Station on top of Indian Hill (Charles Johnson owned Indian Hill selling it later to the Barfields), Caxambas, Big Marco, Little Marco, Gordon Pass, and so on. The purpose of these stations was to create points along the coast where triangles could be established in order to “trigonometrically correlate on one geodetic datum” the specific locations of Florida’s Gulf Coast. They were called Astronomical Stations because the origins and standards for latitude and longitude were usually determined by astronomic observations.

As can be seen from a map of their work, some of the points of the triangles were out in the Gulf waters and had strange names like “Flossy.” It is not clear how these were established or ever found again. In 1901 the Federal Government adopted the U.S. Standard Datum – which in 1913 became the North American Datum after both Canada and Mexico adopted the same system. The data collected for this effort was used by geographers and cartographers to create early maps, including correcting the attached 1893 chart. Today’s Global Positioning System (GPS) makes this early effort in mapping our coast look like enormous work and at huge expense, but it was the technology of the day.

On April 12, 1898, two months after the sinking of the U.S.S. Maine in Havana harbor, which started the Spanish American War (and would bring Teddy Roosevelt and his Rough Riders to Florida and then on fame winning the battle of San Juan Hill in Cuba), President William McKinley issued an executive order permanently reserving the southern point of Cape Romano for a lighthouse. The reason given was to protect the heavy ship traffic which was expected between Tampa and Key West, for transporting military supplies and troops to the war front in Cuba. The war against Spain only lasted 64 days and Cuba gained its independence as a result.

The closest lighthouses to Cape Romano are in Key West, built in 1826, and the one at the south tip of Sanibel Island, constructed in 1884; both still exist and are worth visiting. The 1901 minutes of the Annual Lighthouse Board show that the U.S. Secretary of Treasury asked the Speaker of the House of Representatives for $45,000 for a lighthouse to be built at Cape Romano, it was requested because of the 100 mile spread between the Sanibel and Key West lighthouses and the large shipping commerce between those points. For years there were discussions in Congress about funding a lighthouse at Cape Romano due to the danger to vessels of the heavy shoaling, but sufficient funds were never appropriated and it was never built.

“For years there were discussions about funding a lighthouse, but it was never built.”

Today, while most of Morgan Island is government owned, other parts of this large island, including Cape Romano, remain in private hands; yet this historic Cape remains one of the most dramatic, windswept, natural places in Florida.