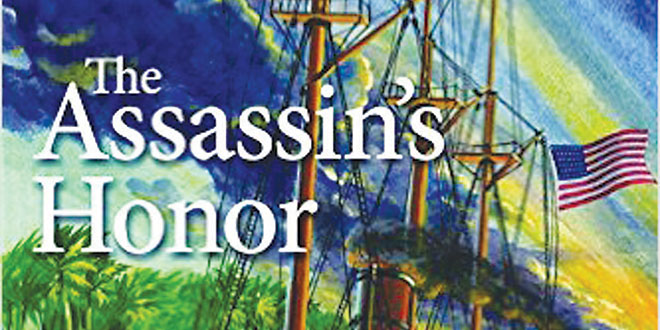 “We of the sea come to know each other quickly; our loves, like our hates, are born of sudden danger.”
– Lew Wallace, author of “Ben-Hur: A Tale of the Christ” and U.S. Civil War general.

“The Assassin’s Honor” is the 12th installment of the Honor Series with Peter Wake as the protagonist. The story is set in the last decade of the 19th century and much of the action takes place at sea. Peter Wake is the commander of the USS Bennington. As a member of U.S. Naval Intelligence, his past includes many espionage assignments and once again, at the advanced age of 53, fate draws him into another spy caper.

When a first class passenger, Mr. Drake, is found dead on the Philadelphia, it is assumed he died of natural causes. His body is immediately embalmed and buried, per usual protocol for deaths in the tropics. Upon clearing his personal effects, a steward noted a piece of a map hidden in Mr. Drake’s pillow case with some German words written on it. It takes a while to decipher the 4-inch square of paper, but they realize that the map is not of Venezuela or elsewhere in the Caribbean, but the Yucatan Peninsula. Using a German dictionary, Wake reasons the Germans are planning a political assassination on December 16, 1892, and assumes the target must be the leader of the Mayan warrior rebels in that region.

Wake gets involved because Mr. Drake was an American citizen returning from working as a German civilian employee in South America. The hidden map seems to indicate there is more to Drake’s role in this situation and that his death may not have been quite so natural after all. The intended assassination is definitely the business of the U.S. Naval Intelligence since it would have immense political repercussions for the United States and its president-elect, Grover Cleveland, set to take office in March 1893. Thus, the wheels are set in motion for the aging Peter Wake with his trusted sidekick Sean Rork to embark on a voyage to thwart the German assassination attempt.

If you enjoy spy thrillers and/or historical fiction, you will find “The Assassin’s Honor” an engaging read. Once Commander Wake sets sail to abort the Germans’ assassination plans, things move at a heightened pace. There are many new developments and Wake realizes he got it all wrong in his initial assessment of the intended target. The urgency grows after that and Wake pushes his vessel, himself and his crew to their limits.

I am not a nautical person myself, although even I know the basic stern and 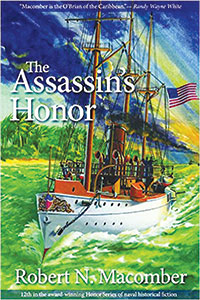 aft, port and starboard, but that is not necessary in reading this story. Mr. Macomber weaves explanations of the seafaring jargon into the storytelling so that the reader does not feel adrift if they have not read any of the previous Honor Series books or like me, have no sailing experience.

The author covers a lot of territory in this story. Not only do we learn much about the ships of that time, but also communication, i.e., letters and telegraphs. In addition to his well-written descriptions of the furnishings, food, clothing, and etiquette of that era, he weaves prominent political and business figures into his story flawlessly. Since Commander Wake has been in Naval Intelligence for 29 years, dating back to his blockade days during the Civil War, his experiences have acquainted him with many of these people. Wake is well connected in military and political circle but also has enemies in those same circles.

The book is well researched and the author does not take blatant liberties with fact as do some writers of historical fiction. I enjoyed reading the details of the operation of the ship, furnishings of the ships as well as hotels and homes, meals, dress of both men and women, and the etiquette of the period. Because it was set in the late 19th century, there was no instant communication as we have today, the storyteller had time to develop these characters while they waited hours for a response to their urgent telegrams or messengered letters. The plot involving the assassination is engrossing and credible. I was sure I had it figured out a few times, but another loop was added to the maze.

It was fun being carried away to another era set mostly here in South Florida and the Caribbean. The hero and a couple of other characters are a little too perfect, and I have some reservations about the behavior of Wake’s lady being appropriate to the time, but it did not significantly lessen my satisfaction with the read. Take it with you for a day of escapist reading at the beach, or better yet at your own pool or lanai – turn off your cell phone so you can get into the spirit of Wake’s time. Voicemail is your friend. Rating: 3.5/5.0.