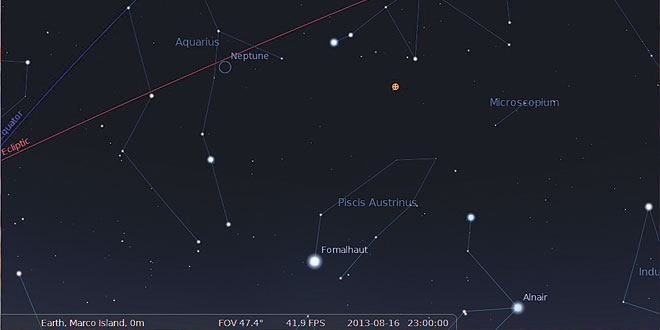 In ancient Greek mythology Aquarius was the cup or water-bearer to the gods. He was a male lover to Zeus, (one of several) and was rewarded with both a place on Mount Olympus and in the sky. It’s not a bright constellation, yet it is not particularly difficult to pick out in the sky if you are looking in the right spot. Look above and a little to the left of Fomalhaut, which is the only bright star in this part of the sky.

Aquarius sits astride the ecliptic which means planets continually pass through it. Tonight, and for the next six years or so, Neptune is located here. At just under magnitude 8, Neptune is a target for binocular users; it will appear star-like in size but probably will not twinkle as much as the stars around it. A modest sized telescope will show Neptune’s tiny disk and only a very large amateur ‘scope will reveal Triton, Neptune’s huge satellite. If you want to hunt for Neptune with your binoculars, drop me an e-mail and I will send you a finder chart.

One of the odd things about Neptune was it was first spotted by Galileo, but not recognized as a planet by him as his tiny telescope was inadequate for the task and he was not looking for its motion among the stars. Centuries later it was thought an additional undiscovered planet was lurking in the outer Solar System due to minor orbital peculiarities in Uranus’ orbit. The presumed planet had its position calculated in 1846 and a search revealed Neptune to the world.

Probably a much easier target to find with your binoculars is M2, a fine globular cluster in the northern reaches of Aquarius. At magnitude 6.5 it is bright enough to spot with your trusty 7×35’s.

Fomalhaut, as mentioned above, is the only bright star in this region of the sky and is the alpha star of Piscis Austrinus, the southern fish. In old renditions of the constellations Aquarius is shown pouring water into its mouth. Except for Fomalhaut, the constellation is excessively faint and is only worth finding if you have a checklist to mark. The same thing can be said for the even fainter Microscopium; a space filler invented several centuries ago to celebrate the invention of the microscope.