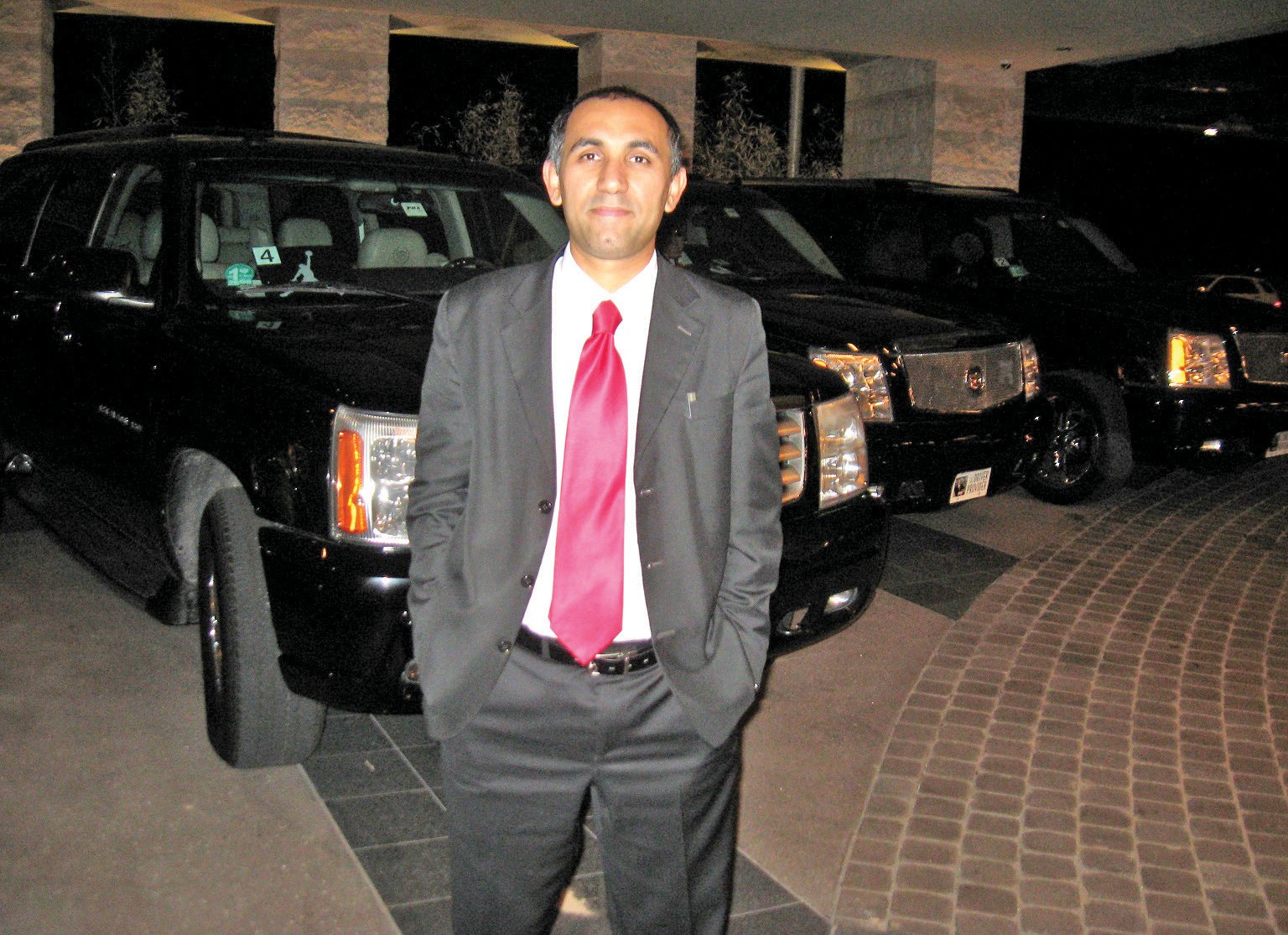 David poses in front of his limo, waiting his turn for a fare at a high end Scottdale resort hotel (2007).

I mmigrants entering the U.S. have usually spent years and a relatively large amount of money trying to get here. It is normally a painstaking process and only the persistent and committed make it through. Davood (or David as he is known to us) Kaheh is nothing if not persistent and committed. From the time he left home and family in Iran in 1995, it took him nearly eight years to get to the U.S., with a two year stop in Turkey and six years in Germany (See “The Iranian Limo Driver” at coastalbreezenews.com). Finally in July of 2003, David deplaned at Phoenix’s Sky Harbor Airport, with a green card (conferring lawful permanent resident status) in his pocket and $500 in his 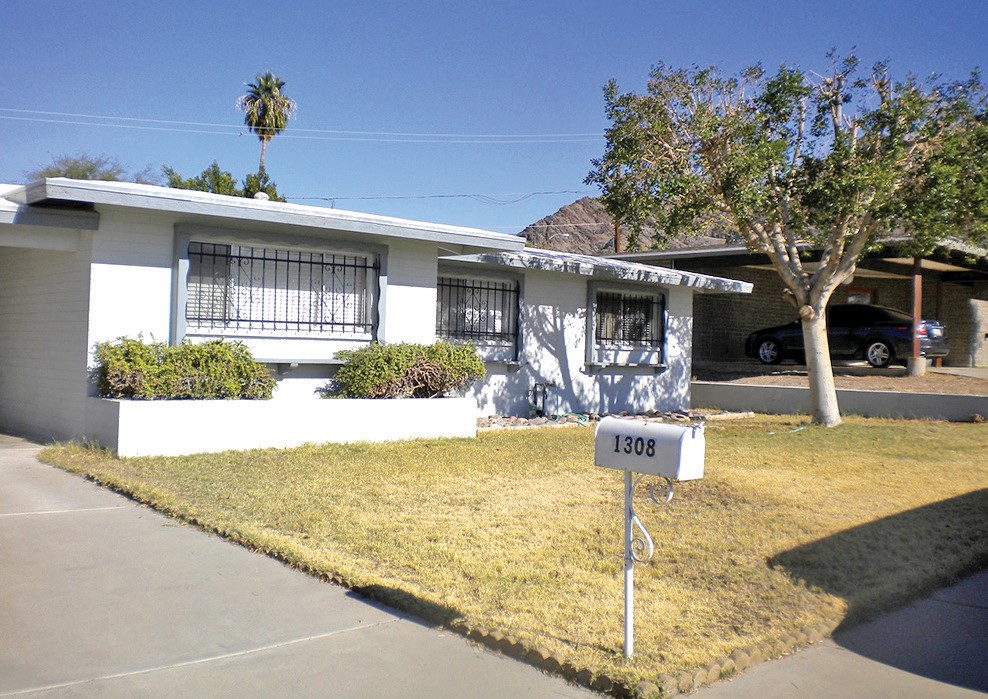 The Kaheh’s residence, built in 1961, purchased in 2008, and still the family residence today. It is in a modest middle class neighborhood of 1,900 square foot homes. Profits from David’s enterprises are mostly plowed back into the business.

wallet. Since an early age he had yearned to establish his own business. Germany had at first seemed an ideal place for this, but David soon learned better. “There was no real future there for young people from other countries,” he said, “White Germans always had privileges that we could never have. Significant job openings seemed always to go to a German born before any Auslander (outlander or foreigner) could even apply.” Now he would try his luck in the largest economy and most welcoming country in the world.

In Phoenix, David rented a room from a fellow Iranian and began taking college courses, emphasizing English. He supported himself at minimum wage (then $5.05 an hour), as a cook and cleanup man at 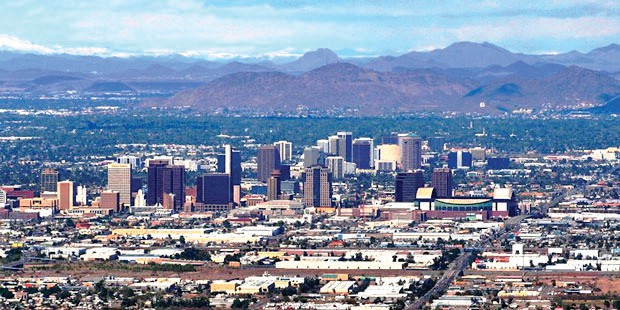 Phoenix skyline looking north. The Kahehs live in a mountain defile at the base of the third hump of the mountain at upper middle. Diamondbacks’ baseball stadium is at lower middle right.

a restaurant, a freezer stockman, at a 99-cent store ($6 an hour), a deli worker at a supermarket ($10 an hour), and as a part time pizza delivery man. “I was working pretty much all day and getting only about four hours sleep at night,” David said, “I tried to catch up on weekends and managed to save most of what I made.” It was a dog’s life, a German redux. Then David saw a possible way out. It was parked on the driveway, out front. It would change his life’s trajectory.

His roommate had managed to buy a Lincoln Town Car, which he was using to ferry passengers to and from the airport at night; then, he would sleep all day. David 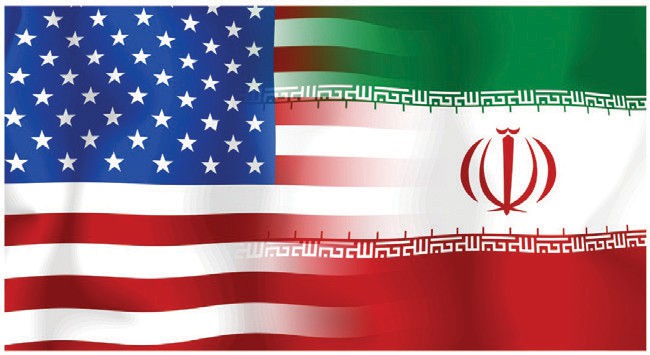 asked him if he could rent the car during the day. “Your car is just sitting there during the day doing nothing,” David told him, “I will pay you for the use of it during the day, provided you train me in the business.” The roommate agreed, but after a few weeks, David saw that he could make more money driving a limo, both day and night. In November 2004, David signed up with the Your Ride (YR) limousine company, which kept 100 of their limousines busy ferrying people to the airport by day and to upscale watering spots by night. They were renting limousines to their contractors at $1,000 per month plus a fee of $350 per week for the privilege 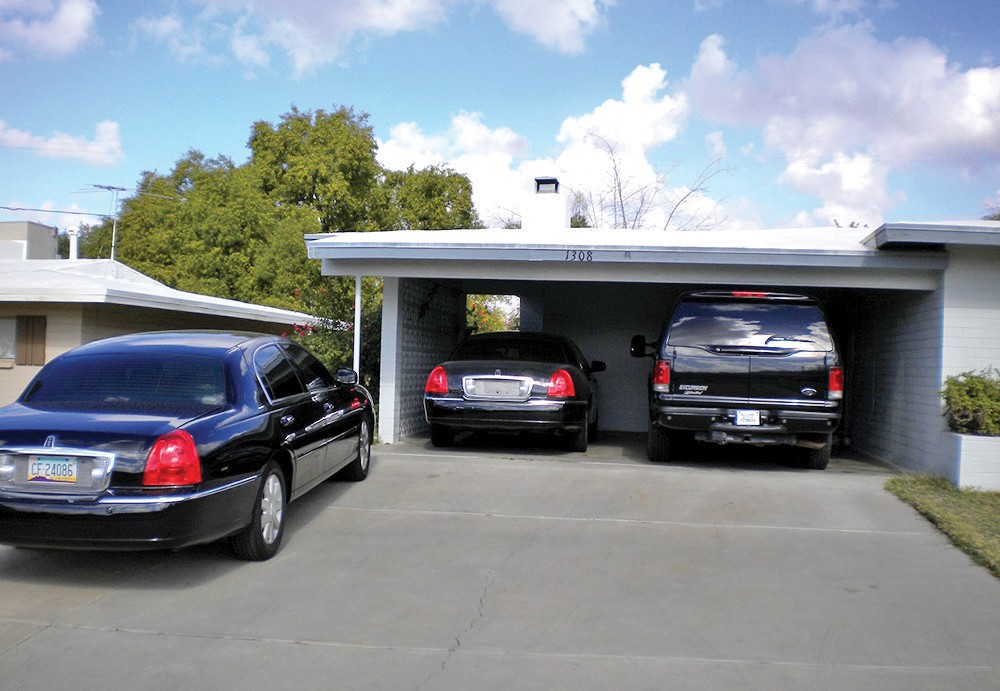 In 2007, before opening his repair shop, David had to store his limos at home.

of waiting in line for business at high end Scottsdale resorts. David wanted to keep more of what he made and, using his savings, bought his first limousine, a 2000 Lincoln Town Car for $11,000 (originally retailing at $39K). This eliminated the $1,000 a month rental for one of YR’s cars. Additionally David offered to bring in more business and additional drivers to YR if they would agree to sell him some of their old limousines. David would fix them up and rent them to additional drivers, who would come to work at YR. These drivers would continue to pay the $350 per week fee to YR but would lease their limousines from David. YR agreed to the arrangement and additionally waived 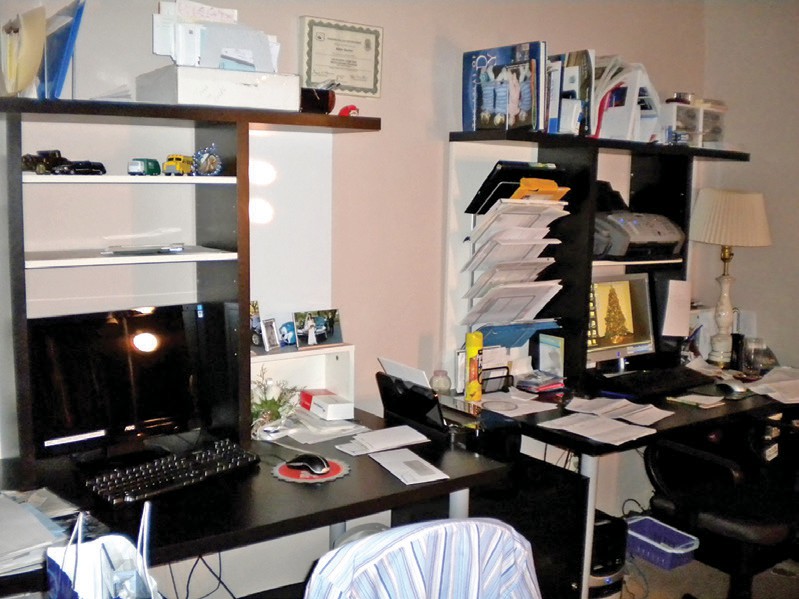 A wider view of David’s bedroom office. The family desktop is at left.

this fee for David. “I had a lot of contacts in the Persian community,” said David, “I was sure they would be willing to lease cars from me, as I could offer them at cheaper rates than what they were paying at other companies.”

Over the next three years (2004- 2007) David managed to buy 20 older limousines from YR, and, recruiting his own drivers, put all of them to work for that company. Working “24/7, with no days off,” David sunk “every penny” he made into the purchase of older limos from YR, paying cash for each limo. After fixing them up at local mechanic shops, he’d lease them to his recruits. In 2007, David opened his own repair shop and hired 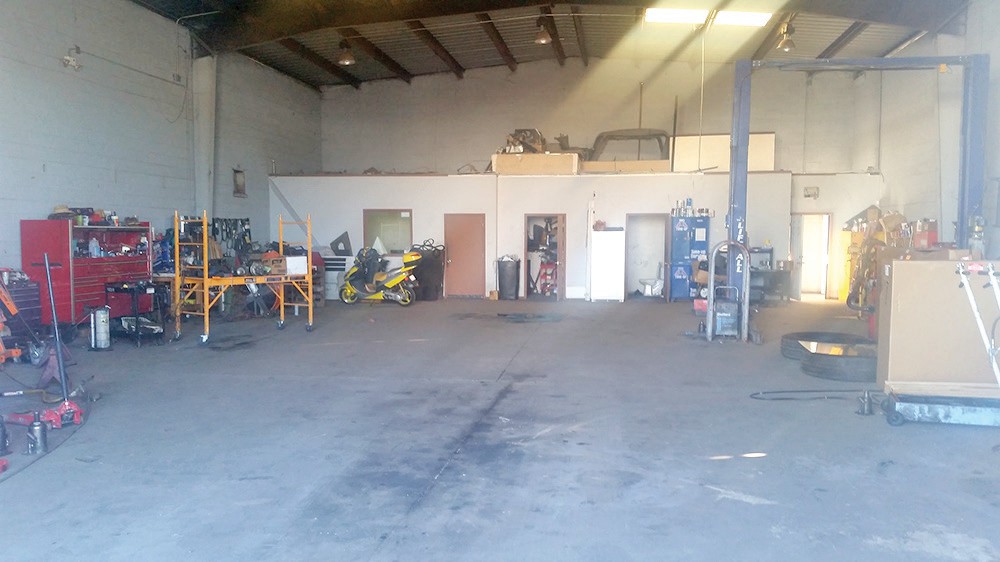 An interior view of David’s first repair shop in 2008.

a full time mechanic. Repair business came in from other limo drivers and even some bus companies. He was also able to purchase a few income properties.

By 2008, his income was averaging $600 a day and the sky seemed to be the limit. 2008 was a momentous year for David. In succession, he incorporated Arizona Corporate Coach (ACC), married Nikki Gwinn, a cute and spirited college graduate, bought a home, became a naturalized U.S. citizen, and topped it off with the birth of a son near the end of the year (a daughter followed two years later). Nancy and I spent a lot of time in Phoenix that year. To us, it seemed that our daughter and new son-in-law were forging a 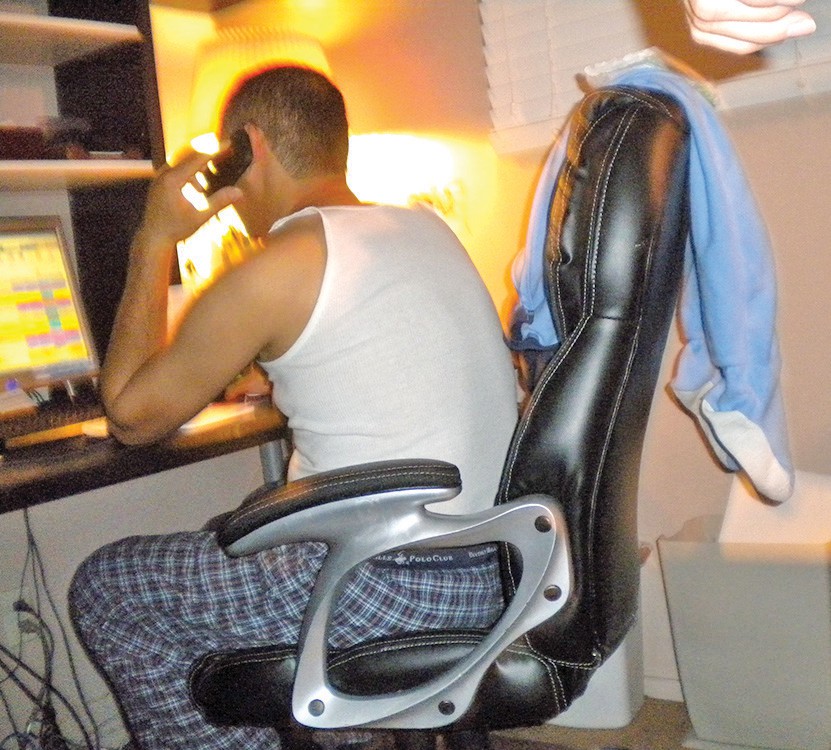 Until 2010, David ran his business out of a spare bedroom in his house. Here, he works into the night after the kids have been put to bed..

wonderful success story, which could only get better. It didn’t. It got worse – much worse. By 2008, it was painfully obvious that the economy was in big trouble. In 2007, David had had big plans for ACC, when he was considering its incorporation. He wanted to expand his business and place its assets under one roof. “This is not going to last,” he had brooded previously, “I’m not always going to be making $600 a day. I have to get something more.” Before formulating his plans, the Great Recession devastated the economy. Such persistent and massive long-term unemployment had not been seen since the Great Depression of the ‘30s. The food and travel industries, David’s bread and butter, were particularly hard 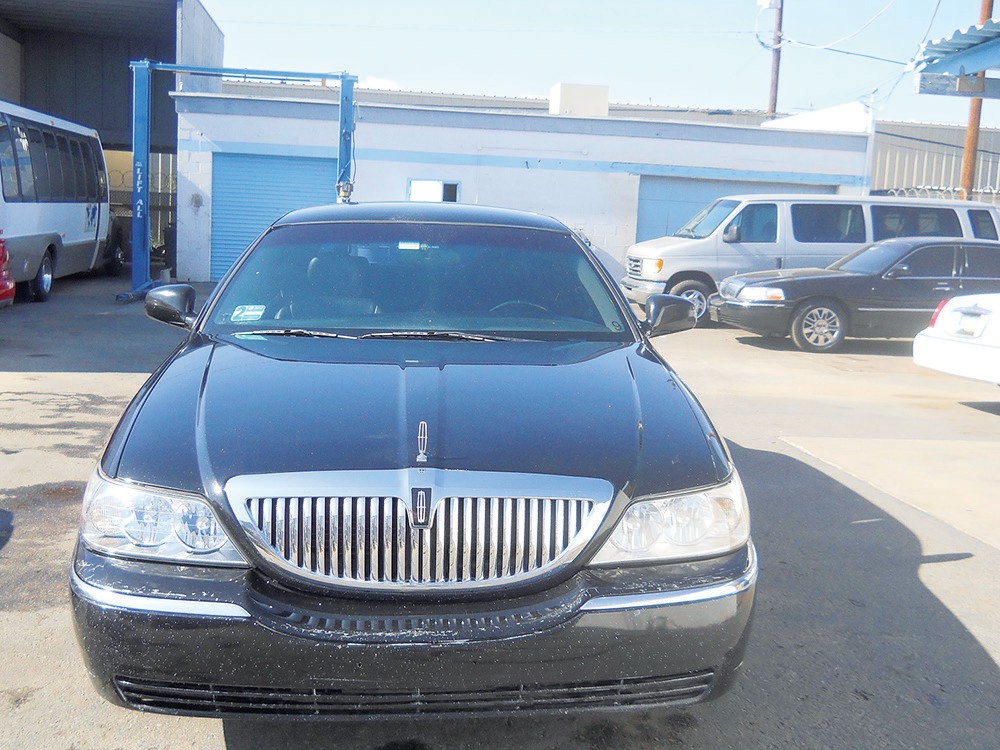 hit. David began selling his limos and other investments just to pay his bills and stay in their modest four-bedroom home. By 2010, all that was left was his five limos and his repair shop. His income had taken an 80% hit. “It was all we could do to pay the mortgage and keep the family going,” he said (both were working now), “but I knew that the recession wouldn’t last forever and wanted to be prepared when it ended.” Two years later, in 2010, his preparation paid off.

Businesses, large and small, were resorting to the bankruptcy courts. The Wigwam (WW) located in a western Phoenix suburb was one of them. One of the most storied resorts in Arizona and considered by 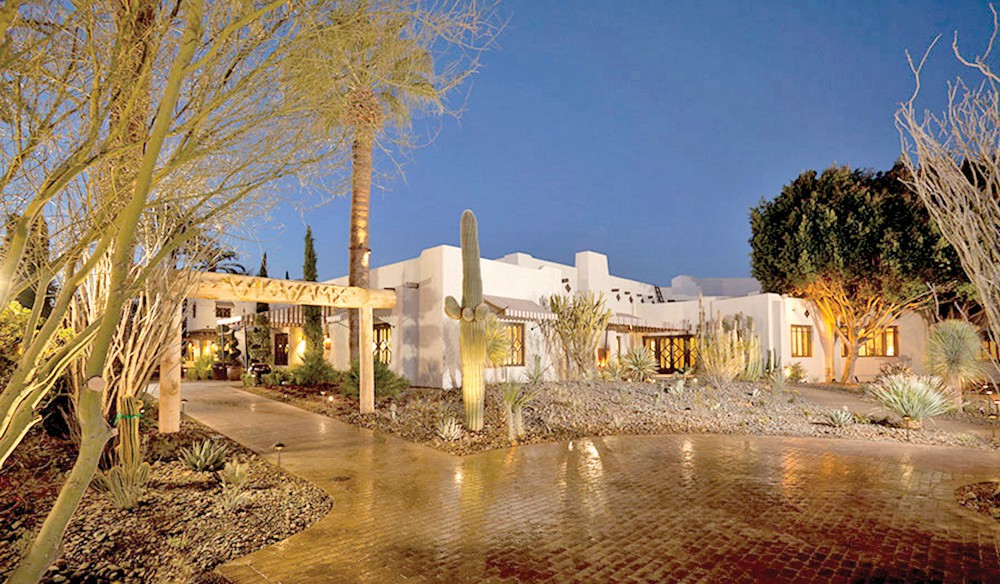 The arrival court at The Wigwam, in the western Phoenix suburb of Litchfield Park. It was here that David had his interview with the resort manager and was later given his first out of the house office.

many to be the glitziest, WW, with its three golf courses, had fallen on hard times, and in 2010 was struggling to emerge from bankruptcy. In better days, David had gotten to know some employees in WW’s transportation department. He learned that WW had lost all their rolling stock in the bankruptcy and had completely shut down their transportation department. The employees gave David a list of names to call. With only his fleet of five limousines, and his Phoenix repair shop, David took a leap of faith and made a gutsy proposition to the Wigwam resort manager, with whom he had finally wangled an appointment. David knew that WW now had to deal with various limo and bus companies to accommodate 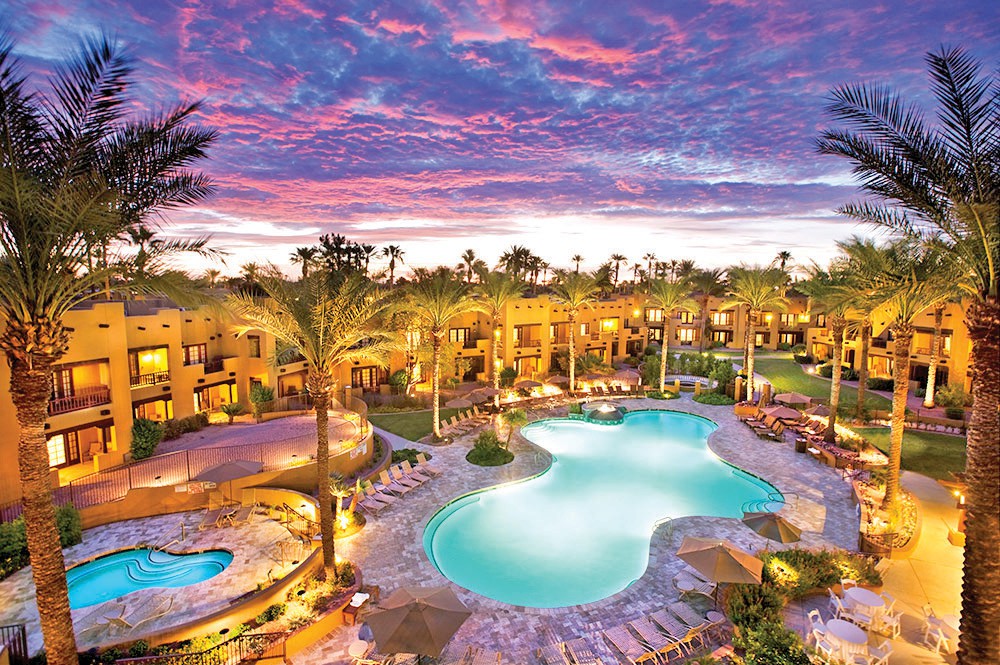 their guests, for transportation to and from the airport and tours around the area. “This was an expensive and time consuming proposition for them,” David said, “It was draining time, money, and personnel from the actual administration of the resort. I was hoping they would see it this way. I offered to provide and manage transportation for their guests and visiting travel agents at no expense to WW, on condition that they would throw all of their additional transportation business to me. I asked for 24 months to prove that I could do this. After checking David out, they accepted his offer and gave him an office at WW to work from. Now things really started to happen. David was ready for it.