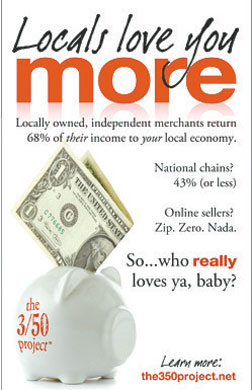 The 3/50 Project went viral when a “Buy Local” campaign sprung from a single blog post in March 2009, supporting independent, locally owned “brick and mortar” businesses. By educating about the impact of their spending habits, the Project’s goal is to increase consumer spending in a way that delivers the greatest amount of financial benefit to local community economies.

During the Financial crisis of 2007- 2008 small business owners saw pronounced shrinkage in consumer spending from quite early on, leading many to fear for their existence. In March 2009, on the heels of a week filled with particularly dire media headlines, Minneapolis, Minnesota based retail consultant and professional speaker, Cinda Baxter wrote a blog post titled “Save the Economy Three Stores At a Time” in hopes of inspiring small business owners to unite under a single banner with the common goal of reigniting local consumer spending. One week later she created a flyer that included the Project’s message that could be reproduced on a desktop printer, again posting it on her log with little expectation its use would extend beyond friends and family.

Within the next five days, however, more that 350 emails arrived from businesses around the country asking what other materials were available. The following Monday, March 30, 2009, The 3/50 Project website was launched, having been quickly constructed the day before, to give enthusiastic supporters a place to land. In the first seven days, more than 7,600 people found it, 8,600 if you count repeat visitors. The 3/50 Facebook page launched on April 1 and had more than 60,000 fans in under fifteen months.

The project’s tag line, Saving the Brick and Mortars our Nation is Built On, refers to its sole purpose-retention of locally owned, independent businesses whose dollars provide a large portion of annual revenue critical to funding public resources and services. Consumers are asked to think of three businesses they would miss if they disappeared, then return to them, with a reminder that those transactions are what keeps doors open. The number 50 ties in to the fact that if just half the employed U.S. population dedicated $50 of their current monthly spending to locally owned independent businesses, more than $42.6 billion of revenue would be generated annually. The 3/50 project message then explains that for every $100 spent in local, independent brick and mortar businesses, more than $68 returns to the local economy; when spent in big box or chain stores, the amount drops to only $43.

Much of the 3/50 Project’s success has been attributed to its simple, consumer-friendly message. Unlike traditional Buy Local campaigns the Project speaks in what’s been referred to as “dinner table language”, avoiding technical terminology or mathematical equations. By focusing consumers on only three businesses and $50, the Project message was viewed as simple, personal and achievable-without being exclusively political or protectionist.

When asked what exactly it is that she does, founder and president of the 3/50 Project Cinda Baxter answered, “I hand Superman capes to small business owners, then teach them to fly.” Mix this all together with a deep seated desire to create a message that’s positive, achievable, and easy to accomplish, anyone wishing to obtain any of the Project’s materials need only to request them by going to the website. They make available free flyers, a LookLocal iPhone app, as well as other marketing materials.

The message is simple, reconnect consumers with locally owned, independent brick and mortar businesses and it all starts with us.

Coastal Breeze News is a proud supporter of the 3/50 Project and urges our readers to become supporters so together we can save the Brick and Mortar Our Nation is built on. For more infomation and to become a supporter go to www.the350pro ject.net