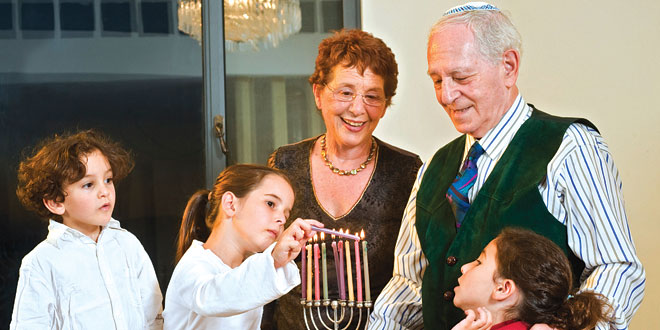 The lighting of the Menorah signifies the miracle of the eight days the Temple’s candle stayed lit on one day’s worth of oil.

Actually, the two holidays have some things in common, such as the theme of celebrating the goodness of life. But Chanukah differs from most others Jewish holidays, in that it is a post-biblical (not mentioned in the bible) holiday addition, and therefore is considered to be a “minor” holiday.

Chanukah marks the deliverance of the Jews of Palestine from the oppression of the Syrian-Greeks. The Greeks attempted to impose heathen practices on the Jewish population, but Judah, and his four brothers, sons of Mattathias the priest, led a rebellion against them – and in 165 BCE the rebels defeated the Syrian army, and were able to cleanse and rededicate their Temple.

Until recent years, little fuss was made over Chanukah in this country. Except for the lighting of the “Chanukah menorah” (an eight candle candelabra) – one for each of the eight nights; there are very few changes in the

Only once every 70,000 years do Thanksgiving and Chanukah fall on the same date. SUBMITTED PHOTOS

normal routine of a Jewish home.

The reason given why Chanukah is celebrated for eight days is that after the victory and subsequent rededication of the Temple, (Chanukah means “rededication”) the priests found only one undefiled cruse of oil for relighting the Temple “menorah,” a quantity that under normal circumstances would last only one day. But, miraculously, this one jug lasted eight days – until the new supply was ready.

To commemorate the event, it was decided that the holiday would be observed annually by kindling lights for eight days; thus Chanukah became known as the Feast (or Festival) of Lights.

The food closely identified with this holiday is potato pancakes (called “latkes”) because they are fried in oil, symbolizing the miracle of the cruse of oil which lasted for eight days. Children play with a four-sided top called a “dreidel” with different Hebrew letters on each side. Players receive points based on the designated value of each of the letters the dreidel can land on.

All in all, Chanukah is a minor, fun-filled holiday based on an historic event but will not coincide with Thanksgiving for another 70,000 years!

Thanksgiving and Chanukah have some things in common, such as the theme of celebrating the goodness of life.