Thanking Soldiers With a Day of Fishing 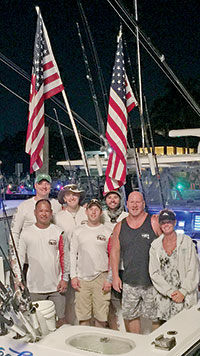 For its sixth year, the annual Naples Take a Soldier Fishing event took place at Hamilton Harbor Yacht Club. This year 62 boat owners donated the use of their boats and their time captaining to bring soldiers and their families on a memorable fishing trip. The soldiers, mostly Air Force and some Marines, were all from the Tampa, Florida area.

Marco Island’s Scott Gibbs participated in the event, and captained his 40’ SeaHunter with four veterans onboard. Scott and his wife Bonnie are the owners of Cocomo’s Grill. Scott told Coastal Breeze News that he became involved in the event because it is “something we can give back to someone who has fought for us,” enabling us to have the privileges and luxuries we have in this country. Scott has a deep respect and appreciation of our military.

The day started bright and early at

6 AM at Hamilton Harbor with a local priest blessing the fleet. The National Anthem played as the boats left the harbor for a day of fishing and fun, led by the Collier County Sheriff’s Office and Florida Fish and Wildlife Commission.

In addition to a great day of fishing, veterans and their families enjoyed food, music by the Ben Allen Band, and the all-important weigh-in once the boats returned in the afternoon.

At the end of the day a banquet and awards ceremony was held. When Scott noticed that there were donations from local businesses he stepped up once again, and donated a $100 gift certificate for Cocomo’s Grill.

This may have been the first year Scott was involved with the event, but it will not be his last. He was so moved by the experience that during the evening festivities he told event organizers, “I’m in it for life if you’ll have me.”