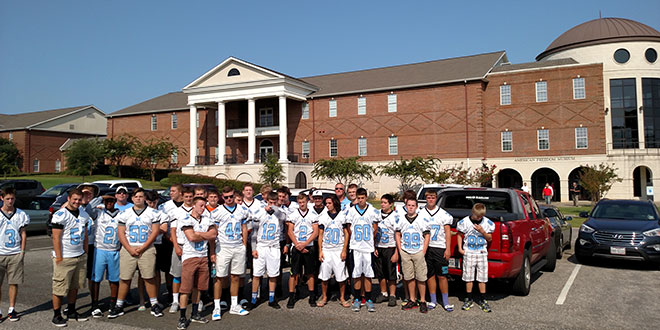 The Marco Island Academy football team outside Brooke Hill School, site of tonight’s game and the American Freedom Museum which they visited

The Marco Island Academy Rays stung Edgewood, Texas early, but the Bulldogs bounced back to take a lead it never relinquished in the Brook Hill Texas Football Classic in Bullard, Texas on Friday night, August 28.

Both teams provided plenty of offense in a 41-28 Edgewood victory. The Rays rang up 348 total yards, while the Bulldogs tallied 446.

Injuries hampered Patrick Michel in his early MIA days, but healthy, he showed the explosiveness the coaching staff knew he had. He rushed for three touchdowns on runs of 3, 22 and 55 yards. Also a stalwart on defense, he picked up a fumble, racing 27 yards for a fourth score. The touchdown effort is a school record.

The Rays came out strong on offense and defense. MIA scored first, with a drive capped off by Michel’s 3-yard TD rush. Then its defense did the job, forcing a fumble that turned into a 27-yard score by Michel, after just seven minutes in the first quarter.

“We needed to keep pushing,” said MIA coach Greg Fowler. “They [Edgewood] are a good team, they weren’t about to lay down.”

The Class 2A Rays are back home, playing 4A Lake Highland Preparatory of Orlando at 7 PM on Friday, September 4, at Winterberry Park. In Lake Highland’s season opener on August 28 they pounded Trinity Christian of Deltona, 59-25.

“This is a very good football team,” Fowler said. “We took teams off our calendar that would give us easy wins. We are in a tough district and we need to play good teams to be ready for the games that will count.”

Keys to the Bulldogs win were quarterback Trey Erwin and running back Tyler Elie. In the last four minutes of the quarter Erwin romped for a 28-yard score, and Elie a 22-yard TD.

All even, Edgewood busted loose for two scores in the second quarter to take a 28-14 lead at half-time.

Erwin threw a touchdown pass to up the lead to 35-14, but Michel made his dramatic 55-yard run to get it back to 35-21. The Bulldogs sandwiched touchdown runs around Michel’s third score to finish up the fourth quarter.

MIA quarterback Andrew Fowler ran for 45 yards and completed 16 of 31 passes for 116 yards, with no interceptions.

“We had five drops (incomplete passes) that could have been for long yardage, possible scores,” coach Fowler said.

A season ago, the Rays lost four games in the second half after having early leads.

“I’m proud of our guys. We need to finish games strong to get wins,” Fowler said.

Go to www.coastalbreezenews.com to see all photos surrounding the game.