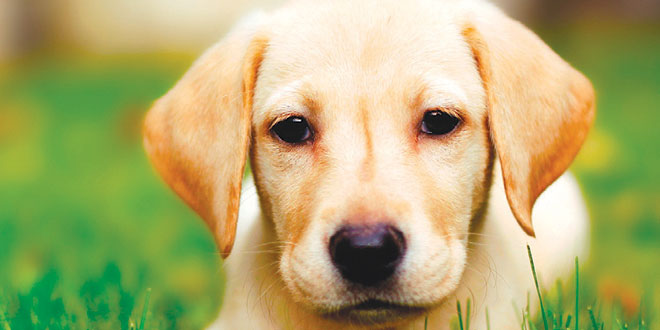 Recently my Most Excellent daughter and Most Excellent son-in-law acquired a brand new, never used puppy. This puppy is of a Most Excellent breed – a Yellow Labrador. He arrived amid great expectations and much fanfare, especially among the remaining household teenagers.

Thus far the best thing about this particular puppy is his name…”Atticus”, after “Atticus Finch” the upstanding noble hero of “To Kill A Mockingbird.” Alas, somewhere in the Most Excellent breed of Yellow Labrador a biological sport arrived. Young Atticus is an unholy terror.

To date the new arrival has chewed up an antique couch – yes, a couch, not just a pillow. He has feasted on various male and female shoes and other articles of clothing (at least he is not discriminatory). He has bored a large hole through one of the screen doors. He has caused two formerly strong-willed cats to shudder and hide. He has intimidated mild-mannered neighborhood dogs despite his youth and good looks. He has ignored training commands, pleas and entreaties to deliver his poop somewhere besides various places inside the home.

The inside of the house bears wartime scars of a one puppy Blitzkreig presumably in the name of playfulness. Behind the mask of good looks and puppy charm there is an unholy, unleashed terror.

After numerous attempts at house training, consultations with leading and amateur puppy therapists and threats of retribution (undecipherable to puppy comprehension) the question remained. What can you do with a puppy from the sub-breed Labradorus Terriblus?

Most Excellent daughter and son-in-law decided to do what parents of unruly, undisciplined teenagers often do. They shipped Atticus off to Doggie Boot Camp, the equivalent of Military School for the sometimes-troubled teens.

A number of weeks ago Atticus departed. Since he left the household quieted down. The cats emerged from hiding. Repair crews patched and painted. New shoes appeared. Poop remains disappeared. All’s Quiet on the Western Front.

From time-to-time they speak to the Headmaster. It appears that Atticus is making some progress. However, he is not the top cadet, and still is lacking the credits for graduation. The good news is that he has not destroyed the Academy, and latest reports are that he may make it. He clearly won’t be Valedictorian, but he may still get a diploma Non Poopus. We’ll see.