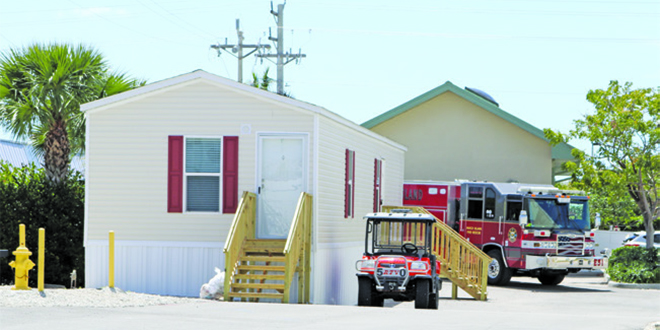 Photo by Steve Stefanides | This trailer at the Marco Utility Complex will serve as a temporary Station 51, until a final plan is made for a permanent structure.

Recognizing the need to deal with increasing demands for service, a rise in traffic in the mid-island area and the potential for delayed responses, Marco Island Fire Chief Mike Murphy put together a plan to reopen the formerly decommissioned fire station on West Elkcam Circle.

With the assistance of on duty personnel and a volunteer effort, the station was reopened three years ago and began running calls from that location, improving response times to certain areas of the island.

“Time is not a friend to us when it involves a fire, a serious injury, or life threatening medical call such as a stroke or cardiac incident. Minutes can mean the difference between a positive outcome, or a sad result,” said Deputy Chief David Battiato.

Therefore, when crews were returning from a medical call late last summer and saw smoke rolling out from their quarters at Station 51 on West Elkcam Circle their hearts dropped, but their instincts immediately kicked in and they quickly extinguished a fire that began because of a lightning strike on their station.

To maintain those improved response times a plan was put into place late last year to acquire a temporary trailer and locate it at the Marco Utility Complex immediately adjacent to the old Station 51, until a final plan can be crafted for the replacement of that structure.

“Council saw the rationale in maintaining our improved response times and gave the ok to acquire the temporary quarters and the personnel are now running out of that facility,” said Chief Mike Murphy. “In the meantime, we will continue to work with council for a final solution,” continued Murphy.