Teeing Up for MIA 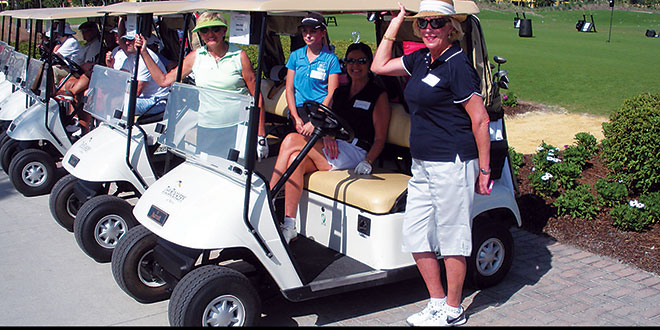 Fun, fundraising and a dash of golf’s storied past were much in evidence during The Squire’s 2014 Hickory Challenge on Saturday, Nov. 15.

Held Saturday at The Rookery in Fiddler’s Creek, the annual event raised about $10,000 for Marco Island Academy and First Tee, Naples-Collier, a program that fosters character building in youth through the game of golf. The tournament’s name is inspired by the late Gene Sarazen, a Marco Island resident and legendary professional golfer whose nickname was “the Squire.”

The challenge features play with the hickory shaft clubs that were common during the 1920s and 1930s, when Sarazen, Bobby Jones and Walter Hagen ruled the links. Players using modern steel-shaft clubs also take 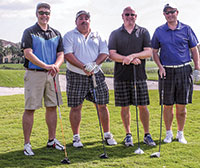 part in the event, which is the brainchild of Marco resident Terry McCreanor.

Based on the mild temperatures and abundant sunshine, it was as if the ol’ Squire was smiling down on Saturday’s proceedings and the 61 golfers who tried their hand on the 18-hole, more than 7,100 yard, 72-par course.

“We’re very pleased,” Tina Nash, MIA’s director of development, said while play was underway. “We had a great turnout.”

This was MIA’s second year as a challenge beneficiary. Jane Watt, MIA’s founder and chairman of its board of directors, said about $7,000 was raised last year, although the event is also intended to heighten the visibility of both the school and First Tee.

Participants await the start of The Squire’s 2014 Hickory Challenge, held at The Rookery in Fiddler’s Creek golf course.

MIA will apply the funds it receives to its operating expenses. Watt said Florida’s charter schools receive less money from the state than traditional public schools, so fundraising is key. “Not only do we receive less funding, but we also have to return 5 percent (of their annual state funding) back to the district,” she added. “So, we always have a budget shortfall.”

Watt said MIA must raise about $750,000 throughout the year for operating expenses and an expansion that’s planned for next spring. The school’s board wants to add two new portable classrooms before the start

It was McCreanor who brought MIA and the tournament together. “I have a couple grandkids in the school, and I’ve tried to help them out; and the golf tournament seems to help them out,” he said. “It’s a nice marriage. It really is. It’s just a nice time.”

McCreanor said his interest in hickory clubs began when his parents bought him a set in the 1950s when he was 10 years old, not knowing that steel shafts had become the new standard. That interest continued into adulthood, and he now has about 25 sets of hickory clubs, many of them used during the challenge.

Tournaments featuring hickory clubs, which perform differently than their 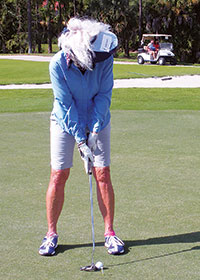 steel-constructed cousins, are held worldwide, said McCreanor. “My deal is I want the kids to experience playing with hickory shafted golf clubs,” he added.

Wes and Karen Blackwell have participated in the challenge since it began seven years ago. “It’s a fun event,” said Wes. “It’s certainly a challenge playing with those (hickory)

sticks, but it’s all for a good cause to support First Tee and the Marco (Island) Academy.”

Making her Hickory Challenge debut was Laverne Davy of Marco, a retired school superintendent in the Chicago area.

“Having been an educator, the cause of supporting Marco Island Academy was definitely something I was interested in doing,” she said. “I really enjoyed my career, and the MIA is just a wonderful school; and the kids do so well. That really tells you a lot about the educational program and the support of the parents.”

1st Place for steel clubs with a 62 are: