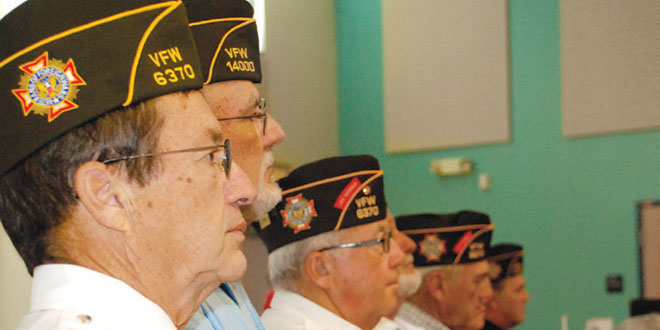 Local veterans were moved by the program.PHOTOS BY NOELLE H. LOWERY

The faculty, staff and students of Tommie Barfield Elementary School raised the flag and their voices in salute to Marco Island veterans in the school’s annual Veterans Day program. Veterans from all branches of the armed forces — Army, Navy, Air Force, Marines and Coast Guard — and their families attended. Veterans of every major conflict since World War II were represented, including one veteran who was involved in the Cuban Missile Crisis.

The ceremony opened with the presentation of colors by the Lely High School Junior ROTC and the Pledge of Allegiance. Under the direction of TBE Music Teacher Lisa Braren, the fifth grade class then serenaded the veterans and audience members with a number of patriotic tunes, including “My Country Tis of 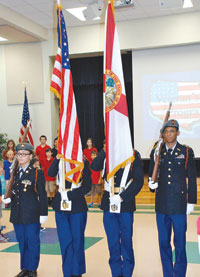 Thee,” “God Bless America” and a military medley that incorporated all of the traditional songs of the armed forces. TBE Principal Dr. Jory Westberry and Assistant Principal Katie Maya passed the microphones around, allowing all veterans in attendance to stand and introduce themselves.

Throughout the program, students told the significant story of November 11 and Veterans Day. According to History.com, it began on the 11th hour of the 11th day of the 11th month of 1918 with declaration of an armistice between the Allied nations and Germany to end World War I. President Woodrow Wilson declared the day — Nov. 11, 1918 — Armistice Day, and it was first celebrated in 1919 with parades and a two-minute pause in the daily business activities across the country at 11 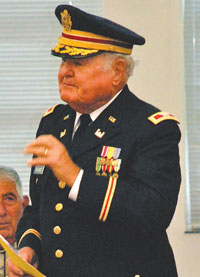 Veteran Herb Savage dedicated an encore performance of ‘God Bless America’ to the students of TBE.

Two years later on Nov. 11, 1921, an unidentified American soldier from World War I was laid to rest in Arlington National Cemetery near Washington, D.C. This place in now known as the Tomb of the Unknown Solider. At the same time, the date was declared a legal federal holiday to honor all soldiers who fought in the Great War. Armistice Day became Veterans Day in 1954 when President Dwight D. Eisenhower signed legislations proclaiming November 11 to be a day to honor all American veterans.

After the students concluded their program with a moving rendition of “God Bless the USA,” they received a surprise from Veteran Herb Savage who led the audience in a special encore of “God Bless America.” This time, said Savage, “we will sing it for the children.”