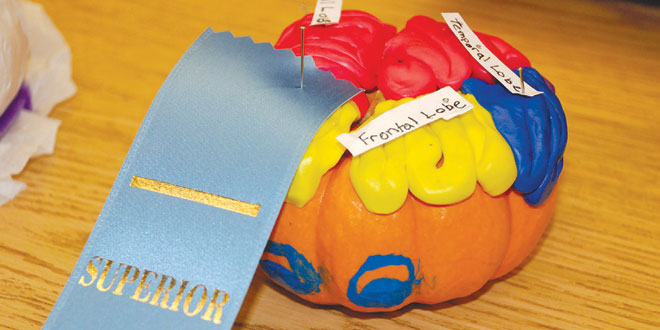 The pumpkin does not grow far from the vine in the Poling family. Fifth-grader Ellie Poling used her pumpkin to depict the different lobes of the brain to win a Superior award.

Kittens and super heroes and monsters, oh my! All were on display last month in Tommie Barfield Elementary School’s media center, as the school conducted its annual pumpkin decorating contest. Close to 100 students from all six grades — kindergarten to fifth — participated in the contest. Some students purchased miniature pumpkins from the school, while others brought one from home. All of them designed and created wonderfully imaginative — and some even elaborate — decorations for their pumpkins. The kids transformed the pumpkins into all manner of cartoon characters, animals, fish and planetary objects. One second-grade student used his pumpkin to conduct electricity and light a small bulb. Just take a peak at some of the winners.