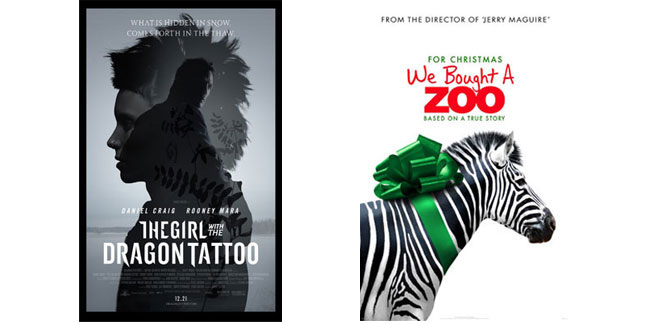 The Girl with the Dragon Tattoo

Rooney Mara is mesmerizing as Lisbeth Salander, the tiny birdlike product of the Digital Age. She’s tattooed, pierced in all the wrong places, fierce, anti-social, abused, and sheathed in black leather and even wearing “Oliver Twist” gloves with the fingers cut out. Lisbeth is a genius computer hack. She joins forces with Mikael Blomqvist (ably played by Daniel Craig) a journalist who is on the wrong end of a very expensive libel suit. Ms. Mara’s performance is truly remarkable.

The film is shot in cold, desolate Sweden where snow is punctuated from time-to-time by rain or sleet. Much of the action takes place on an isolated private island owned by the very wealthy and very despicable Vanger clan, who range from corporate parasites to exiles to outright criminals and Nazis. The one possibly upright family member is old Henrik Vanger (portrayed by the inimitable Christopher Plummer) who hires Blomqvist to look into an apparent crime committed decades ago. In the course of pursuing leads Blomqvist is introduced to Salander, and the two work together to solve the puzzle. The issue is the mysterious disappearance and presumed murder of Henrik’s niece, Harriet. In order to find the answer Blomqvist must interact, as best he can, with the very nasty Vangers, most of whom do not even talk to one another.

From scene to scene Salander, abetted by Blomqvist and an aging detective, flits across the screen – often on a high speed motorcycle – and skillfully hacks into computers to arrange the puzzle pieces. In the course of all this her past as an abused young girl slowly develops, and explains her behavior.

The soundtrack, while not disconcerting, enhances the gloom and punctuates the excitement. The photography is superb as it captures the overriding gloom of the island and Sweden in winter. For the queasy, be aware that the film is violent and has a full range of explicit sexual content. It’s not to titillate, but rather to illustrate the gruesome nature of the segment of society and the plain rotten core of the Vangers.

Director David Fincher ably transitions from the early disgrace of Blomqvist to the search for the truth and to the brutal aftermath. Ultimately the film belongs to Ms. Mara in a startling and compelling portrayal of the troubled and vengeful Lisbeth Salander. It’s a portrait that lingers long after the credits disappear.

We Bought A ZOO

“We Bought a Zoo” is the ultimate feel good movie. It’s based on a true story that actually took place in Devon, England. Cameron Crowe, noted for directing “Jerry Maguire”, “Almost Famous”, and several other hit movies, decided to try his hand at family entertainment.

Benjamin Mee (Matt Damon in a much different role than usual for him) is desolate after his wife’s death. He has two kids; a precocious young daughter and a surly teenage son. Adrift, Mee looks to change the direction of his life, and winds up buying a dilapidated house close to Los Angeles, with (Surprise!) a dilapidated zoo. The wee daughter is entranced; the son is estranged. Aided and abetted by a zoo staff that wants to save the zoo, Benjamin strives to restore it. He, of course (this is Hollywood after all) meets and surmounts all hurdles, including a real financial pickle. Even his dubious accountant brother is ultimately won over.

The interaction between Damon, Scarlett Johansson (as a good looking zoo keeper), Patrick Fugit as a worker with a real monkey on his back, a mostly drunk enclosure expert (Angus MacFayden) and very friendly animals, including a grizzly bear that escapes briefly, is fine. Nothing gets very exciting or is terribly suspenseful. Young son Dylan (Colin Ford) is enchanted by a young zoo apprentice (Elle Fanning) who works diligently to get Dylan out of his funk. Daughter Rosie (Maggie Elizabeth Jones) is a cute little scene stealer, and John Michael Higgins is mildly threatening as a government inspector who may – or may not – close down the zoo.

The film’s main crisis revolves around son Dylan who spends his time drawing violent scenes and blaming his father for mom’s death and the aftermath. Dylan does not like leaving urban Los Angeles for the woodsy life and adorable animals. Dylan’s struggles with adolescence and his mom’s death represent the most serious underpinnings of the movie. For those who care, in real life Benjamin’s wife died after they bought the zoo, not before. The zoo is in England.

The musical score has snippets of Randy Newman, Neil Young and Tom Petty, and enlivens the script. Crowe directs with a light touch, apparently geared for a young audience. There are some amusing scenes and Matt Damon is captivating as usual.