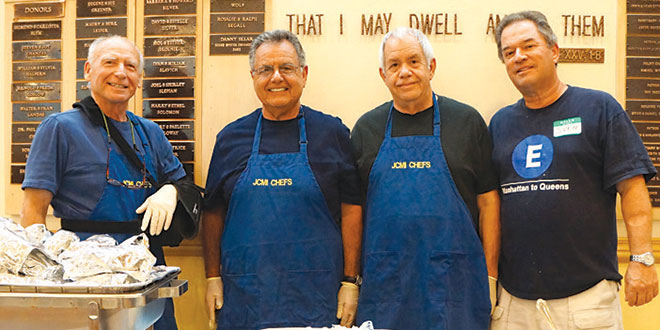 Prior to Shabbat services and Tarik’s speech, sixty guests noshed and kibitzed in the social hall.

Guests enjoyed the feast of pastrami and corned beef sandwiches on rye, with all the traditional accompaniments you would find at a real New York City deli. JCMI chefs Bernie Seidman, Bert Thompson, George Karpman and Don Schwartz prepared for the event for two days. They showed their culinary skills with fresh homemade coleslaw, potato salad and pasta salad to accompany the deli sandwiches.

The deli meat for this event was from a new source, which 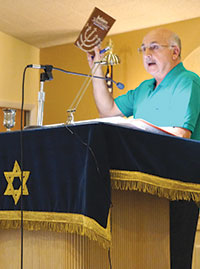 JCMI guest speaker Tarik Ayasun holds up the book Judaism: An Eternal Covenant, written by his friend, the late RabbiGreenstein, who dedicated it to him.

try as I might, I could not get any of the four chefs to divulge. The brand of meat, which was leaner than prior brands, will be the same type used at the annual JCMI Deli Feast, which usually takes place in January to a sold-out crowd.

The guests came for more than pastrami. Everyone we spoke to was also there to hear guest speaker Tarik Ayasun. Tarik is a well-known Marco Island resident and international businessman, who also writes the popular column Beyond the Coast for Coastal Breeze News.

Tarik has strong ties to the Jewish community, Israel and the JCMI. He spoke of his friendship with Rabbi Greenstein, who passed away in 2006. For 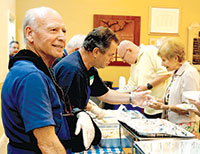 Tarik, who is Muslim, was born in Turkey. As a boy his parents sent him to Israel where he lived on a kibbutz at the foot of the Golan Heights. He said the experience changed him. There he learned “humanity, humility and the love of Israel.”

He has a passion for Middle East politics, which is only fueled by his opportunity to discuss these issues with people from all over the globe. It provides Tarik with a unique insight that most of us do not have.

Tarik’s talk focused on the 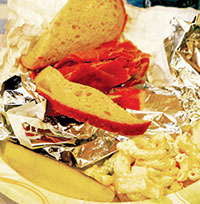 Iran nuclear agreement and how it is of grave concern to the Jewish community, Israel and the world. Telling us that he has concluded from his many discussions that “Israelis and most Middle Easterners do not believe the promise of a moderate Iran.” Tarik voiced concern for the safety and security of Israel. This fear is not limited to Israel; it is shared by many Middle East countries. Questions from the congregation reflected this concern for Israel, fearing that the country will become “collateral damage” to the agreement.

The Jewish Congregation of Marco Island is located at 991 Winterberry Drive, Marco Island. For more information about events at the JCMI and membership, go to their website at www.marcojcmi.com or call 239-642-0800.