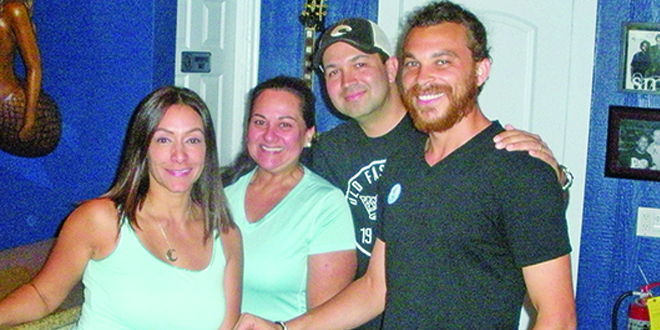 For Marcoites, answering in the affirmative to that question likely meant a drive off-island to enjoy the Spanish dining style. That is until last September’s opening of Mermaid Blues, located in The Collection at Olde Marco.

Tapas are the assortment of appetizers in traditional Spanish cuisine that has evolved into a sophisticated style of cuisine in Europe. It’s also the specialty at Mermaid Blues, which is owned by the husband and wife duo of Amaury and Vinnie Garcia.

Mermaid Blues is a small bistro with largely outdoor seating that features live music, beer and wine, flatbreads, a kid’s menu, tapas and entrees that have a true international flair.

Traditional Spanish Tapas was a jumping-off point in creating the menu, which is the domain of Amaury, the cook in the family and Mermaid Blues’ head chef.

“The first month was all trial and error,” said Vinnie. “He tried a bunch of different things. It started as more of Spanish tapas, because of our love for smaller, appetizer-sized bites where you don’t have to have a huge meal. You can have a glass of wine and enjoy something small.

“It’s evolved into something more international,” she added. “Now we offer a Cuban sandwich, we offer an arepa, which is a very traditional Venezuelan corn pattie (filled with pork or shredded beef).”

Vinnie said the Cuban sandwich and the arepa are their biggest sellers on most nights.

“People are enjoying the food and the flavors,” she said. “So it’s not what you would call a traditional Spanish tapas place. It’s more international cuisine, just a very good fusion of flavors.”

The Garcias also takes pride in their selection of internationally sourced wines from Spain, Portugal, France and locales.

Mermaid Blues’ menu includes such traditional tapas delectables as the charcuterie and cheese platter, which is a mix of manchego, goat and iberico cheeses, Spanish and kalamata olives, prosciutto, serrano ham, bacon, sundried tomatoes, crackers, and a mango-pineapple tequila jam.

Diners can also enjoy such nontraditional tapas selections as mini crabcakes, the bacon-wrapped beef and blue cheese meatball or the Greek, which is prosciutto, kalamata olives and feta cheese.

There is also an assortment of flatbreads, including gluten-free and meatless options. Aside from the Cuban, the entrées also include another sandwich, the Chori-Pan, which is a Spanish chorizo sausage sandwich, as well as pork sliders, arepas, tacos and burritos.

First-time business owners, the Garcias are Marco residents who first met in Miami, where both worked in the pharmaceutical industry. Vinnie still works in the field, but Amaury’s career was interrupted last March, when his job was part of a major national layoff.

That displacement led the couple to decide to pursue a long-held dream of Amaury’s, to open a restaurant.

“I’ve always been passionate about food,” he said. “I’ve always been the cook in my family. We’ve traveled a lot and I’ve incorporated different things into the things that I make at home. It’s been a passion.”

An ideal spot for the venture was found within walking distance of their home, the former location of the now closed Joe’s Hideout, where the Garcia’s were occasional customers.

“We just knew the location was perfect for what we wanted to do, between making it a small restaurant with really good food and better wines than what they offered before,” said Vinnie. “We decided that it’s such a special place, a special little courtyard, a small restaurant, we decided that if we were going to own something for the first time, this was just perfect in terms of size.”

As the name implies, live music is an important part of the Mermaid Blues formula. The restaurant is open six days a week, with performances every evening. The lineup includes such artists as Ferguson and Rogers, Billy J and the Big Easy, Havy Rodriguez, the Edith Diamond Band, the Hot Damn Duo and the Hipnauticals. There are also open mic nights.

“Living on the island, we always look for live music, even if it’s something in the background,” said Vinnie. “Not something loud, but live music that you’d enjoy with a glass of wine. We wanted to incorporate that into our restaurant because we think it’s part of the enjoyment. We have a variety of music for the people who come and enjoy the food here.”

The Garcias credit the customer service skills of head bartender Jahdea Gildin with being integral to the eatery’s success thus far.

“The front of the house is the most important because the food has to be awesome, but if you have a bad experience, if you come here and nobody looks at you or gives you a menu, you are going to have a terrible experience even if the food is amazing,” said Vinnie. “He brings with him a lot of experience in bartending and catering and just overall, his demeanor as a genuine person has been instrumental for us.”

The Garcias have lived many places. He was born in Venezuela and raised in Miami. She is from San Juan, Puerto Rico, but has resided in the U.S. to attend college. They both traveled extensively for their jobs which saw them based in Miami, Chicago and Mexico City. But Marco Island is where they’ve chose to put down roots.

“We love Marco,” said Vinnie. “For us, we are at home here and we are so happy. Our kids (Luca, 8, and Ana Luna, 7) go to Tommie Barfield and it’s where we want them to grow up, on an island like this, that’s calm and peaceful.”

Mermaid Blues is located at 172 Royal Palm Drive. The restaurant is open from 12 PM to 9 PM, Tuesday through Saturday, and from 4 PM to 9 PM on Sunday. For more information, including the menu and entertainment schedule, visit Mermaidblues.com.