Tamiami Trail: The Name Was Easy, The Rest… Not So Much 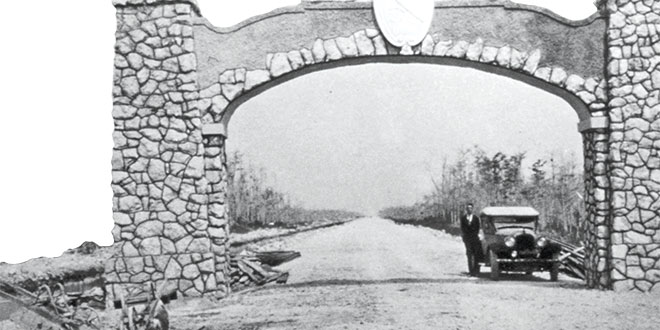 Let’s get one thing out of the way right from the start. The Tamiami Trail is so named because it connects Miami and Tampa Bay. But the name was the easy part. The rest was a grueling process that spanned eleven years.

On April 21st, Park Ranger Bob DeGross, Big Cypress National Preserve, Chief of Interpretation and Public Affairs, gave a presentation at the Rose History Auditorium called “A Road Runs Through It”. In it, he chronicles the process of completing this enormous project.

Key West was the largest city in Florida when the Tamiami Trail was first proposed. Boats were the main method of transportation with no way to get easily from the gulf coast to the Atlantic coast through central Florida. It was a vast frontier of wetlands where very few ventured far from the coastal areas.

With the introduction of mass produced automobiles, people began looking for more places to drive them. In 1915, the Good 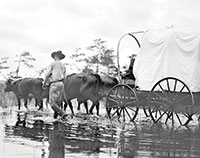 Before the Tamiami Trail, ox cart was a main mode of transportation in Southern Florida. Even horses were ill-equipped to handle the terrain.

Roads Convention was held in Orlando. It was decided that there should be a road that traversed the everglades south of Lake Okeechobee. Thus the Tamiami Trail project was born.

Captain James Jaudon, a businessman from Miami, was a major proponent for the project and sent out surveyors from the Miami area. It was slow going and they were only able to survey about one mile every day.

Back north, the road construction from Tampa Bay to Fort Myers was relatively easy and went quickly. South of Fort Myers however, there was the everglades and this would take some time, money and human fortitude. All of which were vastly underestimated in the beginning.

In 1916, a bond was issued for $250,000.It was thought this would cover the entire cost of construction. A contract was given to a Georgia company to do the work. Three years later, they had completed only 12 miles from Miami and ran out of money. Captain Jaudon 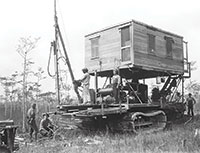 The travelling dynamite rig was used to drill holes then blast limestone for constructing the road.

became involved once again and his company, the Chevelier Corporation, restarted the construction in 1923.

On the Fort Myers side, Barron Collier, advertising mogul, got involved. His vision and resources were a huge asset to the project. The work went quickly from Fort Myers to Everglade City. Special equipment was brought in and, with the help of 4,200 tons of dynamite, the Tamiami Trail was once again on the road to completion. Collier decided to by-pass the original route to connect with the Chevelier Corporation coming from Miami. Because of this, we now have what is known as The Loop Road, or South Loop of Tamiami Trail.

On a side note, we can thank Barron Collier for coming up with the idea of lane markings; yellow for the centerline and the white fog side lines.

Eleven years and $7 million later, The Tamiami Trail was officially opened April 26-28, 1928 at a ceremony in Everglade City. Coincidentally, this was also the 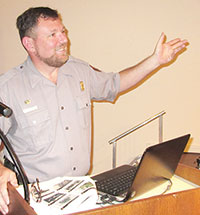 date of the first car accident on the road. It was a long road and many people fell asleep at the wheel. There was a great deal of fanfare at the celebration. What the Beatles did for music, the Tamiami Trail did for growth and commerce in Florida. The rest, as they say, is history.

“He (Ranger Bob Degross) did a wonderful job,” said attendee Joan Connell after the presentation. “There was so much information and he did a great job telling the story. He really put some time into this.”

There are great many other details regarding this adventure. Far too many to explore in this article. On-line resources are numerous and can help to help fill in the gaps. A trip to the Collier County Historical Museum would also be a great idea. It’s a wonderful story and a great part of Florida heritage.

This lecture was part of The Way We Worked exhibition in conjunction with the Smithsonian Institute and Florida Humanities Council.