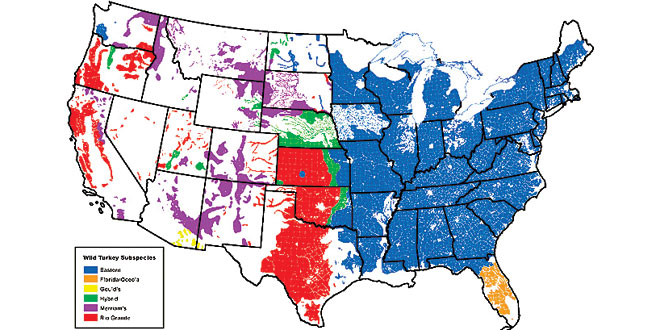 The day after the third Thursday of November every year, many of us who celebrate Thanksgiving look forward to eating leftovers that include tasty turkey sandwiches. Many find this the best part of the holiday! Unless an avid sportsman is in your family, the turkey that filled your home with the heartwarming aroma while roasting all morning, came from a commercial turkey farm. As we sit down with family and friends, giving thanks for all the gifts in our lives, there are about seven million wild turkeys in the United States giving thanks that they are still roaming around in the woodlands.

Almost the national symbol, there are five subspecies of wild turkeys in the United States: Eastern, Osceola, Rio Grande, Merriams and Goulds turkeys. The populations are sustainable due to management programs that brought a 700,000 population in the 1930’s up to a 7 million population today. 5.1 to 5.3 million of all these subspecies of turkeys are the Eastern Turkey, whose range covers most of the eastern United States, stretching into the Midwest. The Eastern turkey population is also found south into the panhandle and northern Florida counties.

Florida is the only state that has its own unique species of turkey. The Florida Turkey, well known as the Osceola Turkey (Meleagris gallopavo oseola), is found here in Florida. This beautiful, wild turkey was named by W.E.D Scott in 1890 for the famous Seminole Chief Osceola. It is estimated there are about 80,000 to 100,000 in the population.

It was skipped over for the national symbol, but Collier County chose the Osceola Turkey as the perfect symbol for the County seal on July 9, 1923 at its very first board meeting. They chose this magnificent native bird due to the abundance, its beauty and how early settlers depended on it as a food source. While it is not found on Marco Island, in can be found inland in Collier County. Look for these large birds in 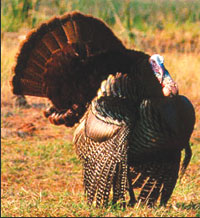 open fields near woodlands or in unused farm fields. The Falling Waters community, on the corner of State Road 41 and County Road 951, has had frequent sightings of turkeys trotting on their trails.

Turkeys are the largest of all game birds in the United States and have many unique characteristics and body appendages with unique names. Males, known as gobblers, generally weigh 16 to 27 pounds with the largest documented at 37 pounds.

Females, known as hens, are smaller, averaging eight to ten pounds. Wild turkeys have 5,000 to 6,000 feathers that cover their bodies in tracks. The males are always more colorful than females. Males can have multicolored feathers, and even iridescent shades are found in the Osceola. They use the colors to attract mates, show dominance and warn predators, especially when their large tail is fanned out in an almost complete circle. A juvenile male, a “jake,” will not have a complete tail circle. An adult male, a “torn,” will have the full circle of tail feathers.

The drab, mostly brown hens do not have the showy tail feathers and can easily hide in the vegetation and be camouflaged while sitting on eggs or hiding her brood. They have featherless necks and heads, as do the males.

During mating season, the males’ head color can be red, white or blue and changes instantly. Modified feathers that are tufts of filaments grow from the chest area, and on the males will grow to an average length of ten inches. This growth is referred to as the turkey’s beard. 10 to 20 percent of the females have beards, but much shorter – typically two or three inches in length. The longest beard on a male recorded was 18 inches.

Nubs found on all newly hatched turkeys are found on the legs but in a few weeks they disappear on the hens and continue to grow on the gobblers’ stout and strong legs. These spurs are used for fighting and dominance display. Both 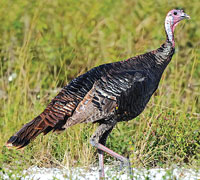 sexes also have carbuncles and snoods. A carbuncle is a fleshy growth on top of their head. The snood gets long enough to hang over the side of the bill. The gobblers’ snood gets quite long, and it can be inflated and flexed.

Florida has the perfect and plentiful habitat for Osceola turkeys. They need open, well vegetated areas to feed during the day and forests with trees to roost at night. This varied habitat is essential to provide food and cover for their survival. They are found in the piney flatwoods, oak and palmetto forests and in and near cypress swamps. They feed on seeds, grasses, insects and small vertebrates found in the fields.

Courtship, mating and nesting occurs as early as January and completed by May. The female will nest on the ground, in vegetative cover, using a shallow dirt depression as a nest. 10 to 12 eggs will be deposited over two weeks, typically one egg a day. The female will incubate the eggs for approximately 28 days, turning them all the while and making sounds to them. Within 24 hours of hatching, the hen will “imprint” the newly hatched turkey, called a poult. This imprinting is vitally important for survival to her brood (group of poults). The poult must recognize the different calls and sounds of the hen for safety. Only half the poults will survive to adulthood due to the many predators sharing their habitat. Rats, snakes, raccoons, foxes, owls and hawks are all hunters of both the eggs and young poults. A call or gobble from the hen can lead the poults to cover as they grow and mature in the open fields and woods.

Enjoy your leftovers and turkey sandwiches! Maybe pack them up for a picnic and take a hike – you may come across a magnificent Osceola Turkey!