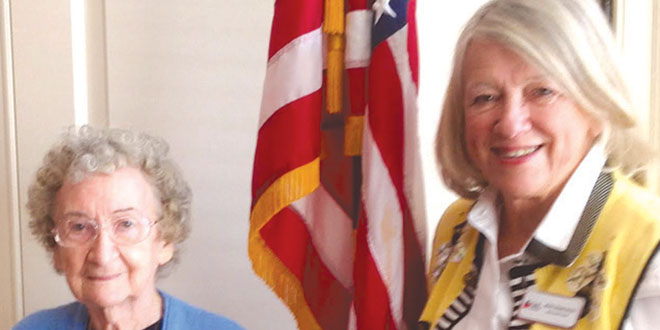 Lt. Alyce Kobzina (Army Ret.) told the DAR members about her assignment as a nurse in a MASH unit on the front lines in the Korean War.

The Marco Island Chapter of the Daughters of the American Revolution honored a veteran member and welcomed a newcomer to the group at its first meeting of the season, November 20 at Hideaway Beach Club.

Jean Boucher received a certificate noting her thirty years with DAR on Marco and Cindy Anderson was recognized as a new member.

Then the members listened intently to the war stories of Lt. Alyce Kobzina (Ret.). She was an army nurse during WWII and then assigned to a MASH (mobile army surgical hospital) unit like the one depicted in the famous TV series, set in Korea. She wasn’t like the character, Hot Lips Houlihan, as played by Loretta Switt, but she had some funny and fearful stories to tell.

Alyce, from Pawtucket, Rhode Island, made notes about her tenure in the war. For example:

April 12, 1951: “Just had to take a break from writing as had to turn lights off so an e-ray could be taken. Funniest things happen here. Took 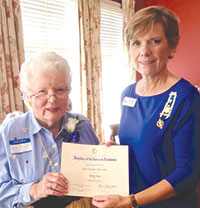 a bath out of my helmet today.”

April 8, 1951: “Well, at last I’ve reached my unit. It took me exactly a week from the time I left Tokyo till I arrived here about 1500 yesterday. Our unit at present is 42 miles northeast of Seoul….we are following the 24th and 25th and First Cavalry Divisions, so where they go, we go. We go within 3-5 miles of the fighting front and stay until the troops advance (hopefully) and then we move with them.

“I can tell you right now, with the very little I have seen, that our air force didn’t miss much. All railroads knocked out, also bridges; houses leveled or heavily damaged”.

April 10, 1951: “When soldiers are wounded, they generally come by ambulance unless they have a belly or head wound and then they helicopters try to get them. We are not near a railroad or an airstrip so without the choppers, many lives would be lost.” 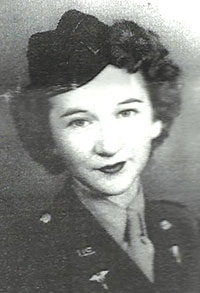 All this talk of peace sounds good, but it hasn’t stopped any of the fighting. We admitted 54 patients and sent 43 to the operating room. For 3 days and 3 nights our troops have been trying to take one hill. They had it once, but the Chinese recaptured it.”

The DAR applauded and appreciated the wartime service of Alyce Kobzina, one of the many millions of Americans, since the Revolutionary War, who have fought for freedom.

The Marco Island Chapter of the Daughters of the American Revolution holds its monthly luncheon meetings at 10:30 AM on the third Thursday of each month, except in June, July, August and September.

They welcome potential and members from other chapters who are living in or visiting the area.