Taking “No” for an Answer 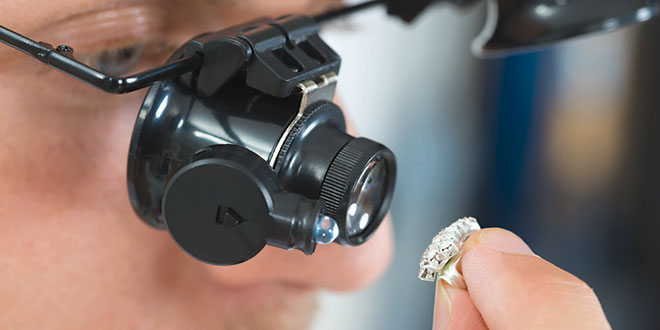 I recently had a not-so-unusual discussion with a potential customer, regarding the time process for her ring to be totally restored. Now to most of us business folks this is considered high season, and in our goldsmith shop my son and I are straight out with the influx of custom and repair work, resulting in the burning of lots of midnight oil. The volume is kind of like drinking from a fire hose.

We take in, on an average day, anywhere from fifty to seventy watches for various reasons, such as battery replacement, straps, adjustments, repairs – you name it, not to mention the occasional eyeglass repair requiring the use of my expensive state-of-the-art laser welder. And that’s not counting the incoming jewelry repairs. I’m not complaining, but it is a lot to contend with all at once.

Needless to say, we pretty much start the morning with a full plate, so to speak. So early one morning, while at my busy workbench, I hear a commotion in the showroom where a customer is loudly demanding that she “refuses to take no for an answer!” I got up from my bench to find out what the ruckus was all about.

Apparently, the customer’s diamond ring was in need of major restoration. Prongs and diamonds were missing, the ring was cracked and even missing sections, and add a century of wear and tear…in a nutshell, the ring was shot to Hades. It required days of work to bring the ring back to life. In my estimation, between diamonds needing replacement and labor alone, at least a thousand dollars or more to complete. She agreed to that. Only one problem…she wants it now! And I have to do it while she waits!

I explained that it is impossible to do it now, the Ken and Barbie instant magic jewelry workshop is in for repair. (Needless to say she failed to appreciate my attempt at humor.) Her release valve must have popped, she went up one side of me and down the other, that I will do what she says and that I should stop wasting time and get busy on her ring! Besides the fact that this type of repair is more of an art form requiring not just time, but it is also very meticulous, requiring skill and expertise. A job I would do at night, in peace and quiet. I simply don’t rush anything; nothing good comes from a rushed repair.

She doesn’t know me so well, does she? There was no reasoning with this person. She ranted, “I want it done and I want it now!” She carried on like a spoiled five-year-old. It was embarrassing to witness. After I rolled up my descending jaw, I noticed the looks on the faces of the other customers, and that said it all.

It’s time for the “bum’s rush,” meaning I hand her back her ring, tear up the work envelope and escort her to the door.

The same thing happens with watches, only not so dramatic. Most folks understand; they leave the watch, pick it up a couple of hours later (or even better, the next day). I think it has to do with some study done on people’s personalities, types A, B, C or D, or some nonsense having to do with passive aggressive behavior or passive and non-compliant personalities. And boy do I get them all! “Oh you can’t change my ten watch batteries while I wait?” I know of several jewelers that take up to a week to perform a battery change for a customer’s watch, and they are still in business, so me asking to “please give us a couple of hours” is not horribly inconvenient for most people.

Unless they are a type “J” personality (First letter to the word J-E-R-K). “Oh, I have to leave it?” One person told me to give it back, they will bring it to Naples where they do it right away. Must be nice to have that kind of time on one’s hands. Did she figure the gas used?

Forgive me, I don’t jump off my bench like a demented jack-in-the-box every time someone walks in with a watch battery and wants it…NOW. No “ifs, ands, or buts.”

In the slow summer months my son and I don’t mind doing them while folks wait, because we have the time. We just can’t accommodate everyone here and now in season.

As I write this story from my office, I overheard a customer insisting to one of my sales persons I personally told her I would repair her dentures? No, I never did and no we don’t. I made a deal with the local dentists – they don’t sell diamonds, so I lay off the denture repairs.

Ask anyone who is a patron here, my staff (and especially my son) will bend over backwards to accommodate “nice people,” and especially our V.I.P. customers.

Then there are the ones who are just impossible, in fact, rude. One of my friends, who works at a local restaurant, was subjected to a patron who demanded her immediate attention every time he snapped his fingers. If I were in her shoes, and he snapped his fingers at me, you can bet his clam chowder would make an “accidental” three-point landing in his lap! “My apologies…would you like oyster crackers with that?”

So please, during our busy season, remember patience is a virtue, be kind and understanding to the island’s business community, and especially your local goldsmith. Besides, what’s your hurry anyway?

While I am on the subject of “No,” I may be kicking a political bee’s nest but here it goes anyway… Here’s my personal comment on the city putting the kabash on the Island Plaza improvements. Congratulations to the powers that be that dragged out and complicated that project, it would have greatly improved the look of an out dated mall and increase business for all its tenants. Proof, once again the island’s small businesses suffer to bureaucratic red tape nonsense that anyone who wants to start a business here has to endure. Shame on those responsible! Who wouldn’t want a better looking mall? The mall owner lost over $100,000 on multiple plans and legal issues. Yet one of the saboteurs had the gall to demand payment for the cost of their own reels of red tape they created on the project! Amazing but not surprising.

Now we will see how long it will take to acquire permits to slap on some paint and patch holes in the crowded unsafe parking lot? Ironically due to my past experiences, I knew this project was doomed from the start. There are always two sides to a story, and I may not have all the facts straight. But I fail to see what harm the project would have caused the island.

Richard Alan is a designer/goldsmith and business owner of the Harbor Goldsmith who hopes he will not be tarred and feathered then burned at the stake by “the powers that be” in Veterans Park anytime soon. He welcomes (until his public demise) any questions you might have about “All That Glitters.” 239-394-9275, www.harborgoldsmith.com.