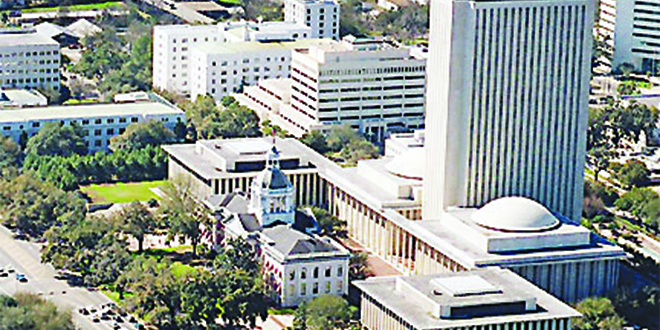 Submitted Photo | Florida’s Capitol Complex: The historic Capitol is in front of the executive tower to the east. The tower is flanked by the domed House and Senate chambers to its north and south. The Senate building is to the left of the tower.

Jane Watt, the founder and chair of Marco Island Academy (MIA), spends her days (and most nights) fighting – “Fighting for Kids,” as her recent book was entitled. Her book chronicles the battle to establish a local high school on the island. Against great odds, she succeeded in doing this, and MIA opened its doors in 2011.

The Florida Department of Education has since designated MIA as a “High Performing Charter High School.” MIA graduates attend some of the most prestigious universities in the country. Its top flight STEM (Science, Technology, Engineering, and Math) curriculum has not gone unnoticed by these elite schools. Unfortunately, the infrastructure of the school has not kept pace. Public money covers only a fraction of this cost. Much of the financing has to come from private sources. “Our board spends 90% of its time raising money to simply sustain the school,” Watt says, “We would much rather focus our energy on raising funds which will directly benefit the students.” Since the school’s inception, Watt and the MIA board have had to go out, hat in hand, in order pay for capital outlay expenses, not funded by the state. “On average, there is an annual funding gap of $525,000,” Watt says, “That money must come from private donors. We have had to raise nearly 3.5 million dollars from such donors in our community in order to survive.” This is getting more difficult every year. MIA is not the only worthy enterprise on the island which is seeking donations. “There is serious inequality in capital outlay funding between traditional schools and charter schools in the district.” Watt says, “MIA will receive approximately $264 per student in the 2016-2017 school year – about 1/7th the amount that traditional schools will receive.”

So what are these capital expenses that MIA must struggle with each year? There are a lot of them. Watt has put together some numbers for the bigger ticket items for the current year. She figures that the total expenses, just for the existing facilities 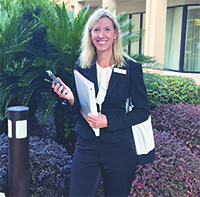 will be $2,303,000. Two million dollars of this is money owed for the land (5.8 acres) on which MIA sits. Two million dollars was borrowed in 2015 to purchase MIA’s campus. It had been leasing the land prior to that. The school is paying only interest on this mortgage for now, but it is a short term loan and the principal will come due in September 2019 unless it can be renegotiated.

MIA uses 14 modulars (or trailers, as some call them) for its classrooms. They own ten of these but must lease four of them at a cost of $37,000 per year. Next year, if they can’t find the money to buy these mods, the rent will increase by 20%. An invasion of roof eating buzzards caused extensive damage to the roofs of the mods and had to be repaired right away at a cost of $66,000. (See “Buzzards Take Big Bite Out of Budget” in the February 17th edition of Coastal Breeze News.)

Lastly, the decking of the entryway pavilion has to be replaced at an estimated cost of $200,000. “The decking area also serves as our cafeteria,” Watt says, “It is the only space big enough to assemble the students.” Exposed to the weather and the students’ constant foot traffic, this area must be replaced before it becomes a safety issue. Thus, the $2.3M in big capital costs for 2017. None of this takes into account the capital projects necessary to transform this group of “trailers” into a real brick and mortar school. The most ambitious and pressing of these are permanent classrooms and a gym on campus, which can also be used as an auditorium. The school has plans to mount a capital campaign to get this done. Watt says it will cost over eight million dollars. When it comes to “fighting for kids,” Watt has a lot more fight left in her. She also enjoys the full confidence and support of her board. 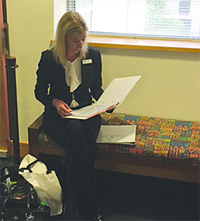 Photos by Marianne Iordanou | Watt reviews some of the extensive material she had prepared, while waiting her turn outside Senator Simmons’ subcommittee hearing room.

State Senator Garrett Richter (now retired). She has made sure that the Collier County School board is aware of the funding inequities and has become a de-facto spokesperson for charter schools in the district. She is a member of the Florida Consortium of Public Charter Schools (FCPCS) and has been honored by this organization as “an exceptional individual who represents the best aspects of the charter school movement.” Watt frequently speaks at fundraisers and galas on Marco, educating audiences on what MIA is trying to do here. She recently served as a panelist at the 2015 FCPCS Task Force meeting in Fort Lauderdale. District and charter representatives from across the entire state gathered to share ideas about how district and charter schools could better collaborate. In December 2015, Watt was named Citizen of the Year by the Marco Island Chamber of Commerce. It is no wonder that she was invited to participate in a February 8 panel discussion in front of State Senator David Simmons’ Education Budget Appropriations Subcommittee in Tallahassee. “I was told that there would be two separate discussions on fixed capital outlay,” Jane said, “One with school superintendents and one with charter school operators. I saw this as a great opportunity to make some inroads with the people who actually make the laws concerning school funding.”

And so, on February 8, accompanied to Tallahassee by MIA board member Marianne Iordanou, and after hours of preparation, Watt, along with other Florida leaders in education, got some time to make her case to Senator Simmons’ subcommittee. It wasn’t a lot of time, but having sat in on other Watt presentations, it must have been effective. “My testimony was cut short due to lack of time,” said Watt, “But I was able to make my two main points – the necessity of a recurring funding source for capital outlay and fair and equitable funding for charter schools as compared to traditional district schools. I would like to think I accomplished my mission.” She did manage to get in the 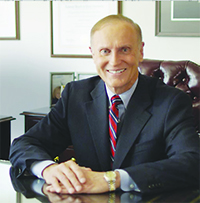 $66K in damages caused by the roof-eating buzzards, before the panel broke for lunch. “Everyone laughed at this, and Senator Simmons was incredulous,” Jane said. But others appearing before the panel were reported to have provided more unusual graphic examples of bad things happening to their buildings for which there was no money in their budgets for repair.

Less than two weeks later, on February 21, the senate appropriations subcommittee for K-12 education chaired by Senator David Simmons, approved SB 376, which, according to RedefinED, a Florida educational publication, “for the first time, would distribute local tax revenue evenly to [both] charter and traditional public schools.” Simmons was reported to have cited the testimony of the school leaders who visited his subcommittee a few weeks before. He also stated his “strong belief” that “we are in a crisis situation” regarding the funding for school buildings in Florida.

Following her testimony, Watt and Iordanou met with State Senator Kathleen Passidomo, who has represented Collier County both as representative and Senator since 2010. Watt was pleased with the meeting. “[Senator Passidomo] was warm and welcoming and listened to our input,” Watt said, “She seemed genuinely interested in the issues facing our school.” Passidomo has been very much aware of Watt’s efforts on behalf of charter school students. “Jane Watt is one of those educators that makes us all proud,” Passidomo said, “She is dedicated, hardworking and sincerely loves the students and faculty at Marco Island Academy. She works tirelessly to bring a quality education to the students of Marco Island Academy.”

SB 376 will have a rough road for passage by the full senate. A companion bill, which enables districts to raise taxes in order to adequately provide the needed funds, is stalled in committee. Raising taxes is never popular among legislators, particularly in the Republican controlled Florida legislature. But importantly, the battle has now been joined at the state level and support is growing there for charter school equality in funding. It is a safe bet that Jane Watt will be among those leading the charge.