Taking a Turn with Gulls and Terns 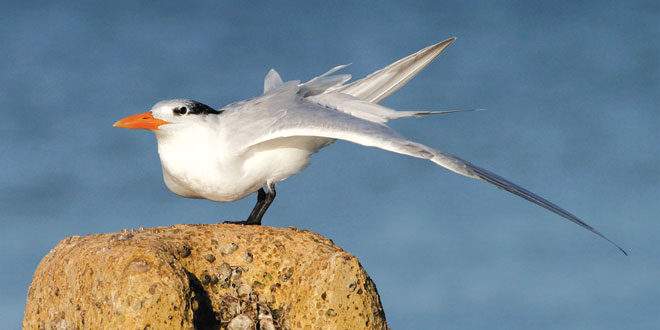 As you walk along the beach, you may think you are just seeing and hearing lots of “seagulls” on the Marco Island beach, but there are many diverse and unique species of gull-like birds on the beach. Take a closer look, and you may be surprised by the diversity of bird species using the beach to rest, feed and even nest.

Gulls, commonly known as “seagulls” (though many nest and breed inland), are a common beach bird on the Marco Island beach that we are all familiar with both visually and by sound. Gulls have large bodies and typically thick, curved bills. Many species take two to four years to reach full adult breeding plumage, so it is difficult to identify species as juveniles. Seen in large flocks, historically, they have been fed by beachgoers. If they have been fed, they will mob people and “beg” for food or bait, so many think this bird as a nuisance. Gulls do not need to be fed, though. They forage and scavenge in the tidal zone and are not a nuisance unless fed by people. They are part of a healthy beachside ecosystem.

Terns are very similar — at a glance — to “seagulls,” but are distinguished by a smaller head with crown feathers, pointier wing plumage, a pointed bill shape and most have a forked tail. Also, their feeding technique makes it easy to determine if it is a tern rather than a gull. Terns will plunge-dive into the water for their fishy meal. They are not as human-friendly as some of the common gulls, but do congregate in large flocks to rest. Some species

Gulls and terns together on the beach. PHOTO BY BEV ANDERSON

nest on the Marco Island beach. If disturbed, they will fly away.

It takes gulls two, three and some four years to reach full adult plumage. Prior to that plumage, it is difficult to identify juvenile species, unless looked at very carefully. Here are some quick identifying tips for gull species — IF they are in full adult plumage — on Marco Island’s beach:

• Laughing Gull: The black hood, or completely black head, is easily identifiable. The bright orange-red bill is not as stout as other gulls. The laughing call it makes is commonly heard on the beach or at a marina, and is one of a kind!

• Ring-billed Gull: This is one of the most common gulls seen on the beach in flocks, in pairs or single looking for handouts and always where food is plentiful. Look at the bill — a black ring encircles its yellow bill near the tip. Legs are yellow.

• Herring Gull: Also plentiful in numbers, this gull has pink legs and a large yellow bill. They are larger than a Ring-billed Gull.

Depending on the species, terns are here year round on the beaches. Here are some quick tips to help identify terns commonly seen along Marco Island’s beach:

• Caspian Tern: This is the largest tern on the beach (average length 21 inches, height 50 inches) with a black cap and a very thick, large coral-red bill that has a slight black or pigmented tip, and its tail is less forked, more like a “U” than a deep “V” shape in flight.

• Royal Tern: Close in size to a Caspian Tern (average length 20 inches/height 41 inches) with a distinctive

The smaller Sandwich Tern with yellow-tipped black bill with the largest tern species on Marco Island, the Caspian Tern. PHOTO BY BEVERLY ANDERSONL

• Sandwich Tern: Smaller, but the not the smallest (average length 15 inches and height 34 inches) of terns, this is one of the easiest to identify just by looking at the bill. The black bill is pointed and slender tipped in yellow — as if it dipped its bill in mustard of a “sandwich.” The tail is deeply forked but shorter than a Royal Tern.

• Least Tern: This is the smallest tern and most aggressive on the Marco Island beach. This tern nests in great numbers between April and August of each year. If you have ever been dive-bombed on the beach by a small gray-bodied bird with black cap, you have encountered a Least Tern protecting its well-camouflaged nest on the sandy beach. This is the only tern species that nests here on Marco Island’s beach.

Next time you take a beach walk and see gull-like birds along the shoreline or in larger resting flocks on the beach, take a closer look and see how many unique species of gulls and terns you can identify. The more number of diverse species that use the beach, the healthier the ecosystem is functioning.

Please always remember to give birds on the beach their space; walk around resting flocks, do not chase or feed. Keep our beach healthy and clean by removing all trash and food scraps when you leave the beach. Be a Beach Hero — help keep our beaches healthy and safe for people and wildlife!