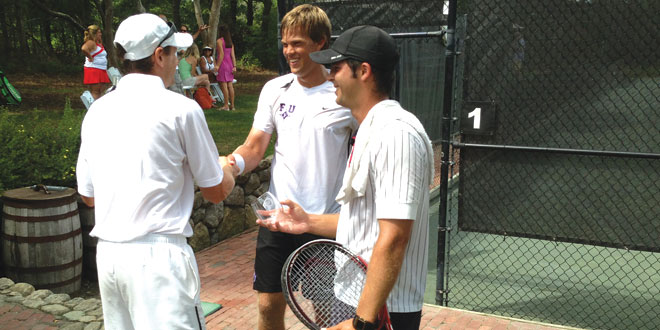 As I prepared to leave Marco Island for our summer on the Vineyard, I received a phone call from good friend, Scott Smith, former Floridian and currently a Vineyard Haven resident, who asked me if son, Matt, would be available for an exhibition match against former ATP Tour star, Ryler Deheart on July 25th.

Naturally, I said ‘yes’ and was excited for Matt as he would be excited about this big match which would motivate him for his upcoming Sophomore season at Furman University. Ryler Deheart, born in Hawaii but raised in Tampa, Florida was the number one collegiate tennis player at the University of Illinois. Incidentally, Deheart and his teammates won the 2003 NCAA team Championship during his tenure in the Big Ten Conference.

After his years on the Champaign-Urbana campus, Deheart played on the ATP Tour as his ranking reached an all-time high of 174. For one brief period, Ryler Deheart became a household name as he battled Rafa Nadal at the US Open on Arthur Ashe court; his unbelievable array of shots and his acrobatic play fired up the crowd as the third set was even throughout.

Today, he is top assistant men’s coach at the University of Alabama and has been able to keep his game sharp as he practices with the Crimson Tide tennis team.

His partner for the exhibition is another Floridian, Mike Halisky, who hails from Clearwater and has been Scott Smith’s top aide at the Vineyard Youth Haven tennis complex for the last five years and recently was the top 35 and over singles player in USTA New England rankings. Halisky has a huge serve and forehand and has been considered one of the Island’s best players since his arrival.

With a crowd of over 110 packed in spectators, the play was stellar throughout the first set as each team held serve until the eleventh game when Matt Browne and Fiddlesticks Country Club assistant pro, Tyler Owens broke serve to take the lead. Despite the pressure to hold and win the first set, both Matt and Tyler hit big shots to win the first set 7-5.

Without a doubt the home team and their fans were stunned to see their team lose the first set. There was an obvious silence; just about everyone viewing the match knew that Matt and Tyler were not lucky to win the first set. The home crowd continued to be optimistic but perhaps less hopeful than before the match began.

Matt and Tyler broke early and never let up and won the second set 6-3 and the match. As the players were exiting the court, the crowd looked shocked that it was actually over!

With Matt playing so well and clearly rising to the big moment, I had to ask Ryler about his game. “Obviously his serve is huge but that forehand is pretty incredible,” he replied.

“If you were coaching Matt, what should he focus on to keep improving as he begins his second tennis season at Furman,” I inquired.

“About the only tip I can offer is to move into the court and try to return the “kicker” earlier,” Ryler explained as he viewed Matt standing too far back on several big serves.

One of the key reasons Ryler Deheart flew up to Martha’s Vineyard was to play the “Open” men’s tournament on the weekend. Smith wanted to add another banner event at his top facility and it was logical to include Matt and his partner. Ironically, Matt wanted to play with Furman teammate Nate Collins of nearby Manchester by the Sea (Massachusetts) but he was injured during a practice session.

With Scott’s help, he enlisted Tyler Owens, originally a Louisville, Kentucky native whose family moved to Ft. Myers after high school. Due to his undefeated record 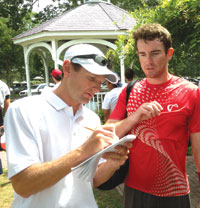 Ryler Dehart, former ATP Tour star and number one collegiate player from the U of Illinois, now assistant coach at the U of Alabama men’s team accepting the runner up prize. SUBMITTED PHOTOS

at the number one position in the Ft. Myer’s Pro League, Owens is considered one of best in the region. He is Jeff Digg’s Head Pro at Fiddlesticks during the winter months and has been a top pro on Martha’s Vineyard for the last five or six summers.

Even though they had never played together, they set up a practice match before the exhibition. During their preparation, they worked on ‘signals’ (used for the serving team to determine where to serve and when to poach at the net) and who would play the deuce court and who would return from the advantage court. Even though Tyler preferred the ‘ad.’ court, he gracefully let Matt stay on that side. The conventional wisdom was to showcase Matt’s huge forehand dip drive which could potentially intimidate their upcoming opponents.

Both the Deheart-Halisky and Browne-Owens teams surged into the semi-finals as they rolled over their rivals. But Matt and Tyler had to face the second seeds; both are solid college players from prominent New England colleges. Last summer, Matt and his close friend Max Eppley lost to this team 12-10 in the third set super tie break as they squandered a solid lead.

But, Matt was confident as he knew his game had risen at Furman and had confidence his new partner was ready to move into the final. However, the Bates College and Lehigh University team felt they could win as well and the score was knotted at 4-4 games all in the first set. Before one could blink, Matt and Tyler took complete control and won 6-4, 6-2. All they needed was to get the first break of serve and they loosened up and controlled the flow of the match.

With Matt and Tyler viewing Deheart’s semifinal contest, both he and partner Halisky wanted to send a message. They destroyed the number four seeds 6-1, 6-1 as they displayed powerful and dominating tennis. It was apparent they wanted to forget about the exhibition loss and prove who really is the top team in this weekend’s prize money tournament.

With another large Vineyard Sunday crowd, nerves subjugated the first seven or eight games; tenseness ruled the court as the players were navigating the tenor of the match. Despite some break points, the score was knotted at six-games all and a 7-point tie break. With Ryler and Mike leading 6-4, Mike hit his huge ‘kicker’ and Tyler returned the ball slow and high as Ryler poached and ripped the backhand volley with tremendous force – – in the net! Noticeably relieved, it was time for Matt’s weapon and he ripped his version of the ‘kicker’ and Mike hit it into the next court. With the tie break tied at 6-6, Matt had another serve and quickly won the point to take the lead 7-6. Matt returned the serve with new confidence and again quickly won the point and the set. For the second time in three days, the crowd stood silent; would the top dogs with the former ATP Tour star lose again to Browne and Owens?

With Matt and Tyler winning three consecutive sets against Deheart and Halisky, they were calmly self-assured and ready to win the second set. They immediately broke serve to start out the second set which propelled them to a comfortable 6-4 victory. So, the unheralded team from sunny southwest Florida is now the team to beat in beautiful Martha’s Vineyard. Stay tuned – -This tournament returns next July in Oak Bluffs.